A semipermanent parklet found its second semipermanent home last week in Bricktown. The tiny, parking spot-sized park, or parklet, was recently installed in front of the Painted Door shop in Bricktown, and shopowner Avis Scaramucci loved it. Its stay was short but special, as Bricktown organizers announced late last week that, due to streetcar construction, the diminutive retreat found a nearby niche at the north end of Mickey Mantle Avenue.

“It makes people smile,” Scaramucci said. “It is so unexpected and just so charming to sit down and enjoy your coffee in a tiny park.”

The first documented parklet was created in 2005 in San Francisco.

“Now, San Francisco has a ton of parklets, and so do other cities on the coasts,” said Jill Brown DeLozier, Downtown OKC, Inc. (DOKC) vice president. “We’re calling our new one in Bricktown ‘semipermanent’ in that we are essentially leasing the space from the city in 90-day increments, but our plan is for it to be there indefinitely.”

Downtown OKC, Inc. must apply for a new permit every 90 days and also pay for the parking space to be hooded, or taken out of public inventory, which costs about $30 per day. The organization hopes to add a new, semipermanent parklet every year to 18 months.

“There are several locations in the running to be the next parklet,” Mallory O’Neill, Bricktown District Manager, said. “Foot traffic is one of the primary drivers of where; possibly Midtown and possibly Automobile Alley.” 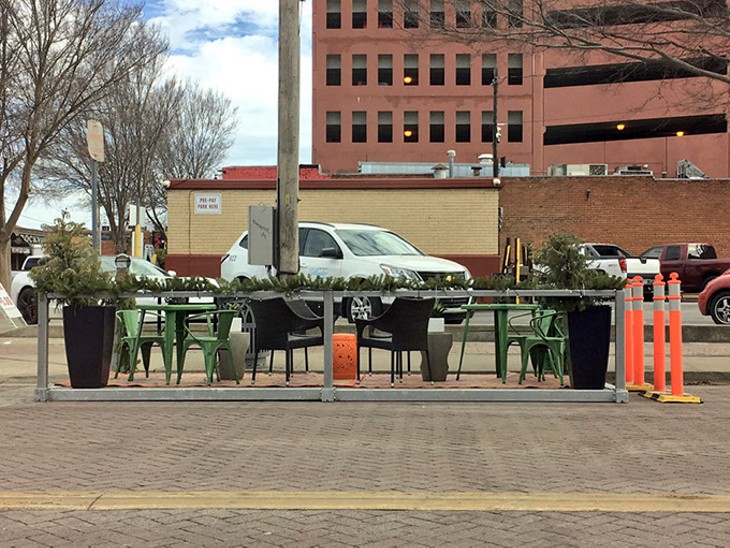 Nonprofit DOKC, created 17 years ago to manage and market the downtown Oklahoma City Business Improvement District and advocate for revitalization, plans to eventually have one or more parklets in each of the city’s eight districts.

Parklets can be applied for and installed by anyone who meets the City of Oklahoma City’s permitting requirements, and they’ve popped up at localized events over the past several years.

“In other cities, all sorts of groups install them,” DeLozier said. “[We] hope that others will be inspired to create parklets too.”

In September 2013, DOKC installed two temporary parklets and helped 10 others gain permits as a part of the annual international PARK(ing) Day event, a day set aside to celebrate the transformative powers of placemaking in urban environments.

“Placemaking is all about creating public spaces that are accessible to everyone for the benefit of the whole community,” DeLozier said. “Things like accessibility, safety and visibility are all very important in projects like this.”

What is a parklet’s purpose? Placemaking, improved walkability and calming traffic. Then there’s just the whimsy of it.

“Vehicles and pedestrians both slow down and look at it,” O’Neill said. “It’s been fun for us to see how different people use the parklet during different times in the day.”

DeLozier and four colleagues installed Bricktown’s semipermanent parklet in a matter of hours using a prefabricated parklet kit, which costs about $12,000.

“We had to think about how to furnish it, how to maintain it and what to do if its components are stolen or damaged,” DeLozier said. “The public really seems to feel ownership of the space. … People are taking care of the space.”

As a business owner, Scaramucci said she embraces the concept.