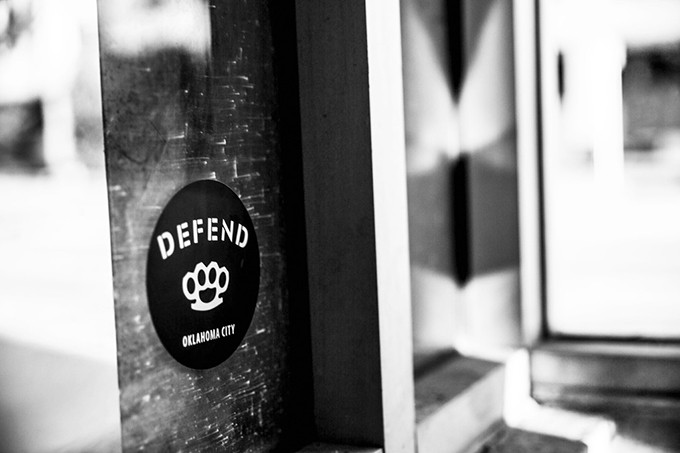 A logo of brass knuckles and a mission statement some believed romanticized the state’s land run history helped contribute to widespread social media suspicion the fledgling Defend OKC T-shirt and lifestyle brand represented — or at least was sympathetic to — white supremacist ideals. The brand has repeatedly refuted the association.

“I’ve explicitly reiterated to anyone who has asked that I’m not interested in white supremacist beliefs because I am not,” Defend OKC founder Timothy Warren told Oklahoma Gazette via email exchange.

Though Defend OKC’s original “about” bio has since been removed from its online store, it originally stated that “since 1889” — the year several prominent land runs opened Oklahoma’s Indian Territory up to claim by white settlers — the city has been a place hard workers could stake ownership.

“This opportunity for ownership is available to those who are willing to work for it,” the bio said.

There were other reasons people associated Defend OKC with white nationalist ideals. Citywide attention around the brand first grew when Defend OKC stickers started popping up around the Midtown and downtown areas. For a time, the brand was promoted on the Instagram account of a blog called Folk and Fork, which claims to promote traditional European culture and classic gender roles.

Folk and Fork’s post promoting the brand has since been removed at Defend OKC’s request. The blog’s Instagram account has gone from public to private. Its bio says the move is to “avoid a witch hunt.”

Warren told Gazette that the only thing his brand is interested in defending is OKC’s unique architecture and sense of pride.

“I went through the broody teenage angst of feeling like OKC was an old crusty place that progress had passed by,” he said. “But since growing up and starting a family, I’ve come to appreciate the cultural history of the city and want to cultivate (and defend) a sense of ownership and responsibility for the growth we want to see happen here. The ‘defense’ comes in defending the uniqueness and spirit of the city itself, not against anyone or thing in particular.”

The primary thing driving suspicion of the brand’s possible covert white power goals was a Twitter post by Paul Zimmerman, a former friend of Warren and his family who claims he grew apart from them after he heard Warren and his brothers express conspiratorial political views and opinions on the existence of fundamental differences between the races, with which he disagreed.

When Zimmerman became aware of Defend OKC and its messaging, he said his mind immediately reverted back to those alleged conversations. On Twitter, he posted several screen captures of photography from Defend OKC’s web store along with a message alluding to past talks he had with Warren and his associates.

“Last year a good friend [of] mine started sympathizing with white nationalist ideas,” Zimmerman wrote. “We met once to talk and they voiced concerns that ‘whiteness was in danger,’ ‘blacks just have different values’ etc. I’ve consistently reached out to them since and no response.”

Whether Defend OKC intended to be just a seller of novelty merchandise or something more sinister, Zimmerman’s tweet helped shape the impression many local social media users had of the brand. Warren was bombarded with questions of whom exactly he wanted to defend OKC against. Many encouraged their followers to remove the Defend OKC stickers wherever they saw them in public.

After his initial tweet, Zimmerman spoke with Warren about the brand and backed off his hard stance on the intentions behind Defend OKC. But Zimmerman and other people he has spoken with remain wary of its messaging. He points to Defend OKC’s Instagram follows, which Zimmerman said at one point included survivalist Varg Freeborn, author of the book Violence of Mind: Training and Preparation for Extreme Violence, and Russian mixed martial arts fighter Nikita Fedorenko, who was charged with organizing a neo-Nazi gang in the country.

“They follow zero architects or designers or city planners [on Instagram],” Zimmerman said. “With the optics and everything, it’s not a reasonable interpretation to look at this and say, ‘It’s just a T-shirt company.’”

Defend OKC is far from a unique brand concept. Warren said the idea was directly inspired by existing brands Defend Brooklyn, Defend Paris and Defend New Orleans. Both the Brooklyn and Paris brands have incorporated the image of an AK-47 assault rifle onto their shirts, but neither has been tied to white nationalism or an advocation of violent means. Both websites claim their brand’s messaging is about preserving their city’s unique identity — though from what they are preserving the city is still somewhat vague.

Warren said he is the only person directly involved in Defend OKC and that other people have been incorrectly associated with the brand online. Defend OKC began about a month ago. Warren said he started it as a way of conveying his excitement for the growth of the city and the hope that it preserves its identity in the process.

“[OKC] is definitely different in the areas of activity and growth,” he said. “When I was growing up, there was a ton of suburb and strip mall sprawl going north and west. My family followed that, and I hated it. After I moved back here several years ago, it’s been very encouraging to see people investing in downtown, Midtown and Uptown areas.”

Warren said the social media reaction to his brand was a lot wider and harsher than he ever could have imagined. He denies an interest in white nationalism and claims Defend OKC does not advocate violence.

“I do not wish the backlash myself and my family members are receiving because of these allegations on anyone else, ever,” he said. “It’s been stressful.”

For now, Warren plans to keep his brand going, continuing to clarify its messaging.

“This was never intended to be an end in and of itself; it was just a project I wanted to do for fun,” he said. “I didn’t have and still do not have a grand vision for Defend OKC other than sell some T-shirts and get people excited about preserving the spirit and uniqueness of Oklahoma City.”

Zimmerman is no longer convinced Defend OKC was founded with clear white nationalist intentions, but he remains concerned about past conversations he has had with Warren and his associates.

The reaction to Defend OKC might be best seen as a study on how things spread over social media and the loss of nuance in the process. The original intent behind Zimmerman’s post was to express his sorrow for a friend he believed had lost his way and to illustrate the proximity of views he deems “dangerous.” He never hoped lives would be damaged in the process.

“It’s a lesson learned for me, too,” Zimmerman said. “I’m mostly bummed that people I’ve been close to in the past have bought into these terrible and dangerous ideologies. Sharing my story in that, the main point is to encourage people that this isn’t a thing that’s way out there. This isn’t a thing that’s only in Charlottesville. People you know are sympathetic to these ideas.”

Zimmerman believes those who would like to eradicate potentially dangerous views in their community would be better off speaking directly with people they know who might sympathize with those opinions rather than drag strangers online.

“Saying stuff on Twitter generally isn’t super effective unless you’re talking to people you have audience with,” he said. “It’s really vitally important that you engage your family and your friends and the people you can talk to. It’s easy to be on the internet and say really hard things to the sky because there’s no consequences to that. There’s also no effect.”

Zimmerman’s post commenting on the latest development in a personal relationship was interpreted by people without the same connection as a plain and static characterization of a group of people and the views they represent. Likewise, Defend OKC’s loose brand messaging seems to have lent itself to uncharitable interpretation.

The large-scale game of telephone that unfolded is something Zimmerman chalks up to the nature of social media.

“The louder a thing gets, the more watered-down it has to be,” he said. “The group that did this thing is probably really frustrated about that, too.”