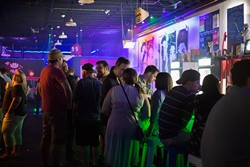 Jose Rodriguez doesn’t remember much about when his parents moved their family from Puerto Rico to Oklahoma, but he remembers Donkey Kong.

“We were poor,” he said. “But when we went to the laundromat every Sunday, my dad always made sure I had a couple extra quarters to play.”

Quarters aren’t required at Rodriguez’s bar, FlashBack RetroPub, the adult arcade concept that opened last fall at 814 W. Sheridan Ave. There, thirsty patrons imbibe local craft beer and fluorescent mixed drinks and reminisce while remastering one of the bar’s 50 retro arcade machines at no cost beyond their drink tabs. 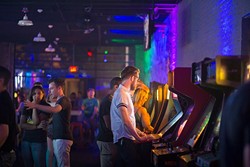 FlashBack creates a feeling of being transported in time. The establishment is a swarm of primary colors and 8-bit sound effects, and its bar area is peppered with kitschy toys, gadgets and pop memorabilia from decades past.

Rodriguez got his start working behind various bar tops in Stillwater, Tulsa and Oklahoma City. He believes his service industry experience gave him valuable insight about what his customers want. To paraphrase 1980s pop queen Cyndi Lauper: They just want to have fun.

“I love seeing people walk in for the first time,” he said. “You can see their faces change as they start recognizing these old games from their childhood. People light up. They’re like, ‘Hey, I totally forgot about that!’”

FlashBack has plenty of games from the arcade resurgence of the 1990s — Mortal Kombat II, NBA Jam, The Simpsons — as well as classics like Pac-Man and Galaga and more than a few forgotten by all but the most devout gamers. There’s also a Nintendo 64 console station with couches and a flat-screen TV, approximating a middle-class family living room from the 1990s.

“Nostalgia is absolutely a big part of the experience,” he said. “It’s what we sell.”

Of course, the “barcade” concept isn’t new. Over the last decade, similar businesses have popped up in cities across the nation, and they can be found as close as Tulsa and the Dallas-Fort Worth metro. The success of these models in nearby markets inspired Rodriguez to launch his own concept on Film Row.

“I was hanging out at one of those places, and I thought, ‘Someone should do this in OKC,” he said. “So I did.”

Rodriguez wants FlashBack to be more than a bar and arcade. It hosts themed events monthly, like its Aug. 20 back-to-school toga party and Aug. 29 ’90s night. He sees FlashBack as an opportunity to offer an experience beyond a typical night out. 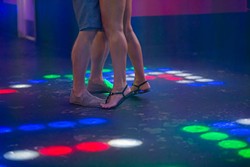 While the events vary from drinking game tournaments to throwback DJ nights and ’80s movie screenings, each is marked by FlashBack’s penchant for the recent past. It continues the bar’s mission as a sort of time warp, whisking patrons back to a time when Madonna ruled the airwaves and the side-scroller was king.

“When I first started talking about it, people said, ‘That will never work here,’” Rodriguez said. “But we’re here, and it’s working.”