Former NFL player and Duncan native Bryce Davis has returned to his home state to bring Oklahoma medical cannabis patients the tastiest medicine he can.

Kola Organics, located in southwest Oklahoma City near the Oklahoma River, debuts its flower later this month in pre-rolls to select dispensaries. By the end of September, Davis expects his new 65,000 square-foot facility to be fully completed.

“Kola is kind of a grower term,” he said. “When you walk into a room filled with cannabis that’s flowering out, the nug that’s the biggest, tallest, fattest nug, that’s your kola. And typically, growers will keep their kolas for their personal smoke and then the rest of the harvest will be distributed.”

Davis said that while they are shooting for strains that yield flower in the 20 percent THC range, their priority is bringing consumers the best flavor possible.

There are 42 strains currently in vegetative state, with 22 of those flowering and another 20 soon to be tested. Davis has been hunting genetics since August.

“They’re all very unique in bud structures, smell, finishing times. In this room, of the 22, we like about seven,” Davis said. “Flowering time is really what I was looking for. And flavor … we already have strains that taste like a cherry, taste like a lime, taste like a blueberry. Our strains are very flavorful already, so we’re really happy with what we got. And we’ll just keep branching off of that and making more. … When a patient opens up a jar or a bag, they shouldn’t even have to see the weed. It should just smack them in the face with aroma and they can tell, ‘I like that because that’s a cheese’ or ‘I like that because it’s lime-y or fruity.’

“Just cycling through all these genetics has been nuts. Yesterday, I took inventory of all of our 1-gallon plants over there on just those three rows, and it took me over three hours just to organize based by strain. We will create our own seed and just forever be hunting genetics down. It’s just like humans; the genetics, they vary so much. They all have different rooting ratios. They have different harvest times. They have different terpene profiles, cannabinoid profiles, flavonoids, but we’re looking for genetics that will harvest in 60 days or under, and they have a great terpene profile because we’re really big on the smell. ... Cannabis is very unique, and if it’s grown from seed like these are, then I’m the only one in the world that’s got these. People don’t understand that a lot of times when it comes to cannabis. They all think every Blue Dream is the same or every Kush is the same. People have got to re-educate themselves and realize it’s not the strain you’re hunting, necessarily. It’s your grower. You want to know your grower, and then you want to know the strain.” 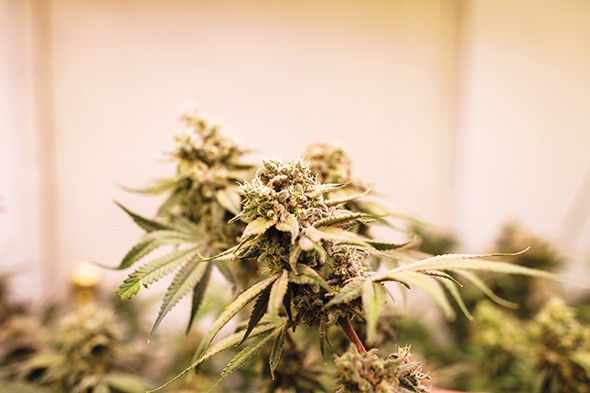 Kola is using only organic soil that will need to be watered by hand.

“It’s an organic living soil that I make from scratch,” Davis said. “Altogether, it’s about 16 different amendments. It’s really what separates us from the rest of the competition is our living soil. The living soil, it really stinks, and that transitions through the roots up the plant into the nugs. So our nugs are really potent in smell where, typically, people are a hydroponic grow. They grow with a liquid fertilizer from a bottle that they’ll put into a media like cocoa. Just like my soil. My soil has cocoa as well, but that’s all they’ll have is a cocoa perlite and then feed it with fertilizers. That doesn’t stink. The buds don’t stink. It all smells the same. Every one in here got the exact same treatment. It’s my soil; we really want to see how I want to react to it.”

Davis makes the soil on-site, and after the cannabis is harvested, more amendments will be added and the living soil will be reused. Once the facility is firing on all cylinders, Kola expects to turn rooms twice a month.

“We’re a two-week production,” he said. “We like to harvest every two weeks. So we’ve got to keep that 60-day mark to keep the rotation going.”

Davis played tight end and long snapper at University of Central Oklahoma before playing two seasons with Cincinnati Bengals and another season with Pittsburgh Steelers. He then moved to Oregon in 2014 and began growing, processing and selling cannabis.

“Originally, I was in the NFL, and I told myself, I gave myself three years in the league and if I hadn’t stuck with a team in that amount of time, I just needed to decide something else to do in life. And I had hunted a bunch of different jobs, and nothing really seemed like something I’d want to do forever, so I just researched some more, found cannabis was healing people all over the world, really,” he said. “And Colorado passed, and at that time, I was like, ‘I gotta get in,’ just because I could just tell it’s the future of medicine.”

He moved back to Oklahoma to be closer to family.

“I wanted to be home the whole time,” Davis said. “The only reason I left was because it was illegal here, and as soon as I realized they were starting to get the bill passed, I came home.”

While the operation is starting small, it intends to get the harvesting window down to once a week and eventually move into processing and running its own dispensary.

“We don’t have a retail front right now,” Davis said. “We’re focused on the manufacturing side. Yeah. Eventually, we would like to get into that. But this is our focus for now.”