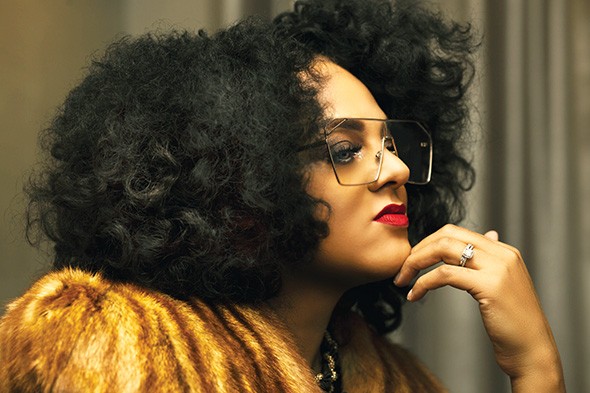 She gave the King of Pop “Butterflies” in 2001, and Marsha Ambrosius has been recording among royalty ever since, but she has never felt like she didn’t belong. And she isn’t planning on going anywhere.

“If there was a level of intimidation, I wouldn’t be even invited to the rooms that I have been so far,” Ambrosius said, “and that’s not an air of arrogance. It’s just being instilled with sureness and this awareness of a gift that I was given. I wouldn’t have been able to tell Michael Jackson what to do for two weeks and have ‘Butterflies’ sound the way it did. … Even though he was that man, he sat me down and said, ‘Look. This is all you. You created a moment that I want to recreate. Show me how.’ And I had to accept that for what it was at the age of 23. … It was absolutely an affirmation that I was on the right path to do what I was going to do. I’m not saying it got any easier for me with, you know, Earth Wind & Fire or Patti LaBelle or Dr. Dre or Kanye or we can list the names. My Wikipedia’s incredible, and that’s just up through 2019. I’ve still got things that I haven’t done.”

Ambrosius — who told Los Angeles Times she wrote “Butterflies” about “a boy [she] had a crush on that worked at McDonald’s” — is scheduled to perform March 7 at Tower Theatre, 425 NW 23rd St. She has also collaborated with Nas, Solange, André 3000, Justin Timberlake and more, but there are still more marquee names she’d like to cross off her list.

Nyla is most definitely, beginning to end, my current movie.Marsha Ambrosius tweet this

“John Williams has been my favorite composer since I was a kid, and I’ve always written music as vivid as that,” Ambrosius said. “I can see the Goonies skating down the hill, riding their bikes on the way to the Fratellis.’ I’ve always looked at film like that. It’s the music that is massive. It’s the two notes that make you feel a level of dread that you’ve never felt, like a shark is going to come into your living room and kill you, like that’s a thing. But it’s what the music makes you feel.”

Formerly half of the duo Floetry, Ambrosius said her solo albums, beginning with her 2011 debut Late Nights & Early Mornings, score her own personal films.

“You can hear a certain chord or a string line or horn line, and you know whether this is going to be sad, happy,” Ambrosius said. “It’s going to be a twist and turn in the story, whether that was ‘The Breakup Song’ or ‘Far Away’ or ‘OMG I Miss You,’ it’s just evoking emotion. They’re all almost diaries of where I’ve been in my life at that place and time.”

Her latest, last year’s Nyla, finds Ambrosius in new territory, with a husband and young daughter, the album’s namesake, but still discovering material to mine from the interior.

“‘Glass’ is me admitting to myself I had to love me more before I move on and feel the love that I had for my husband and my daughter,” Ambrosius said. “My heart just expanded completely, and the level of love that I still receive now is because of my family. That’s the difference between the first album of being young and being fresh, new in the industry and having my first solo album. Now it’s learning all of those lessons and applying that to where I am now, and Nyla is most definitely, beginning to end, my current movie.”

Her current movie also has starring roles for her young family, both of whom are joining her on tour. Any complications that come from wrangling a toddler on the road aren’t as bad as leaving her at home, Ambrosius said.

“It’s not difficult at all,” she said. “It’s actually much easier because it gives me peace of mind. I couldn’t see me traveling without my daughter or my husband, so I’m thankful that we’re able to make it work. I’m still on mommy duties, and wife duties at times, and it’s still exciting.”

She chose to release Nyla on her own after leaving RCA, and she said she isn’t missing the record label because she has built an independent and personalized support system with modern tools.

“For me it’s no different because I have fans that have been working with me since open mics in the UK in 1996,” Ambrosius said, “so being able to connect with people now with the advances of technology and having a direct connect, whether that’s through Twitter, Instagram, Facebook. Social media kind of gives you an inkling as to what people are saying and what people are doing, not necessarily publicity rollouts, if you will, that would be, you know, what your major label would have done. ... For me, it’s just being able to get to the fans directly and the response has been overwhelming, this tour being a result of that and everyone really showing up and showing out and most shows being sold out and people still buying the CD when they get there. So it’s like we’re going gold and platinum on the road selling our independent CDs as we go. So it’s been an amazing thing to be able to do at this point in my career to have that much more control than I did.”

Fans worrying Ambrosius’ contentment will dampen her creativity shouldn’t be concerned. Her movies still contain extreme close-ups, and human emotions are too complex to capture in fuzzy monochrome.

“There’s too much going on in the world for me to just concentrate on the sunshine,” Ambrosius said. “I think when I fell in love for real, that was the most terrifying feeling I felt in my life. People are like, ‘What do you mean terrifying?’ It’s like then I knew it was absolutely real, and it scared me. And I use that as fuel to evoke a level of emotion that I hadn’t had been to. It’s holding on to it all, now that I have exactly what I sought out to do and who I’ve become because of it. How do I hold on to all of it? And that’s where the good music happens.”