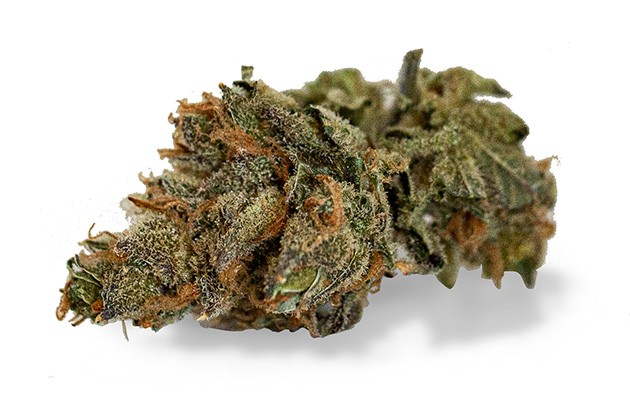 Review: This is one of those buds that appears out of focus when you look at it due to the trichome density, a trait similar to other strains grown by Greener Pastures sold exclusively at Planet Hollyweed. A second, closer examination using a Smokus Focus lighted jar revealed that the trichomes causing the almost furry appearance are hook-shaped in a manner that resembles Velcro. Splitting open the nug by hand before putting it in the grinder revealed that it was also frosted through and through. The earthy smell intensifies once ground, while minimizing the sweet scent. The smoke was mildly sweet but also very smooth and never got harsh even as the bowl was close to being cashed. The high itself was pretty mellow but a definite mood-lifter characteristic of most hybrid strains. The parents of this strain are also two hybrids, Ghost OG and Skunk Haze, but the result leans toward an indica-dominant strain. This one did not tire me but definitely chilled me out. It’s a strain for any time in the day, but it’s particularly geared toward relaxation.

Cannabis effects vary wildly from patient to patient based on a multitude of factors, including THC tolerance, brain chemistry and personal taste. This review is based on the subjective experience of one patient.