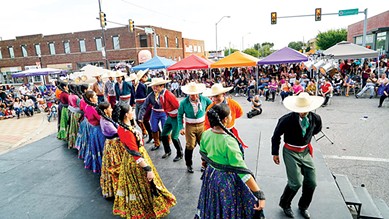 International globetrotting can be expensive and time-consuming, but you can share experiences from several of the countries on the North and South American continents and even get a passport stamp without leaving OKC’s Capitol Hill District. Travel the Americas!, a new event at the 13th annual Fiestas de las Americas cultural festival, follows the traditional parade, which begins at 10 a.m. Sept. 29 in the Capitol Hill District near the intersection of SW 25th Street and S. Harvey Avenue, and local cultural organizations will have informational booths set up where visitors can learn about life and traditions in other countries. Children ages 5-12 will receive “passports” they can use to collect stickers from each booth they visit. Participants with full passports can enter a raffle to win prizes.

“There are groups from different countries, immigrants and people who come here who represent the cultures from Guatemala, Colombia, Peru, Mexico,” said Historic Capitol Hill director Donna Cervantes, who has been involved with the festival for six years. “They have strong ties to their culture, and they love to show it off with the food, music, traditional costumes and, of course, the folkloric dancing is important. So we’ve been trying to find ways to allow them to feature their talents … and unique things about different cultures. This will be a way that people can get to know them, get them engaged.”

The new tourist-themed activity will also give visitors another reason to stick around after the parade to enjoy the rest of the festival, scheduled to continue until 8 p.m.

“We do begin the day with a parade, but within a couple of hours, it’s over; people disperse,” Cervantes said. “We’re inviting cultural groups and student organizations as well, to have a free booth where they can set up and engage families with some type of activity. We’ve asked them to feature something unique about their country — a game, an activity, crafts, coloring. One group will do paper flower making. One will do the sugar skull decorating with the Day of the Dead theme from Mexico. We have a group from Peru; there’s some kind of game that involves a guinea pig that I’m really anxious to see.”

"It’s featuring Hispanic culture, but it’s really open and inviting everyone to come experience it." —Donna Cervantes tweet this

“It’s almost like a guessing game where you’re trying to find out where you think the guinea pig will go,” Cervantes said. “It looks hilarious. No animals will be harmed.”

“Kids like to learn by touching and seeing and take-homes,” she said. “It’s always fun if you can take something home and say, ‘Look what I made.’”

Live music and dance performances will return this year, as well, Cervantes said, but the stage has been moved from the north side of the intersection to the south in order to incorporate a new mural.

And of course, the Parade of the Americas will kick things off at 10 a.m. with floats, cultural dance groups and student marching bands. More than 50 groups are scheduled to participate.

“People take this seriously,” Cervantes said. “They get excited about preparing their floats. … There are some that are just so colorful. The beauty really shows, and it comes out great in photographs.”

The parade’s grand marshals for 2018 are Rosa King and Randy Quiroga-King, founders of Oklahoma’s El Nacional newspaper. A festival queen and king will also be crowned, and artists and vendors will be selling handmade and imported goods in the marketplace. The festival expands each year to incorporate more events, activities and community organizations while retaining its most popular attractions, Cervantes said.

“I would say it’s always a mix of old and new,” Cervantes said. “We’ll have classic cars represented, our lowriders in the parade. Those will be a big hit. It’s a good representation of all parts of the culture, the community, different countries. It’s really for everyone. This is an experience that we want to be welcoming to all. It’s featuring Hispanic culture, but it’s really open and inviting everyone to come experience it.”

The festival is also a chance to highlight the Capitol Hill District and Oklahoma City’s Hispanic community. Cervantes, who participated in folkloric dance performances while attending high school in California, said the community and its traditions and celebrations were vital in helping her feel like she belonged when she moved to Oklahoma City several years ago.

“Coming here to Oklahoma, I think I was looking to get involved in that part of the community, so when I found south Oklahoma City and all the vibrancy here, I was hooked,” Cervantes said. “I like the people. I like what’s going on with the diverse culture in the community. That’s been a great experience.”

Over the years, her favorite part of the festival has remained the same.

“I love the folkloric dancing,” Cervantes said. “I love the music, the action, the costumes, and it includes a lot of kids. To see kids involved really makes me happy. It shows a bright future.”