Girl Scouts Western Oklahoma will soon break ground on a new camp with a focus on STEM programming. 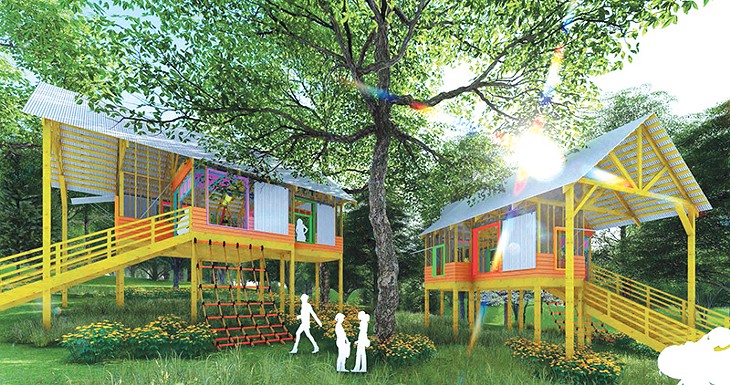 Imagine a high-tech camp where every aspect of the property is built to help young women engage with science, technology, engineering and math (STEM) programs and a new potential learning experience waits around every corner. There’s a rock wall in the cafeteria, a zip line and treehouses for stargazing.

In 2016, the organization learned that its previous camp, Camp Cookie-land in Newalla, Oklahoma, was in the crosshairs of a proposed Oklahoma Turnpike Authority route.

Girl Scouts Western Oklahoma CEO Shannon Evers knew changes would need to be made. Evers invited a group of 50 Girl Scouts to speak with representatives from Oklahoma Turnpike Authority. The scouts then held a lock-in to evaluate and debate the issue.

Evers said the occasion was used as a time to teach the scouts advocacy and accountability, allowing them to ask questions and eventually make a recommendation to Girl Scout Western Oklahoma board members. They decided to sell the camp.

Although Evers said it was a difficult decision, consensus was that Camp Cookieland was no longer capable of serving modern-day Girl Scouts’ needs, and they decided to look to the future. However, Evers said she warned her scouts repeatedly that it could be a while before a new camp was built.

“It’s the perfect marriage between the vision of getting girls outside to explore nature and learn about their environment combined with STEM.” — Shannon Evers tweet this

“And I said that four different ways, four different times,” Evers said. “And finally, the last time I said it, one of the girls was like, ‘Miss Shannon! I get it! Move on!’”

In the interim, Girl Scouts Western Oklahoma held day camps in its Oklahoma City offices. Evers said one day, she was sitting in her office and saw something flash by her window.

“I looked down, and [the scouts] were knife-throwing,” she said.

As the search for a new camp continued, Evers said she heard rumors about a large parcel of land near the zoo that was being considered for “glamping” — high-end camping.

Evers immediately visited the land and said she fell in love.

“It’s such an amazing site,” she said. “It’s got topography. It’s got amazing trees. We just found a tree that’s over 100 years old that’s dying that we’re going to bring back and save.”

Planning proceeded from there. Now the goal is to break ground early next year. Construction should take about 18 months.

“It has every element that you would think a Girl Scout camp would have,” she said. “From amphitheater and fire pits and tent camping and high-adventure activities.” 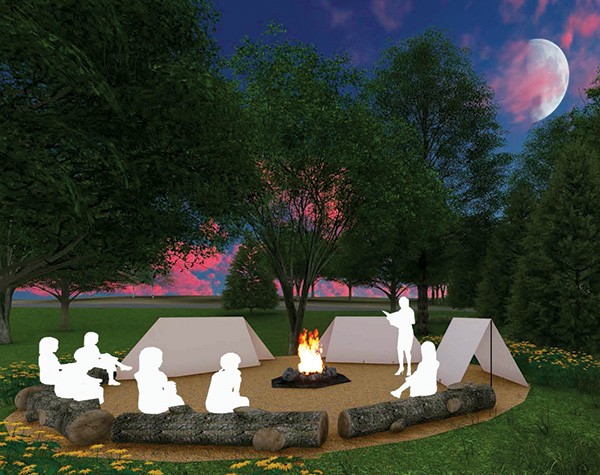 But the camp also has numerous “STEM surprises.”

Many of the new and traditional camp activities will have a STEM angle. For example, if a Girl Scout takes the planned zip line from the camp to the zoo, she will learn about physics and flight. The indoor climbing wall will integrate a geology and archaeology lesson.

Evers said she’s particularly excited about a large electronic interactive display they’re calling the Wall of Women. Girl Scouts will be able to explore careers in STEM fields and see the backgrounds of women already in those fields. This will connect to the camp’s curriculum and allow them to earn badges in areas of interest.

They have also discussed putting in some Plexiglas walls so infrastructure like plumbing and wiring are exposed. Even the bathrooms and elevators will have STEM elements in them.

“There’s so much science that happens in a bathroom,” Evers said. “Girls need to understand, like when they turn the hot water on — how did that happen? Where did that come from, and why was it instant?”

Evers explained that within Girl Scouts of the USA, a goal has been set to draw 2.5 million girls into STEM fields by 2025. Locally, Girl Scouts Western Oklahoma would like to see 8,000 girls in STEM activities per year.

“And hopefully,” Evers said, “if we can just get 10 percent of those girls interested in math and science to take the next step to go into trades or careers in STEM fields, it would be game-changing for our state.”

The other major goal of the new camp, Evers said, is simply getting girls to go outside. She explained many modern-day activities are indoors and sedentary.

“This camp that we’re building accomplishes both of those things,” Evers said. “It’s the perfect marriage between the vision of getting girls outside to explore nature and learn about their environment combined with STEM.”

Overall, it will be a more modern take on Girl Scout camp. In the past, camps have been “unplugged,” but now scouts will be allowed to keep their phones or tablets. There will also be indoor bunks for those uncomfortable with traditional outdoor camping.

Evers said they plan to open the facility to the public when Girl Scouts are not using it as a camp. School field trips, company retreats, weddings and other events could take place on the property during portions of the year.

The camp is not yet named, but this summer, Girl Scouts Western Okla-homa accepted the public’s suggestions. They are currently going through the roughly 130 submissions and will soon choose a crowd-sourced name.

The cost of the new camp is estimated at $12.2 million, and although some funds were secured through the sale of Camp Cookieland, Girls Scouts Western Oklahoma will be fundraising throughout the next year to cover the difference.