Introduced to many through instructional books showing how to fold simple cranes or hopping frogs, the centuries-old Japanese art of paper folding known as origami is more complex than children’s crafting projects might suggest. Into the Fold: The Art and Science of Origami, an exhibition on display at Science Museum Oklahoma, 2020 Remington Place, through January 2019, shows the intricate interplay between artful paper folding and advanced math and science with uses in biology, architecture and space exploration.

“Most people are familiar with origami in one way or the other, and mostly they’re familiar with paper boats or trains or simple folding they might have learned in school or from books, but in the last 30 years, it’s really grown and expanded from that into something more complex,” said Scott Henderson, director of the museum’s smART Space galleries. “There’s a lot of new principles that have been discovered by studying the natural world, and some of these things are being applied in medicine and space technology and architecture and the list could go on and on, and it’s still growing.”

Henderson said displaying advanced origami is a “perfect” use of the smART Space galleries, which are intended to show visitors “the crossroads of science and art.” Into the Fold features origami works by local and international artists, many of whom are trained scientists. Renowned origami artist Robert J. Lang, for example, is also a Caltech-educated physicist who worked with NASA’s Jet Propulsion Laboratory (JPL) to design a solar array that can be folded and compacted into a small rocket. The array is about 8 feet in diameter when folded, Henderson said, and 82 feet when deployed. Lang also helped design the prototype for the Eyeglass Telescope, which would have a foldable lens that would expand to the size of a football field.

Other applications include self-assembling robots, expanding heart stents that can be inserted without surgery and even origami on a cellular level, folding proteins in an effort to combat cancer, HIV and other diseases.

“If you look at flowers, insects, many different things in nature have folding patterns,” Henderson said. “Even our DNA is a folding pattern. Our protein structures are also folded, so it goes pretty far in research.” 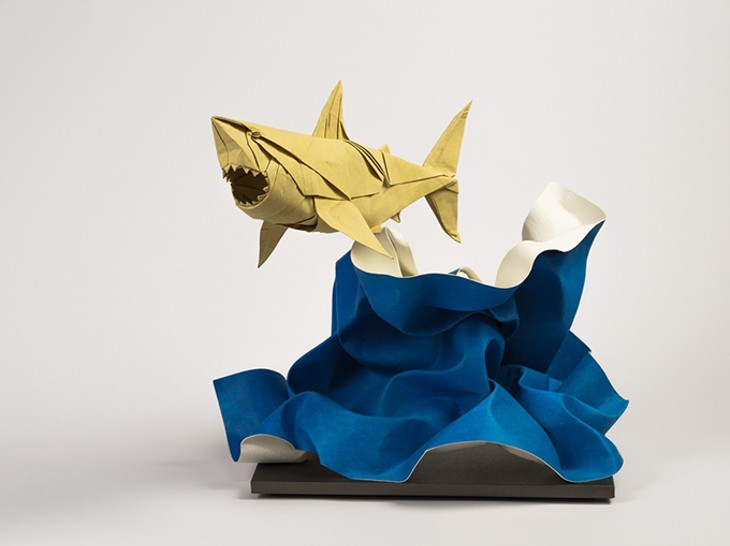 Into the Fold features examples of origami’s applications in engineering, architecture and fashion, Henderson said, but it also includes many works of art made with advanced methods including Lang’s work constructed from laser-etched patterns and Japanese computer scientist Jun Mitani’s intricate creations made with his 3-D modeling software.

“If you see some of these folding patterns, it’d probably blow your mind. The directional stuff you see in books, step one through 12, and you think that’s hard — you should see some of these complex patterns and how difficult it really is,” Henderson said. “It’s something that people will look at and say, ‘Wow! I had no idea that this is origami.’ They look at some of these things, some of these objects in the show, they probably wouldn’t know it’s origami unless it was explained to them because they’re so complex and they don’t really look like folded paper.”

Other works on display use variations of traditional origami methods such as wet folding using damp paper and modular origami made from many pieces fit together. A modular snakelike piece by Eric Gjerde was created using tessellated origami, a method repeating a geometric pattern that allows for large, striking pieces.

“When unfurled, it reaches to about 80 feet long,” Henderson said. “It’s very complex and it’s usually displayed on the floor or on some sort of tabletop, but we decided it would be a lot more interesting attached to the wall, kind of serpentining around the actual wall itself. It’s a good entry point. You can see it pretty much from all angles.”

Reptoid, created by Massachusetts Institute of Technology professors Erik and Martin Demaine using a circular folding method, looks more like an abstract sculpture than folded paper. A mask created by Joel Cooper is accompanied by a step-by-step illustration of the process for making it just to show visitors that it is, in fact, origami.

“It looks almost woven or like someone pressed it against a mold, but in actuality, it’s just one sheet of folded paper,” Henderson said. “And whenever I tell that to people, they are blown away. They can’t believe it.”

Henderson completely understands. When he first began studying contemporary origami for the exhibit, he couldn’t believe some of these works himself.

“When I started to research and discover what was out there, it blew me away,” Henderson said, “and I was like, ‘I have to do this. I have to see if I can get in touch with these people and these artists and these scientists and come up with a show that’s comprehensive and engaging, and I think we succeeded.”

Local artists featured include Klint Schor, whose large bird greets visitors at the exhibition’s entrance; Zephyr Andrews, who created the lifecycle of a caterpillar metamorphosing into a butterfly; Jianlan You, whose handmade cranes are only a few millimeters tall and are best viewed through a magnifying glass; and Larry Dean Pickering, whose functioning origami chairs can be sat in while visitors watch an instructional video. Created by Israeli artist Miri Golan, the video gives viewers a hands-on introduction to the art of paper folding, teaching them to make a jumping frog.

“That’s why I think this show is very important,” Henderson said. “It draws people in aesthetically with the beauty and the shapes and the forms, but it also can spark that interest in learning more.” 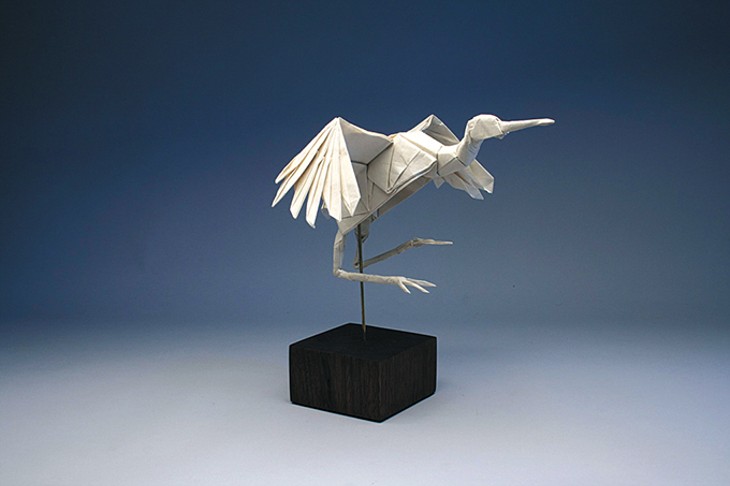 Into the Fold: The Art and Science of Origami

Arts Science Museum Oklahoma origami Into the Fold: The Art and Science of Origami