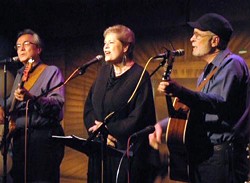 Billboard’s top songs list for 1965 includes few surprises. It is populated with now-iconic names: The Beatles, The Rolling Stones, The Temptations and The Supremes. Alongside British Invasion bands and Motown elite, an almost-forgotten folk music revolution mushroomed.

The Communist witch hunts of the McCarthy era damaged the genre’s growth and popularity, and pulled legends like Pete Seeger into confrontation with the House Un-American Activities Committee. Rather than stop making music, though, artists like Seeger taught the next generation to play and write it. That investment paid off with the folk revolution of the 1960s.

In the mid-’60s, We Five was a San Francisco-based folk act. The group’s song “You Were on My Mind,” a remake of Ian and Sylvia Tyson’s tune, reached No. 3 on Billboard Hot 100 in 1965. By year’s end, it was ensconced at No. 4, between the Stones’ “(I Can’t Get No) Satisfaction” and The Righteous Brothers’ “You’ve Lost that Loving Feeling.”

Jerry Burgan played guitar in the original We Five — the band’s personnel changed dramatically after 1967. Fifty years after the success of “You Were on My Mind,” Burgan is touring again. Thursday, he will be in Edmond at the UCO Jazz Lab to present The Burgans & Chan Songs & Stories Concert.

Burgan and his wife Debbie stopped touring in 1981, after the birth of their second child. Debbie Burgan assumed the female lead role for We Five in 1968 when Beverly Bivens left the group. The couple attempted to keep the band going, and they did record two more albums.

“We did most of our touring from 1965 to 1975,” Jerry Burgan said. “Disco was on the rise, and the available venues went through a huge shift. All the large clubs that could hold 500-600 people were closing down. We had to decide whether to live on the road or let go of touring.”

The couple slowed down considerably before hanging it up nearly completely in 1981.

“I went to school, finished my degree, worked in the pharmaceutical industry for 25 years, and on Sundays, I led a worship team at my church,” Burgan said.

Burgan would eventually turn his storytelling ability into a book. He sat down and told his story and the story of the folk revolution to Alan Rifkin, and the two published Wounds to Bind: A Memoir of the Folk-Rock Revolution in 2014. The title comes from the last line of “You Were on My Mind.”

The Burgans enlisted the assistance of bassist Tholow Chan to begin a book tour of sorts.

Burgan runs through lists of folk musicians and their relationships to each other and the music like a tribal storyteller. He is an oral archivist, which is what folk music has always tried to do: chronicle the human experience from the perspective of common folk.

Thursday’s show features the Burgans and Chan playing music and telling the stories behind the songs and when folk mattered to the population at large almost as much as rock and R&B.

Print headline: Folk show, The Burgans left behind fame and touring for a stable life, but now, they’re back.