McKnight Center for the Performing Arts fosters excitement around the state before its October opening. 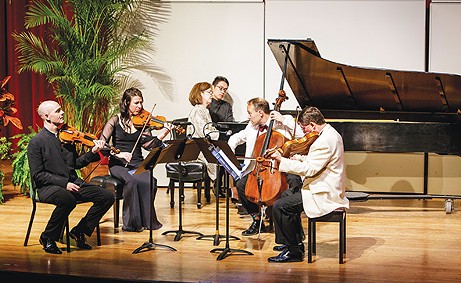 Oklahoma State University’s McKnight Center for the Performing Arts is scheduled to open in Stillwater in October, but Oklahoma City music lovers can get a sneak preview eight months early.

Mark Blakeman, the center’s Marilynn and Carl Thoma executive director, said the event is intended to show patrons the kinds of cultural opportunities that will be available later this year at McKnight Center.

“Our strategy in presenting chamber music before the center opens is to take world-class musicians to different communities in the region to start to introduce people to the types of programs that we’ll have once the center opens up,” Blakeman said. “So the festival has a series of what we call ‘soirees,’ but they’re house concerts, really intimate settings mostly in private homes.”

Blakeman said this type of intimate concert was common for centuries.

“These soirees like the one we’re doing at the boathouse in Oklahoma City, they’re born out of this really long-standing tradition that goes back hundreds of years, house concerts, where people would gather in someone’s home,” he said. “Lots of times, there would be great wine and incredible food and a really intimate performance. And you know, we’re essentially recreating that type of setting with all these soirees that we’re taking to these different communities.”

Prokofiev was educated in Moscow and St. Petersburg and spent time in Germany, France and the U.S., but he was born in 1891 in a rural part of what is now Ukraine. He composed his flute sonata in 1943 at the behest of the Stalinist USSR while he was working on the score for director Sergei Eisenstein’s epic historical film Ivan the Terrible. Dvořák, meanwhile, was born in Bohemia in 1841, and his travels led him to find inspiration in traditional music made by people in Europe and North America.

“He was from the area that is now Czechoslovakia, and he was a huge advocate of Czech folk music,” Blakeman said. “He very much incorporated that into the repertoire that he composed over his lifetime. He was a big advocate for the music that was born from the indigenous people that live in that area, and then he came to New York … and he spent a number of years in America, mostly headquartered in in New York, but he traveled throughout the Midwest. … He brought that same enthusiasm and inspiration to America, and he started to really champion American folk music. He spent a lot of time kind of investigating and learning folk tunes that were born out of the Native American tradition and out of the African-American traditions, and he infused that into the music that he wrote while he was living here in the United States.”

Dvořák’s New World Symphony is probably his most famous piece inspired by American folk music, but his piano quartet, like Prokofiev’s sonata, was influenced by indigenous music.

"Sometimes people can get intimidated by classical music or there are certain expectations that sometimes are misguided."—Mark Blakeman tweet this

“It’s done in different ways,” Blakeman said. “It could be little musical motifs that are found in folk music. It could be could be rhythmic elements that you find in traditional African-American music or Native American music. Composers find different ways to take these sources of inspiration and incorporate them into these different pieces.”

Since artists are always looking for new sources of influence, Blakeman said, anything they hear might become part of a composition.

“Composers, they find inspiration from a lot of different sources,” he said. “There are composers who sat out in nature and tried to notate the birds singing in the trees and infuse that into the music that they were composing.”

In some cases, Blakeman said, composers interested in folk music helped preserve and spread the traditions decades before they could have been electronically recorded.

“What’s interesting about them capturing and infusing folk elements or any kind of indigenous form of music is that 200 years ago, before the recording devices, you really had to listen to these things aurally,” Blakeman said. “You had to sit and hear them, and because, perhaps, they weren’t notated and just got passed down generation after generation. In some cases, it took a classically trained musician who could take those things that they were hearing and then transcribe them so they could be notated. It kind of canonizes some of this music, puts it on paper for the first time.”

The Oklahoma City soiree will begin with wine and appetizers, followed by the concert and concluding with a catered dinner with the musicians. By presenting these compositions as part of a dinner party, Blakeman said the center hopes to make the music feel more accessible.

“All of our visiting artists, we sprinkle them around the tables with all of our guests,” Blakeman said. “So many of the people that attended the Chamber Music Festival last year, in addition to the incredible music, one of the things that they really loved … was just being able to really have this personal engagement and interaction with these artists that travel the globe and play with the best orchestras in the best venues on the planet. … That’s one of the really special things about these soirees is that it’s really informal. Sometimes people can get intimidated by classical music or there are certain expectations that sometimes are misguided. They think they have to dress up real fancy and go to the symphony in a limousine and all that kind of stuff. And, of course, that’s not true.”

The soiree is more business casual than black-tie, Blakeman added. Tickets are $200 and available at mcknightcenter.org.