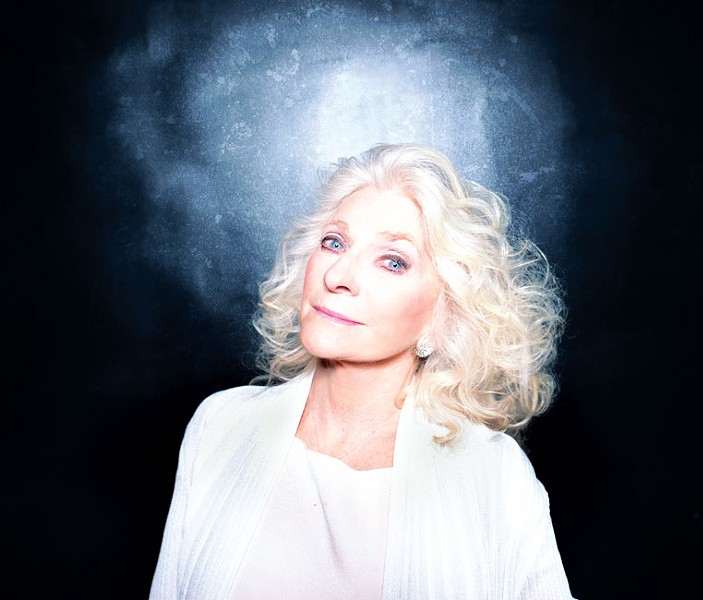 Whether it should be called fate, luck or another instance of talent and preparation meeting opportunity, folk legend Judy Collins’ encounter with and approach to Stephen Sondheim’s poignant show tune classic “Send in the Clowns” helped build her career to where it is today.

Sondheim — the iconic Broadway composer and lyricist most known for his immortal musical contributions to 1957’s West Side Story, ’62’s A Funny Thing Happened on the Way to the Forum, ’79’s Sweeney Todd: The Demon Barber of Fleet Street and many more — penned “Send in the Clowns” as a reflective and emotional second act ballad for the 1973 musical A Little Night Music. The song eventually found its way to Judy Collins, a classically trained musician entranced by the national folk revival in college and rose to relative prominence as a singer-songwriter in the folk world by the late ’60s.

Collins will also be forever linked to late Canadian folk legend Leonard Cohen for discovering the young songsmith and helping establish his career, favors Cohen repeatedly repaid for her as his own fame swelled years later.

Collins’ version of “Send in the Clowns” appeared on her ’75 album Judith and spent several weeks on the Billboard pop singles chart. Her cover earned Sondheim a Grammy for Song of the Year in 1976.

Decades later, Collins is still singing Sondheim’s praises, not just for his contribution to her career, but as a gifted poet in his own right. In 2017, she released a tribute album to the composer entitled A Love Letter to Stephen Sondheim. A live version of the tribute has been broadcast on public television and still tours across the country.

Collins recently spoke with Oklahoma Gazette about Sondheim, her unique relationship with Cohen and the undeniable power of good storytelling.

Oklahoma Gazette: The way I’ve heard you tell this story in the past, you were not familiar with Sondheim or his work the first time you heard “Send in the Clowns.”

Collins: Not at all. I didn’t know what A Little Night Music was; I didn’t know anything about him. I was busy making Amazing Grace and “Both Sides, Now” and “Someday Soon” and so on and so forth. I was brought the album by a mutual friend — mutual with Leonard Cohen — Nancy Bacal, who was Leonard’s best friend. He introduced us pretty shortly after I first began working with Leonard. So I had known Nancy for a long time, and she had this exquisite taste. She sent this album over to me and said, ‘I think you better listen to this song’ and it was “Send in the Clowns.” I called (famed Broadway producer and A Little Night Music director) Hal Prince and said, ‘You have a great song on this album.’ He said, ‘Yes, it is good, isn’t it? About 200 people have recorded it already,’ and I said, ‘I don’t care.’

OKG: But eventually, you did get to meet with Sondheim, right?

Collins: Oh, sure. I’ve known Stephen for years. But, you see, we have to separate the man from the songs. The songs have their own destiny; they have their own function. Once you get a song out of your head and you record it — or have it recorded, in the case of Sondheim — it becomes a property that finds its own way to the people who are supposed to sing it. It comes to its own fate, in a way. I believe in the song. Human beings are frail and imperfect; songs are impeccable and perfect. They can’t be swayed with flattery and can’t be challenged with assault or accusations. They live on their own terms.

OKG: That’s very true. You’ve probably experienced firsthand how songs you’ve been a part of or written have taken on a life of their own that transcends you.

Collins: Yeah, that’s right. My friendship with Leonard Cohen was very different. I knew him very, very well as a friend, as a mentor, as a genius, as somebody who was unbelievably generous to me in all ways. There was never an article with Leonard Cohen where he did not talk about how Judy Collins had discovered him, recorded all of his songs and continued to do so over a period of 50 years. That’s not something usual. Most people are much less generous and much less excited to share and talk about how this all came about. … Most people write a song, and then maybe they sing it to you and you never see them again. You make it a big hit, and then they diss you on Facebook. It is extraordinary. But you’re right, the song transcends the frailty of man — or woman.

OKG: Sondheim is, of course, a fantastic lyrical storyteller, especially for theater. How do you compare the writing you find in theater lyrics to someone like a folk singer? Is there a close comparison?

Collins: Well, yes and no. Someone asked me recently how was it that a classically trained musician would turn to folk music. I said, remember, [American composer] Aaron Copland flagrantly used the songs of the folk tradition. Appalachian Spring, of course, features the traditional Shaker song “Simple Gifts.” ... There are many similarities between what becomes the most effective and transcendent folk song and what becomes the most transcendent song from something like My Fair Lady. It has to do with melody, it has to do with content, it has to do with how personal or touching it is. That’s what you have to look at. You don’t look at the genre, the category, the cliché type of thing it is. You look at the quality of the song itself. … My gauge for what to sing has nothing to do with genre or where it came from; it’s whether it talks to me personally. If it talks to me personally, I’m going to sing it. If it doesn’t, I never want to hear it again.

OKG: So, what you’re saying is, regardless of genre, there’s this underlying poetry or sentiment that transcends everything.

Collins: Absolutely. It’s an aesthetic. Back in the old days, the radio stations — particularly the FM stations around the country — would play what they wanted. They played all kinds of things. They played dance music, Roy Orbison, [Johann Sebastian] Bach, the country songs that were famous — they’d go all over the map. But now we have different places to go to hear what we like. Now you have the ability to build your own library from iTunes and all the different streaming services. People have all kinds of things on their phones and iPods now: orchestral, vocal, rap. It shows that there is an underlying sentiment within the composition that decides whether you like it or not.

I do think Sondheim is unique in a lot of ways in that he really transformed Broadway and allowed people to really talk about things in Broadway musicals. That wasn’t necessarily the case before. I think he’s made a huge impact not just on Broadway, but on music in general. I think there are a lot of undiscovered songs in Sondheim’s repertoire that ought to be much more popular than they are.

OKG: Do you think storytelling is still as valued in music today as it was in the past?

Collins: People tell their own stories. They may not come off very well or they may be inaccessible because of the electronics that interfere with the language. But then, that’s part of their story. The whole electronic experience is part of their story. It all depends. I think people always want to hear stories, and I think that’s to our advantage.