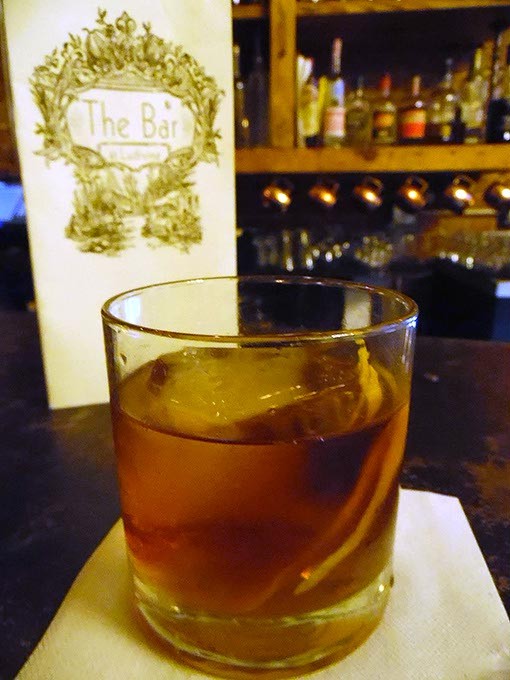 Those who love a well-made cocktail might want to set aside Sunday afternoon for the Monthly Classic Cocktail Class at Ludivine by bar manager Chris Barrett.

Barrett will delve into the history of the Old Fashioned, explain the differences between rye and whiskey and show attendees how to mix their own perfect cocktail. The class starts at 4 p.m. at Ludivine, 805 N. Hudson Ave. It’s $40 per person and is expected to last about an hour. In addition to enjoying a cocktail, there will be complimentary hors d’oeurves served nearby at The R&J Lounge and Supper Club, 320 NW 10th St., after class.

The Southern United States Trade Association took a trio of Oklahoma companies’ wares on a trip to Germany during promotions in two cities.

Southern Okie’s fruit spreads, Suan’s Scotch Bonnet jellies and preserves and Pepper Creek Farms BBQ sauce made their European appearances in Berlin and Stuttgart as part of some in-store promotions.

Oklahoma products from Griffin Foods, for more than 15 years, and Clements peanut butter, for at least five years, have been staples in Germany at certain retailers, said Oklahoma Department of Agriculture, Food and Forestry international market development coordinator Barbara Charlet.

Charlet said the ability to export internationally is important for those wanting to expand their business and gain additional sales. She said the association is working to help local companies find new income streams in international markets.

Vast chef Kurt Fleischfresser (pictured below on the left) designed a pair of menus highlighting Southern cuisine for each week’s in-store promotion and also went on the Stuttgart trip. 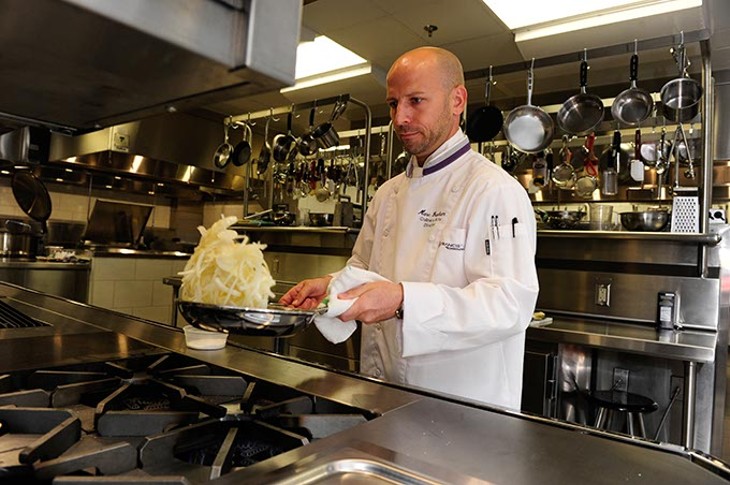 Chef Marc Dunham (pictured) recently resigned as director of Francis Tuttle Technology Center’s School of Culinary Arts, where he was instrumental in expanding the program and bringing in events like the annual Charcuterie Jam and the Guest Chef Dinner Series.

“It’s been a great five years working with the students and faculty at the Francis Tuttle School of Culinary Arts,” said Dunham. “I’m very proud of everything we’ve accomplished during my tenure there, and I know the school and its students will continue to do great things.”

Dunham is leaving the school to pursue personal interests. 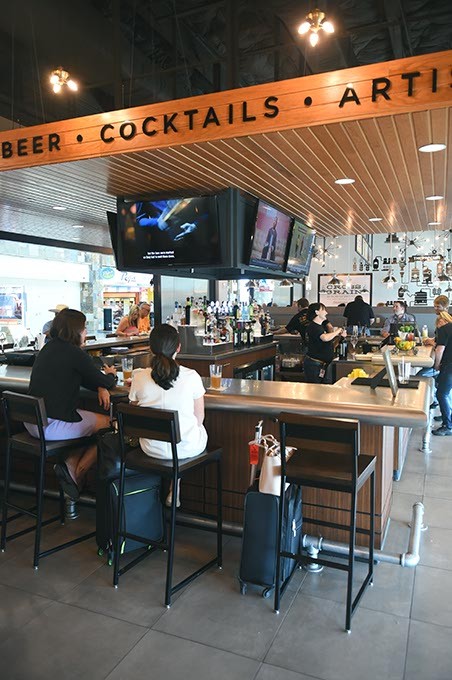 Most people at the airport are looking to get away, but the new Cross Grain Brewhouse at Will Rogers World Airport hopes to bring a local touch to pre-flight dining.

“For us, it’s a chef-driven concept with local flavors, local purveyors and local beers,” he said. “That’s how we deliver the localized experience in a branded concept.”

Schneider hopes its fresh-to-order food and artisan cocktails will inspire travelers to show up to the airport a little early. And with a menu that changes seasonally, he said there will often be something new to try at each concept. 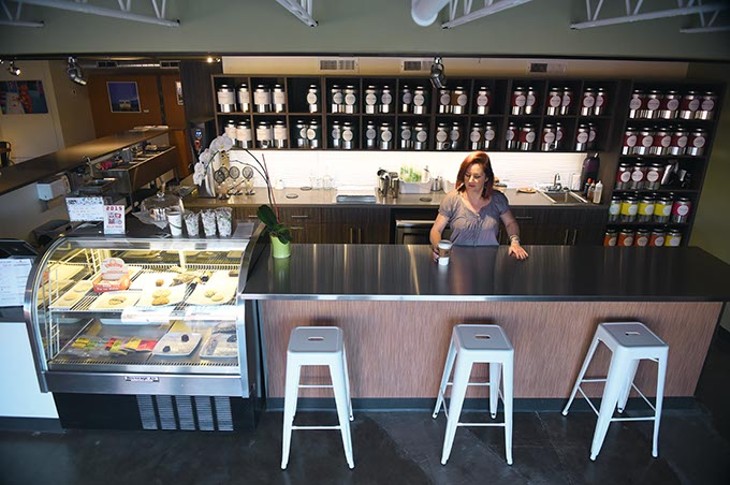 The long-awaited second location of t, an urban teahouse is now open at 519 NW 23rd St., Suite 107, on the north side of The Rise shopping center.

Owner Kristy Jennings (pictured) said she hopes the new location in one of the city’s most walkable districts will allow more people to try what t has to offer.

Jennings said t serves a variety of loose-leaf teas that are quite different from those found in the grocery store.

“We’re a lot closer to the growers, so our supply chain is shorter,” she said. “That means fresher, better tasting and better quality tea. Even compared to the tea that’s called loose-leaf in the grocery stores, you can see a visible difference and you can definitely taste it.”

The shop focuses on personal service and guiding tea novices and experts to finding the right kind of tea and the best way to prepare it.

“We do mini classes once a month on how to make really great loose-leaf tea at home, but we’re always glad to walk people through it,” Jennings said. “People get overwhelmed with our list of 100 teas, but I tell them they can set it down and if they let me pick their brain, I can help find a tea they’ll really enjoy.”

In addition to buying tea by the ounce to take home, Jennings also makes tea in-store for customers on the go. 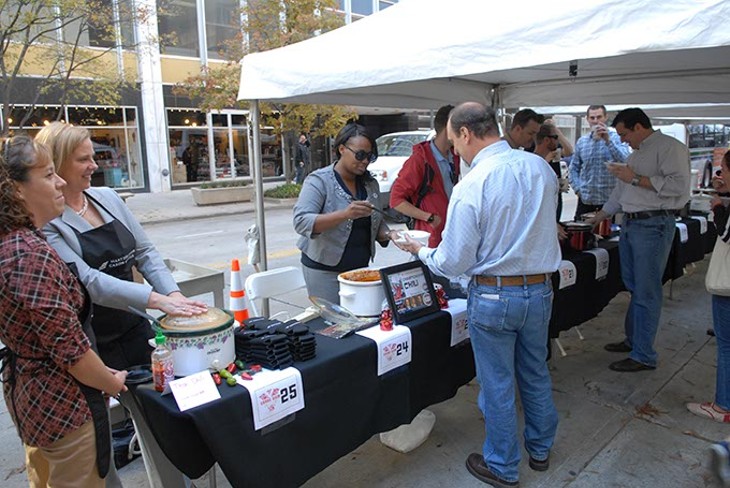 There is no safe time to schedule a chili cook-off in Oklahoma City. Summer extends halfway into fall, and then winter comes blowing in like a big, bad wolf. But VI Marketing and Branding is still bringing back its Carne Diem chili event to benefit United Way of Central Oklahoma on Friday.

Park Avenue will be closed from Broadway Avenue to Robinson Avenue for a street party with plenty of chilis as competitors face off to win the coveted Carne Cup from 11:30 a.m. to 1:30 p.m. For a $10 donation, attendees get three bowls of chili to sample from the event.

It’s the fourth year for the event to be public. In 2012, Bruce Rinehart of Rococo  took home the Carne Cup, followed by Dave “The Food Dude” Cathey in 2013 and the Range Café at Wilshire Gun in 2014. This year, at least 15 restaurants will compete for the top prize. More than 60 chilis from VI staff, vendors and others will try to win the amateur title, which comes with a cash prize.

Live music will be provided by The Wise Guys.

“We’ve raised more money each year, and 100 percent of every penny we bring in goes to United Way,” Larry McAlister, director of public relations at VI, said. “Depending on the weather, we expect up to 700 people to come through.”

It’s free to walk around the event and hang out, McAlister said, or donate $10 at the event to try some chili.