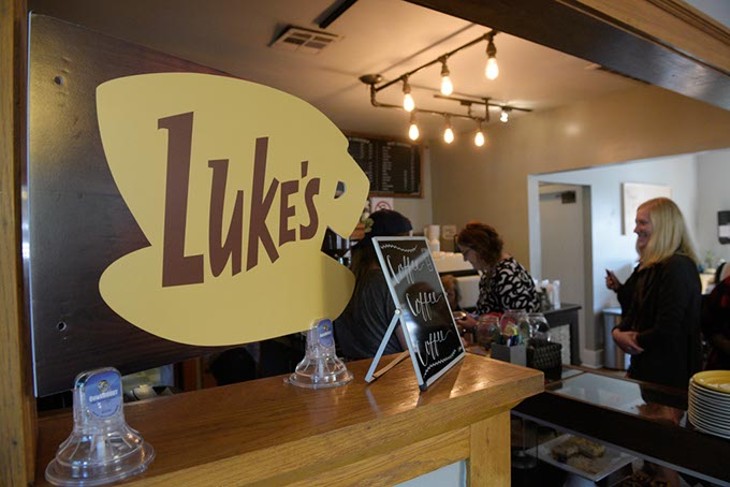 Gilmore Girls fans (and lovers of free coffee) lined up at Cuppies & Joe, 727 NW 23rd St., and The Underground, 1621 S. Douglas Blvd., in Midwest City on Oct. 5 to drink up at formerly fictional Luke’s Diner.

The shops were two of more than 200 locations across the country that were temporarily branded Luke’s Diner for the day by Netflix, which will begin streaming a four-part revival of the cult TV show on Nov. 25.

Oct. 5 was the 16th anniversary of the first episode of Gilmore Girls.

Downtown Edmond street festival Heard on Hurd puts the cap on the season 6-10 p.m. Saturday at the corner of Broadway and Hurd Street.

“Heard on Hurd is a fun way to spend a Saturday night out with family and friends to discover a new food truck or pop-up shop,” said Citizens Bank of Edmond president and CEO Jill Castilla. “Our team works hard to put on Heard on Hurd for the community, and we can’t wait to end the season with a great event this month.”

Throughout the season, 15 percent of alcohol and Heard on Hurd merchandise sales from The Patriarch Craft Beer House and Lawn, Bricktown Brewery and Tack Designs have been collected for donation to Edmond Public Schools Foundation. The total will be unveiled onstage at the event.

Named for Vilakazi Street in Soweto, South Africa, a road on which both Nelson Mandela and Bishop Desmond Tutu lived, the organization was founded by Leigh and Carrie Jacobs in 2009 to better the lives of South African children by improving their access to education, health and athletics.

Leigh Jacobs was born in South Africa and grew up in a segregated community during apartheid. When he visited his home with his wife Carrie, they wanted to find a way to give the children there the same opportunities their kids have here.

“Our kids have the benefit of electricity and a bathroom in the house, while so many families there don’t have that option,” said Carrie Jacobs. “Our daughters were lucky to be born where they are. We want that for all kids.”

This is the seventh year of Wine for Wickets, which is the foundation’s signature fundraising event. Tickets are $20 in advance or $25 at the door and include tastes of South African wines, South African food prepared by Thunder executive chef Grant Johnson, live music and a silent auction. A designated driver ticket is available for $10.

Funds raised at the event will pay for improvements to a pair of partner schools in Knysna, South Africa. If the $2,500 fundraising goal is hit, one school will receive bathrooms while the other will get to replace its ad-hoc ceiling with a new ceiling and roof.