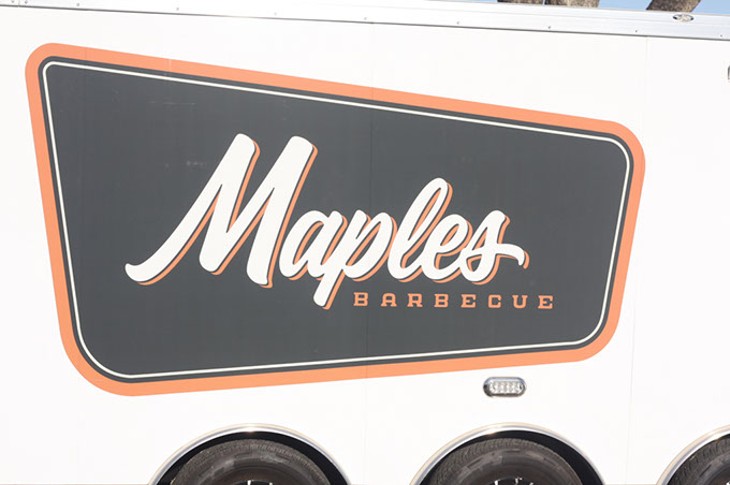 Woodruff, owner of Waffle Champion and Buttermilk Sliders food truck, modeled the new business after influential Franklin Barbecue in Austin, including its hours: 11 a.m. until sold out.

The menu is small but powerful. Brisket is made using Creekstone Farms prime grade beef, pulled pork and ribs come from Niman Ranch and Native Meat Co. supplies the sausage. A pound of brisket is $20, but diners at the soft opening made it clear it was worth every penny.

The stationary food truck doesn’t boast any shelter from the weather, but there are picnic tables out front for those who want a place to eat their lunch.

Maples opens 11 a.m. Wednesday-Sunday and closes when the food sells out. Expect a line. Visit maplesbarbecue.com.

Created by artists in residence Sarah Atlee and Randall Barnes, Embrace recreates photographs taken in the Classen Ten Penn area where graffiti has been “buffed” in quilt form.

Clark uses the exhibit as inspiration for the five-course tasting meal. The theme for his dinner is “cover crops,” which are overlooked but vital components of farming. He hopes the meal will “find beauty where others lack the vision.”

Seating is limited, and reservations are required. Tickets are $100.

Sheli Reynolds lost her husband to a brain tumor after a six-year battle with cancer. During that time, she learned about the healing power of clean eating. Monday, she opens Stone Sisters Pizza Bar, 2124 N. Broadway Ave., in his memory.

After years of doing in-home demonstrations with her sister, Tami Lake, Sheli enlisted the help of their older sister Traci Stone to create an all-organic pizza restaurant where the food tastes as good as it is healthy.

Hopefully opening (or “hopening,” as the sisters put it) Monday, the restaurant brought in chef Cally Johnson (formerly of Big Truck Tacos and J. Bruner’s at the Haunted House) to build the menu.

“Nobody has organic pizza on sprouted spelt crust,” Reynolds said. “We’re serving completely nutritious pizzas made by one of the best chefs in Oklahoma.”

The menu includes soups, salads and pizzas named for the Stone sisters’ family and history. The vegetarian pie, named for a youthful fight between Lake and Stone, is called Front Yard Rumble With a Side of Hair-Pulling.

Its super-spicy pizza is Every Man’s Dream while one covered in pasta is called Bossy Big Sister after Traci Stone.