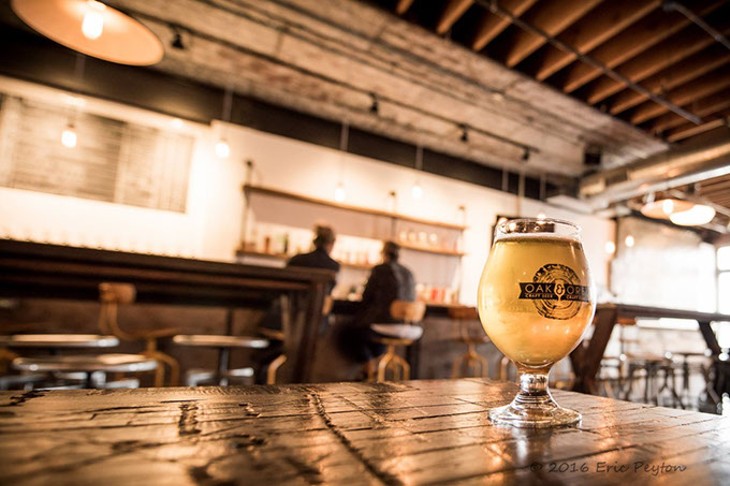 To celebrate the honor, as well as the venue’s second anniversary, owner Micah Andrews planned a week filled with activities starting Sunday.

Sunday through March 25, kids ages 12 and under can eat free from the kids menu and customers with Keep It Local cards will receive a 20 percent discount on the regular food menu.

Door prizes are drawn hourly, and those who buy an Oklahoma craft beer receive entry into a drawing for a limited-edition Oak & Ore anniversary T-shirt.

Andrews said after a successful first year, the bar and restaurant shifted focus to helping the community.

The venue hosted several events bringing together lawmakers and constituents to discuss changes to state liquor and beer laws.

Along with three other Plaza District venues, Oak & Ore started a monthly Plaza Beer Walk event to raise funds for public schools near the Plaza neighborhood. So far, the events brought in more than $1,500 for Eugene Field and Gatewood elementary schools.

“We hope to do even more with the Plaza Beer Walk this year,” said Andrews in a media release. “And for everyone wondering about the 2017 Oklahoma Craft Beer Summit, we have a big announcement coming soon.”

Nani ended in 2015 after founders and chefs Colin Stringer and Andon Whitehorn were shut down by the Oklahoma City-County Health Department, which took issue with the restaurant’s classification as a private supper club.

But wonderful things persist, which is why Whitehorn and Stringer joined Anthem Brewing Company for a new project: Beer Club.

Starting with dinners 7-9 p.m. April 3 and 4 at Anthem Brewing Company, 908 SW Fourth St., each evening includes eight-10 courses (but if you ever attended a Nani dinner, you know they’ll probably sneak in at least one extra) of beers paired with bar fare-inspired dishes.

“Colin and I have been scheming on these dinners for a good bit because it’s been a couple of years since we’ve cooked together in a ‘formal’ setting and we wanted to do that again before my wife and I left this state for Vermont this summer,” Whitehorn said. “We’ll also have Taylor McKenzie doing his thing as DJ Nowhere Sands, spinning a selection of vinyls.”

Each dinner has a scarce 24 tickets available. If they go well, Whitehorn said they will likely host more collaborations.

The dishes will be familiar, he said, but with adventurous twists.

“It’ll be more playful,” Whitehorn said. “We’re having these dinners in a taproom, for goodness’ sake.”

Beer Club dinners are 21-and-older-only events. Tickets are $75 and are available at eventbrite.com.