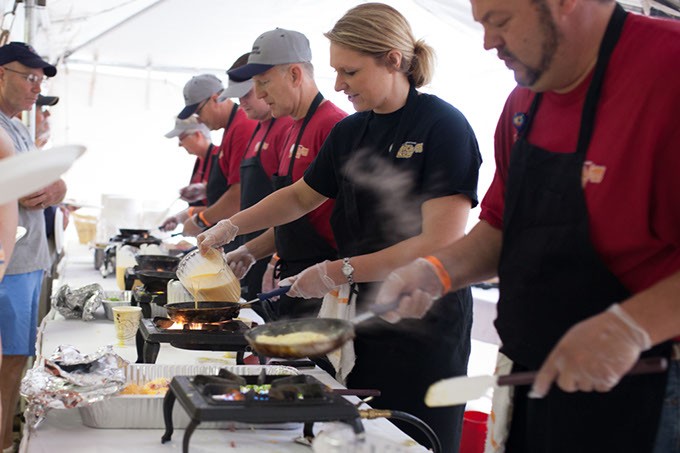 Though the eggs come from chickens this year, Oklahoma City Zoological Park and Botanical Garden will still host its annual Ostrich Egg Breakfast 8-11 a.m. May 13 at 2000 Remington Place. Along with eggs, the zoo serves a buffet of pancakes, biscuits, sausage, bacon, yogurt and Krispy Kreme doughnuts.

Smaller eggs also mean a smaller crowd. The Devon Picnic Grounds is undergoing renovations that should be finished by year’s end, so the zoo moved this year’s event inside its Canopy Restaurant. However, that didn’t change the demand for tickets. The all-you-can-eat fundraiser quickly sold all 1,000 tickets.

It’s the event’s 31st year, and it benefits animals at the zoo. If you miss the breakfast but still want to donate, Ostrich Egg Breakfast T-shirts are available at shop.zoofriends.org.

It might be surprising to some that Hideaway Pizza has never made a TV commercial. What started as a lone hometown pizzeria in Stillwater 60 years ago has grown into a pie-slinging juggernaut with shops across the state and into Arkansas. As the company looks to open its 18th location (19 if you include the original, which is still owned by the Dermer family), it moves into uncharted territory. Last year, an eatery opened in Arkansas, and plans are underway for a second out-of-state location.

“We’re in the process of doing a brand refresh,” he said. “In 60 years, we’ve never really showed off our pizza … and our people.”

The ad was filmed at the company’s Moore location, 835 SW 19th St., and begins airing in mid-May.

Presented by TapWerks Ale House, the event includes 18 in-state and 62 out-of-state breweries. It also expands to three sessions this year: 7 p.m. May 12 and 1 p.m. and 6 p.m. May 13. Tickets are $40-$50 and include unlimited one-ounce sample pours of more than 300 beer varieties. Designated driver tickets are $18 and include free nonalcoholic sodas and snacks. Visit oklahomacraftbeerfestival.com.