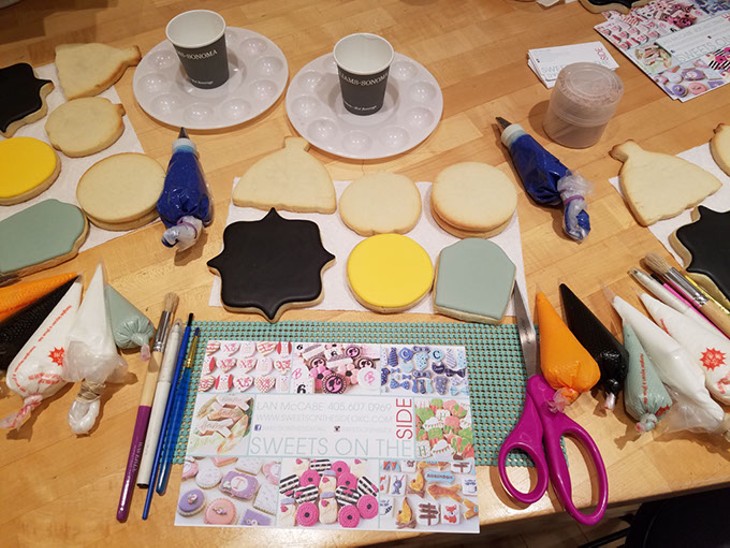 Those preparing for a visit from Saint Nick and looking to upgrade from a lump of coal to a diamond might need help making a better cookie.

“Some people just have trouble with cookies,” said Sweets on the Side owner Lan McCabe. “Sometimes they come out looking like a blob instead of a snowman.”

Though she has been baking “forever,” McCabe launched her business selling decorated cookies, cobblers and brownies business about four years ago. Earlier this year, she decided to share her expertise with others via classes at Williams-Sonoma in Penn Square Mall, 1901 Northwest Expressway, and The Black Scintilla, 1112 N. Walker Ave., Suite 104.

She said this is her first class at The Collective.

“It’s definitely a beginners class,” she said. “It’s going to be fun and relaxed. We’ll take a couple of hours and all the supplies will be there for them to decorate and some boxes to take them home.”

The class is $55 and includes cookies to decorate, snacks, “sips” of wine or a signature cocktail and McCabe’s sugar cookie dough and frosting recipes. Tickets are available at eventbrite.com. Visit sweetsonthesideokc.com.

Einar Perdomo sounded heartbroken in 2015 when he explained why he closed his Venezuelan restaurant, Amazonia Latin Flavors, in Moore.

His spirits and his restaurant are back up in Norman less than a year later.

The eatery, 584 Buchanan Ave., opened in October, and Perdomo said the results are already positive.

“The last location in Moore was super bad for us, but we really learned a lot,” he said.

There’s already more traffic to his smaller Norman store than there was at the previous location and a better appetite for Venezuelan food, he said.

Amazonia’s former Moore location updated its menu to include Mexican fare when it struggled to bring in customers last year, but Norman clientele is more interested in exploring Perdomo’s native cuisine.

The menu includes arepas (a sandwich with a thick, handmade tortilla instead of a bun) and pabellón, an entree of stewed shredded beef, plantains, black beans and rice that is considered Venezuela’s national dish.

“We will be stripping down our beer wall and serve all local beer on draft only,” he said.

“My understanding is that these are special brews just for our anniversary and this will be the only chance to try them,” Bahr said.

“I have fun stuff on there like braised beef cheek and duck pot pie,” Groth said.