The family-run truck sold $3 slices for a birthday celebration at The Bleu Garten, 301 NW 10th St.

“It’s been an incredible three years rolling around OKC, making pizza,” said director of operations Molly Hall. “People ask us all the time if it gets hot in our truck, and we like to joke that we’re not sure if a wood-fired oven in a truck in Oklahoma was a great or a silly idea. But honestly, when we think about all of the incredible people we’ve met, we know it was one of the best decisions we’ve made. We’re so thankful for all of the support these past three years and are really excited about the next year and some fun ideas we have.”

Deep Deuce is looking to strengthen its connection to its musical heritage with a weekly event called Deuce Days/Jazz Nights and a quarterly show called Legends Night.

A percentage of the proceeds from Legends Night benefit the Deep Deuce Railroad Sign & Lighting Project, which is raising funds for new signage and lighting on the bridge and underpass at EK Gaylord Boulevard and NE Second Street.

Whodunit Dinner Theater is back for another round of intrigue and intake with performances at V2 at Vast, Cattlemen’s Steakhouse and Ted’s Cafe Escondido.

The comedy/murder mystery dinner theater presents a pair of shows that run through the summer.

Victim of Retirement runs June 24 and Sept. 16 at Ted’s and August 19 at Cattlemen’s.

Tickets for the V2 show are $65 — available at eventbrite.com — and include two drink vouchers, a three-course meal and, of course, a murder.

Tickets for the other shows are $48. Visit whodunit.net or call 405-420-3222. At Cattlemen’s, the dinner is a buffet with steak, chicken, catfish, sides and a dessert. The meal at Ted’s is also a buffet featuring make-your-own fajitas, bean and cheese burritos, chips, salsa and rice. 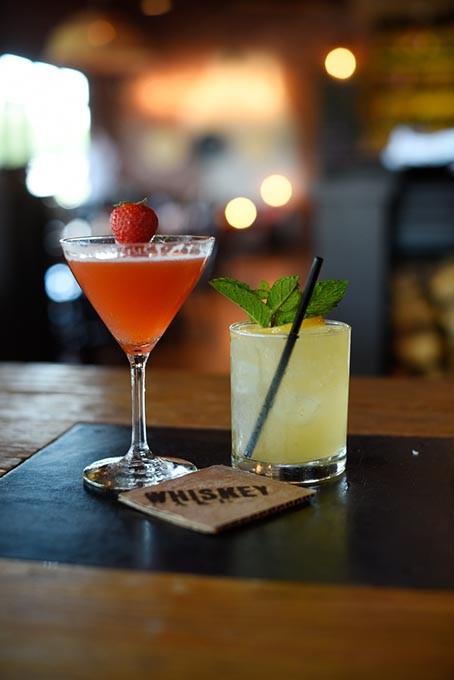 Though its food is a big part of its reputation, Whiskey Cake Kitchen & Bar, 1845 Northwest Expressway, definitely puts an emphasis on “Whiskey” and “Bar” with its new seasonal cocktail menu.

The season is very much the reason for the bevy of new beverages that focus on fresh local produce and herbs — some of which are grown at the restaurant.

The Royal Shandy ($9) embraces spring and summer with a mix of gin, honey, lemon and grapefruit bitters topped off with an imperial IPA. The light, crisp flavor strays from the heavy pine needle taste of many gin drinks.

But the real farmers market-in-a-glass drink is Sergeant Pepper ($10) with a blend of red bell pepper puree, gin, agave and lemon. The cocktails are available at Oklahoma City’s Whiskey Cake location through the summer.