The OSU-OKC Farmers Market is shutting down and being replaced by a market at Scissortail Park, a decision that surprised and upset some vendors. 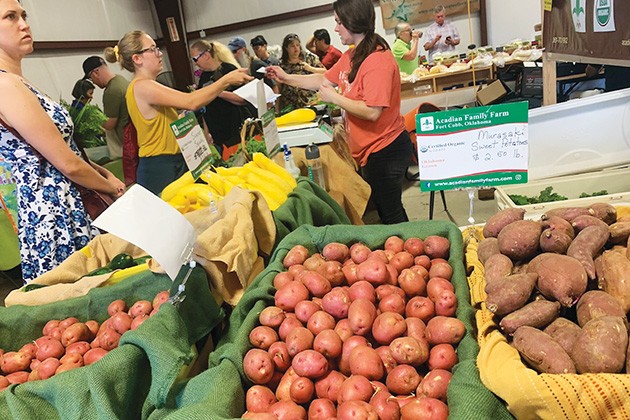 “Business has been great at that market. There are multiple generations that now shop at the market,” she said. “As far as the management of the market is concerned, we the vendors have never really had a say in anything that goes there. But we’ve been very appreciative of having the opportunity to be at that market.”

The feeling that vendors didn’t have much say or know about the market was underscored when OSU-OKC announced the market was being shut down and replaced by one at Scissortail Park. Many vendors found out about the decision from local media coverage.

In fact, Chad Ward of Ward Family Farms said vendors met with OSU-OKC president Brad Williams about six months ago and there was no mention of the market shutting down.

“It’s completely possible that the president standing there talking to us knew full well what he would’ve liked to have done,” Ward said. “Had he had that conversation with us a couple months ahead of time and even had the respect to say, ‘Hey, this isn’t working for us. We would like to find a solution,’ we could have participated in conversations about building the future of the farmers market instead of just being told, ‘We’re shutting down. There’s going to be this market at Scissortail Park, you should go there.’ … It’s not even that we’re mad that they wanted to go a different direction, but just having the respect to have a conversation with us about it instead of this absolute blow us off kind of attitude.”

Crow said they plan their production around farmers market schedules so they know just how many seeds to order and how much to produce. The sudden closure complicated things and is made worse by the fact that the OSU-OKC market officially closes at the end of February, but the Scissortail market won’t begin until April, leaving a one-month gap for vendors. Additionally, OSU-OKC market vendors are used to a year-round market, but the new market will only be open for 6-8 months.

“We have enough things planted and producing that we counted on that market being open year-round, so now with it closing at the end of February, we have one whole month where we don’t have a place to go,” Crow said. “However, the Oklahoma City Farmers  Public Market has an indoor market that is open year-round, so we started going there on Saturdays as well as continuing to go to OSU so we can inform the customers of the changes that are coming. The university has done nothing to help out with that.”

Crow said vendors have felt for a long time that they would eventually be kicked out.

“Every time a new president took the position, we all were wondering, ‘What now? What’s going to happen?’” she said. “So the suddenness of it was shocking. The fact that they threw us out was not shocking. … The most disturbing part of all of this was the complete and utter lack of respect towards people that have dedicated 20 to 30 years to that market. We’re all adults. We could have had an adult conversation, and this could have taken place a year ago because this didn’t happen overnight.”

Nick Trougakos, senior director of marketing and communications at OSU-OKC, said the decision was made after seeing the success of Scissortail Park’s Fall Market, which took place each Saturday during October. Along with that, he said the administration wanted to be able to use the building where the OSU-OKC Farmers Market was housed to benefit their other rapidly growing programs.

“The building … is tied up year-round because we’ve allowed our vendors to leave all their tables and booths and everything in there year-round, even when the market’s not happening, so we’ve lost access to that building,” he said. “The interesting thing about that building is that it’s our only multi-purpose on-campus venue that we have indoor, and we have seen in the last year really rapid growth in our public safety programs — our police science program, our fire protection program and our paramedicine program. And they are all desperately in need of indoor training space. … We’ve been getting in a bind with trying to provide the best academic experience for our students, and a natural solution for us was to be able to use that building.”

Trougakos said vendors were not told ahead of time because they wanted to handle the announcement in a “positive and exciting way.”

“Out of respect for the folks at Scissortail, we wanted to make sure that when the decision to move and the announcement was made that we could structure that announcement in a really positive way,” he said. “We just wanted to make sure that we could have Scissortail be at the forefront of our thought process … to build for what we think is going to be a really exciting thing for Oklahoma City.”

Maureen Heffernan, Scissortail Park Foundation CEO and president, said the vision for the park was to eventually develop a farmers market. She said she received a call late last year from the OSU-OKC team, who told her they felt they needed to shut down the market but wanted to find an alternative for their vendors. Officials say roughly 15 vendors from OSU-OKC, which averaged 30-40 vendors, have already signed up for space.

Heffernan said they will work with vendors to develop the market into a fun destination.

“In addition to the various vendors, we want to have some food people can buy, our cafe will be open in April. We’ll have some entertainers, hopefully live music at most of them. We’d love to invite chefs or others to come down and once in a while put on a food demonstration using what’s in season,” she said. “Our vision is just to make it a fun, relaxing experience on a Saturday that people downtown would come to and people would drive to.”

Crow and Ward have already been working with Lance Swearengin, Scissortail’s director of horticulture and grounds. They both said they plan to participate at Scissortail’s market but will have to have a presence at others to make enough profits. They also both commended Swearengin’s willingness to work with them and find solutions to many of their concerns while helping with the transition.

To address concerns about having to park far from the market, Heffernan said they will have staff and/or volunteers ready to assist people in taking things to their cars.

Staff is also looking at ways to extend the market as much as possible. Heffernan said they will try to extend it into December if the weather cooperates. She said this could be done with a tent or heaters in the park’s pavilion. She also said once Union Station is renovated, which she suspects could be in the next five years, it could become the location for a year-round market.

The Scissortail market will be at the northeast corner of the park, adjacent to the stage. The first day for the market is April 4.