Dinner With Love organizes a massive effort to provide fully cooked holiday meals as a way to bring families in need together. 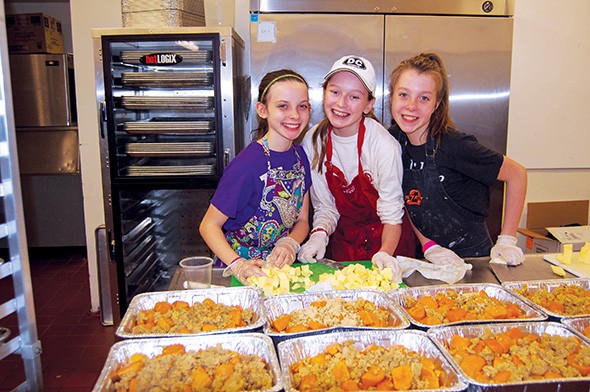 Ten years ago, Bob Rogers traversed Oklahoma’s chilly December weather while a freshly prepared and boxed-up holiday meal warmed his backseat. Rogers was on his very first delivery run for Dinner With Love and would soon arrive to the home of a family he’d never met, but he knew they could use a little goodwill. Rogers was a natural fit for the charity program that recruits an army of volunteers to prepare fully cooked meals to families of up to 10 people that are then delivered across the metro just in time for Christmas. Being well-aware of what a bare-bones Christmas can feel like to a child, Rogers signed up as a delivery driver.

“When I was growing up, due to our financial situation, Christmas was not a big deal at our house,” Rogers said, adding that he now makes an annual tradition of bringing his entire clan of family and friends together for two huge Christmas meals. “It’s probably an overreaction on my part.”

Before that night, Rogers hadn’t been exposed to the poorer parts of Oklahoma City or its residents. He said he didn’t know what to expect. When he arrived to the appointed house, he met a family that would quickly become his lifelong friends.

“The mother works every hour she possibly can, and her little girls are neat as a pin, really well-adjusted,” Rogers said. “Those girls are headed for bigger and better things. One of them has her goals set on going to college and being a physical therapist, and that’s something she might not have even known was available to her. Just through us talking, we all got a little different perspective.”

A story from another driver that Rogers said always chokes him up is when a family was down to a bottle of ketchup in the fridge, which they were going to use to make tomato soup.

“When the mother saw that box, she burst out in tears and hugged the lady who’d taken it to her,” Rogers said. “She said, ‘I can’t believe there is someone out there who cares.’”

He went on to talk about their work following the 2013 tornado disaster in Moore and a woman who had lost her job and her house to the storm. Her marriage collapsed soon after, so she was left alone to raise the children. Rogers said that the meal wasn’t just for nourishment, but also an affirmation that these families have a support structure within the community to help in trying times. 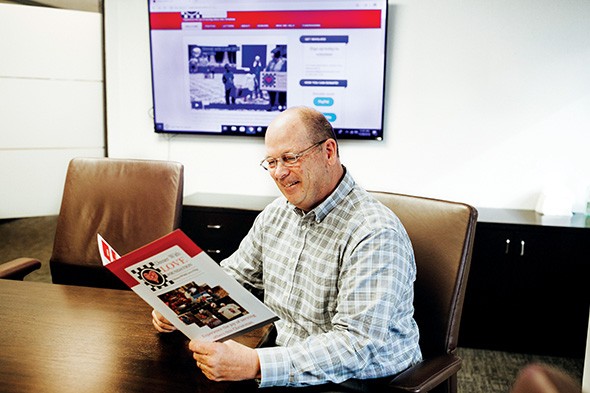 After delivering that first meal a decade ago, Rogers volunteered to be on the board to help coordinate with 47 different agencies throughout the metro to identify families in need. It’s a massive task that has grown from its inception 11 years ago when 100 meals were prepared that would feed 1,000 people to this year’s goal of around 900 meals to feed upward of 9,000 people. Since Dinner With Love began, the program has fed a small city’s population, 36,000 people, and is looking to expand its reach.

Paul Ravencraft named the organization after his mother, whose middle name is Love. The program’s inspiration came from his mother’s dedication to ambitious holiday meals to unify the community. Paul’s family was also well-versed in food preparation after running two restaurants in Clinton, so the event was a natural fit.

“She always provided Christmas and holiday meals which brought the family together,” Ravencraft said. “It meant so much to us that she’d go out of her way, so with Dinner With Love, we don’t skimp. Each family has a meal you or I would have that includes a 10-pound honey-glazed ham, vegetables, potatoes, bread, homemade pie, rolls. We also provide family with a Bible, hard candy, fruit.”

The meals are prepared at two different sites, starting Dec. 21 at Westminster Presbyterian Church at 4400 N. Shartel Ave. and then Dec. 22 at St. Luke’s United Methodist Church at 222 NW 15th St. It takes over 30 volunteers in the kitchen and roughly 800 drivers to fulfill the orders every year. One of the challenges of an endeavor of this scale is finding health code-approved commercial kitchens able to handle this massive volume. Paul said they’ve reached capacity with their existing facilities but are looking at options to bring in more churches to help grow the program. 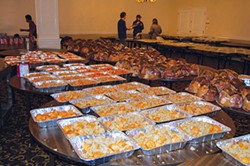 The food is important, but so is the connection that drivers can develop with the families they meet.

“We’ve put an emphasis on more personal interaction, encouraging drivers to take few minutes to meet the people they are delivering to,” Rogers said, adding another story of a delivery. “This family we delivered to had six people in a one-bedroom apartment. Three little boys came up and introduced themselves to the driver. One said, ‘Look, Mom! An apple!’ He got that excited by an apple. I mean, good gosh. Have you ever been that excited by an apple? Not me.”

The last 10 years with Dinner With Love have given Rogers a deep appreciation of the binding power of a holiday meal within a family. His own holiday meal will be broken up into two days and will draw roughly 40 people to his house. It’s not quite as massive as 9,000, but it’s still quite an undertaking, one that Rogers said is worth it to see everyone together.

“I just sit back and love it,” Rogers said.