Then it seemed like new ones arrived weekly. Some, like Heo’s Kitchen, came and went, while others became scene staples.

Once a novelty, food trucks are now simply another option in OKC’s ever-expanding question of where to eat next. While longtime favorites remain, there are several new ones on the scene waiting to become your next culinary obsession.

“Kayla had owned a restaurant before and was talking about opening another one,” Galvez said. “I asked, ‘Have you thought about doing a food truck?’”

About a year later, Nguyen called him up to say she’d bought a truck. After a few months of work to convert it from a barbecue truck to one with more of a kitchen, Yum Yum Bites opened in August 2015.

The food — grilled chicken skewers and Vietnamese sausages served on sugarcane sticks — relies heavily on Nguyen’s background in Vietnamese cooking. Despite Oklahoma City’s large Vietnamese population, Galvez said he thinks Yum Yum Bites is the only truck of its kind in the metro.

Business is going so well that it is now a full-time venture for both owners. A steady stream of private events and street festivals in Edmond and Norman keeps them busy. This year, the truck is serving at Oklahoma City Festival of the Arts, which is Tuesday through April 30 at downtown’s Bicentennial Park, 500 Couch Drive.

Richard Glitsch and Ann Ogorek are stuck with Donkey Poo.

“We have enough Donkey Poo fans that we pretty much have to carry it,” said Glitsch, Blue Donkey Cafe co-owner.

Poo is a blend of avocados, cucumbers, cherry tomatoes, diced onions and citrus juice — a much tastier combination than the name suggests. Glitsch said the humorous moniker keeps customers interested.

“We get so much fun out of it. Anybody new who sees it, it definitely puts a smile on their face,” he said.

Ogorek learned to cook Guatemalan cuisine from a Guatemalan citizen years ago. She said the fare isn’t fancy, but it sure tastes good.

“Our business plan is just to do those four things the best we can every time out,” Glitsch said.

The menu is gluten-free, including the tacos, which are served in a puffy shell. They mix serrano peppers, which is traditionally Guatemalan and provides a short burst of intense heat, into the ground beef.

Unfortunately, someone loved Chosen Juan a little too much, Almaguer said.

Instead of letting it slow him down, Almaguer paid off the old trailer and bought a new, improved food truck that he will launch in a few weeks.

“We put a full kitchen in this one; we rebuilt it from the ground up,” he said.

In addition to burgers, The Chosen Juan will serve Asian-Mexican fusion dishes, including sushi tacos. 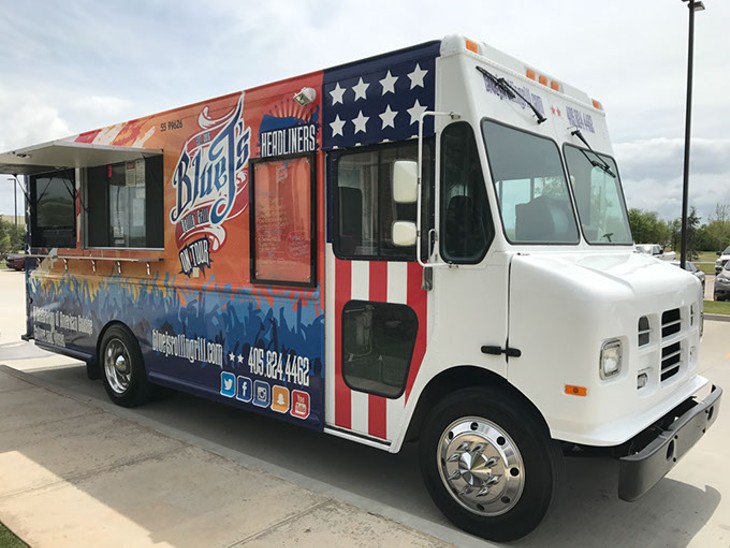 Josh and Michelle Spurlock love two things: music and food. So when they began looking for a new business opportunity, they combined the two.

“Our foods are gourmet burgers, mac and cheese and other comfort foods,” Michelle said. “But our truck is also about music and entertainment.”

In addition to fresh fare, BlueJ’s is decked out with a 48-inch TV hooked up to a satellite dish, a Bluetooth soundbar to crank up tunes and even karaoke equipment to let guests get in on the fun.

“One of the things we try to do is work with different types of people in those industries,” she said. “We help promote them and their music events. Now we’re starting to work with people in the film industry.”

But the real draw is their menu, Michelle said. In addition to craft burgers, the truck is one of the few places in Oklahoma City where diners can get Cincinnati-style chili. A thinner chili, it’s made with Mediterranean spices that set it apart from other versions, and it’s served over macaroni and cheese.

It might be a business, but the Spurlocks hope it can be a help to families, too.

“We both had really strong relationships with our grandparents. We learned a lot about sharing time together through food,” Michelle said. “The truck can be a place for family meals. A food truck can bring people together.”

Back in Oklahoma, they noticed a lot of mobile eateries opening up and thought they could get in on the game by introducing those delectable little doughnuts to the Sooner State.

“There was nothing like it around here,” Pelter said. “Now we’re starting to see a lot of repeat business and people who seek us out. We call them Mini Maniacs because they’re obsessed with the doughnuts.”

With a machine on the truck, Metro Minis sells gourmet doughnuts that are made fresh when customers order them.

“They melt in your mouth,” Pelter said. “We say they’re life-changing doughnuts. I can’t even eat other doughnuts anymore.”

Cseh makes the toppings from scratch daily, adding to the allure. Varieties include cake doughnuts covered in vanilla glaze and blackberry puree, dredged in cinnamon and sugar and topped with sweetened condensed milk and pecans.