Entering its fourth season, Foodie Foot Tours expands in OKC and into Tulsa.

March 29, 2018
comment
When Nadia Jubran traveled to Oklahoma City from upstate New York to visit a friend, they signed up for the Foodie Foot Tour, a bimonthly guided tour through different OKC neighborhoods that combines history, food and libations.
“When I thought Oklahoma, I wasn’t thinking I would I have the best culinary experience, but the tour showed me otherwise,” Jubran said. “I got to learn about the culinary scene and unique history of the area.”
Four years after Ashley Stevenson started Foodie Foot Tours as a hobby to shine some light on the Deep Deuce and Automobile Alley neighborhoods, the new season of tours begins March 31 in OKC and, for the first time, Tulsa.
Jubran will lead tours, which work in conjunction with restaurants, breweries and bars to provide the cost of food, drinks and gratuity in one $65 ticket. After her trip to OKC, Jubran relocated to Tulsa for work, and she said she was shocked to find Tulsa didn’t have a similar food tour.
“Tulsa has a hip, artsy feel, so I thought it would be a perfect fit,” Jubran said. “[The OKC trip] definitely did help where otherwise, I may have never considered [moving to Oklahoma].”
The Tulsa tour will visit Sisserou’s a Taste of the Caribbean, Laffa Medi-Eastern Restaurant & Bar and Glacier confectionary. Also starting March 31 are two Oklahoma City tours. The Deep Deuce tour works with The Wedge Pizzeria, Belle Kitchen, Urban Johnnie, Parks Bar & Grill and Stag Lounge.
The Automobile Alley tour will visit Twisted Spike Brewing Co., Nashbird and Waters Edge Winery, with the possibility of another restaurant being added soon, said Stevenson.
A cocktail-themed Uptown 23rd District tour with The Pump Bar and Bunker Club will be up and running in April.
Stevenson started the tours in 2015, building off her hobby of blogging about food in the city. She was first attracted to the Deep Deuce neighborhood.

“It seemed like Deep Deuce didn’t have the same organization as some of the other neighborhoods,” Stevenson said, noting that the area’s combination of history and burgeoning restaurants was the perfect way to educate while entertaining.

Ashley Stevenson walks off love for culture and eats with Foodie Foot Tours
Transformative moments occur when our understanding of the world runs up against a different culture or experience and we are open enough to allow the new thing to change us.
By Greg Horton
Food Features
“It’s about 50-50 between eating and history,” she said. “We try to give them as much history as possible, but when you factor in the food and drinking, we can’t get it all in.”
Tours last two to three hours, depending on the size of the group. Guests get to try three to four plates of savory options. At confectionary eateries like Belle Kitchen, they try one sweet, and at a bar, they stay for one to two drinks.
Michelle Brock, who publishes the Oklahoma City edition of the nationally syndicated Travelhost magazine, leads tours in Deep Deuce and Automobile Alley. Stevenson relocated to Austin to be with her boyfriend but returns to Oklahoma City at least once a month to check in on tours.
Brock and Stevenson met through a certified tourism ambassador program, and Stevenson advertised with Travelhost. She asked Brock if she knew anyone who could help lead a tour.
“‘It sounds like a blast,’” Brock remembered saying. “I loved the tour that I went on, and I know a lot about the city. Being involved and knowing the history helps me with my business.”
Deep Deuce was Oklahoma City’s largest black neighborhood in the 1940s and ’50s and was a home to many firsts for the city.
“We talk about the African-American and jazz history there,” Brock said. “Martin Luther King applied at Calvary, which surprises a lot of people. … It had the first African-American newspaper and medical clinic. There is a lot of history in a few blocks that a lot of people don’t know about, so it’s pretty exciting to lead.”
In an area that was once the center for African-American commerce in the city, Parks Bar & Grill, which was added to the tour last year, is one of the few black-owned businesses in the area today.
“My favorite part is hearing where people came from and how they found out about it and their likes and dislikes,” Brock said. “Most of the time, it is strangers that are fellowshipping over food and drinks and put in a position to be with people they wouldn’t have been with before. Getting people from different backgrounds together over food is a beautiful thing to watch.” 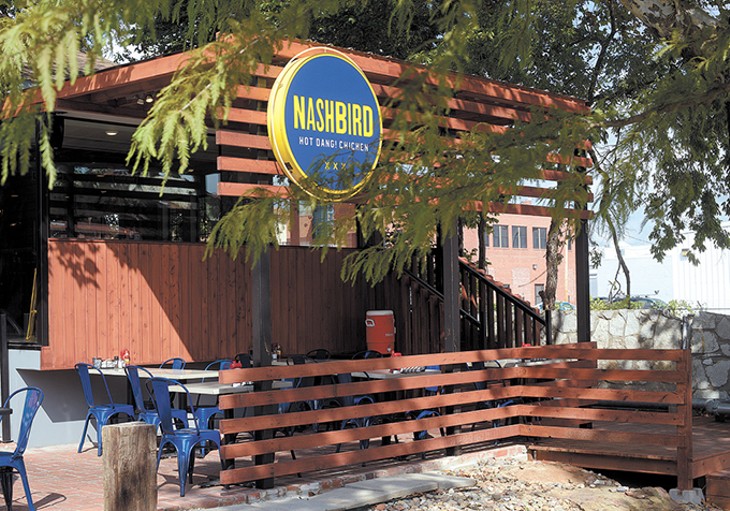 Tours will be held every other week into November. As the season continues, Brock said Foodie Foot Tours will announce final details on an Uptown 23rd Street cocktail tour and potentially one in the Stockyards, as well.
The Automobile Alley tour features two new stops with Twisted Spike Brewing Co. and Nashbird.
“There is a lot of new food for people that might have been previously that had fun and want to come back,” Brock said.
It is quite the expansion for Stevenson, who manages the back end and procession for Foodie Foot Tours.
“It started just as something fun to do, a hobby,” Stevenson said. “I wanted to have fun, and if people didn’t like it, I was still going to do it for me. The fact people liked it enough that they wanted it in another city is amazing.”
Visit foodiefoottours.com.