“We do experimental, outside-of-the-box stuff. That’s where we want to be,” IAO board president David Smith said.

David Smith sits at the folding table placed in the room’s center. The sound of his rubber-capped chair legs scudding over the stained concrete floor echoes hollowly in the industrial-style space with exposed brick walls and overhead pipe.

“I’m going to fold paper while we do this. I hope that’s OK. You’ll have a pretty flower by the time we’re done,” Smith said.

He slides a cellophane sleeve of roughly 6-by-6-inch brightly colored paper squares within easy reach, selects a sheet of cobalt blue and begins to fold.

Suzanne Thomas, a Rose State College art professor and IAO visual arts committee chairwoman, sits next to him. She nods and laughs with a shrug that says, “Whatever makes you happy.” 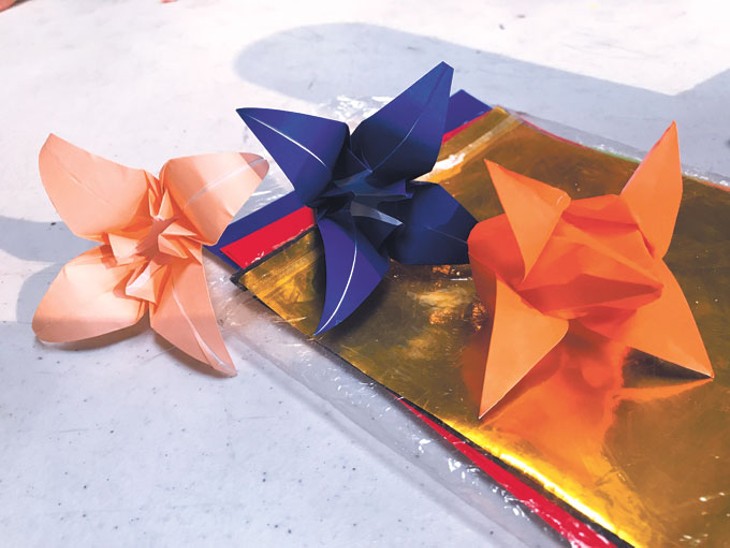 Smith, known as spontaneous bob since his college days, is merely doing what spontaneous bob does. He creates things, and he got his artistic start with Individual Artists of Oklahoma (IAO). He is also its current board president.

IAO supports and creates opportunities for Oklahoma’s creative minds, according to its mission statement, but the organization is much more. It’s a place for mentorship, encouragement and fostering new and emerging forms of artistic expression.

“We do experimental, outside-of-the-box stuff. That’s where we want to be,” Smith said.

He is inspired by the late James “Frank” Parman, a poet and playwright who was one of three people who founded IAO in 1979. Parman published books, produced plays, edited anthologies, conducted workshops, was a visual artist and co-founded two other arts organizations.

“Frank was a poet, architect, mad genius,” Smith said. “A lot of it was literary related, and playwrights came in.”

IAO’s first space was a shared one in The Paseo Arts District, and that space lent itself to an inclusion of the visual arts to complement the spoken.

Smith became involved with IAO at age 14. He wrote and enjoyed poetry, so he and a friend would attend IAO-hosted readings. Within three years, he had a show there — sort of.

“My first pseudo show … I had a big station wagon, and I put every piece of art I ever made in it, and I drove around and I went to IAO,” he said. “Kevin Stark was having an opening, and his band (Blue Room) was playing in the back. This was before he went to California and made Ninja Turtles,” he said.

Stark is known for designing toys, being the curator of the Toy and Action Figure Museum in Pauls Valley and running his gallery and studio, where he mentors up-and-coming artists.

Dana McBride, IAO director at the time, encouraged Smith to lean his paintings in the hall outside Stark’s exhibit.

“Actually, when we think about that, if I may, that’s a pop-up show,” Thomas said excitedly. “You had the first pop-up show.”

Thomas said that is what IAO is about — getting back to the spontaneity of artistic expression.

“He’s still Kevin Stark, and he still has no idea who I am,” Smith said.

They laughed, but a later phone call confirmed that Stark remembers that opening and said IAO was one of the first places to give him a show.

“They supported me by saying, ‘Your stuff is valuable,’ and gave me a place to show it,” Stark said.

He also remembers the high school kid’s work leaning up against the hallway walls.

“I was fine with it,” he said. “I’m always trying to support people in their art.”

Nowadays, Stark sticks to his Pauls Valley gallery, but his mission shows parallels to that of IAO. He mentors artists through their first shows, which he calls a “stepping stone to doing a real show.” He helps them with developing, hanging, pricing and selling — all without taking a commission.

“I know how poor artists are and how hard it can be,” he said. “I think that IAO has an important role to play in the local art scene, supporting artists that normally may not get a show.” 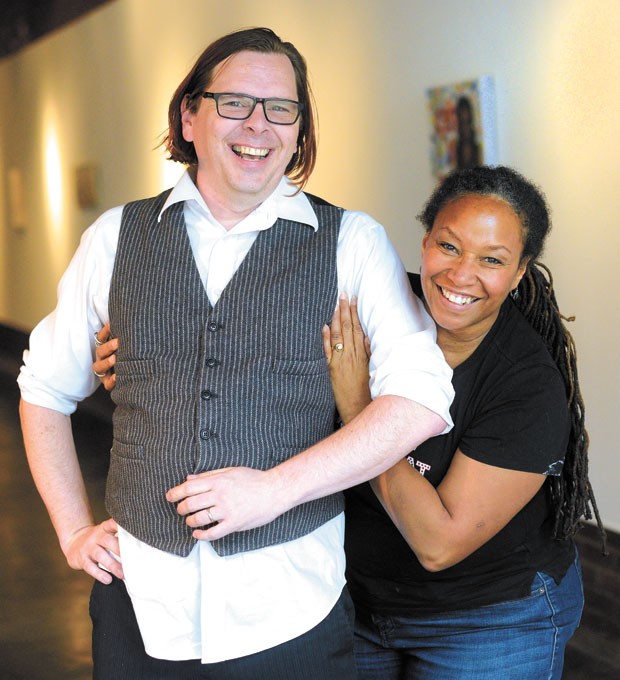 That’s IAO’s mission — supporting artists and art that don’t necessarily fit the conventional or mainstream concept of what art is supposed to be.

This philosophy doesn’t just apply to working artists. IAO volunteers to introduce art to underserved children in the community.

“One of the things that we do here is Positive Tomorrows, a local elementary school that serves only homeless children,” Smith said.

“They have after-school programs where they go to the ballet one day, they go here and there, and they come hang out with Mr. Bob and we do art projects here in the gallery — anything from painting to printmaking to origami. They come here once a week, and we just make art with these amazing, amazing kids. And that is probably my favorite thing we do here.”

Another one of Smith’s favorites is the poetry readings IAO hosts at the gallery and sponsors at Full Circle Bookstore, 1900 Northwest Expressway.

“At the end of the day, when I’ve gotten up here at the butt crack of dawn and set up chairs and the sound system and a bar and turned on the lights and done 20 Facebook posts to announce the poetry reading and people are here … sometimes it can be something simple,” he said. “Just to see a young artist grow, to see an emerging artist realize, ‘Hey, I’m an artist,’ is amazing.”

In Smith’s hand is a small, bright-red origami Star Wars X-Wing fighter. He sets it down alongside three neatly folded bright paper flowers.

IAO curates an average of six shows a year, hosts group shows and holds two fundraisers to support the programs it offers for free to the public.

Print headline: Artistic mission; For decades, Individual Artists of Oklahoma has been cultivating artists in OKC.