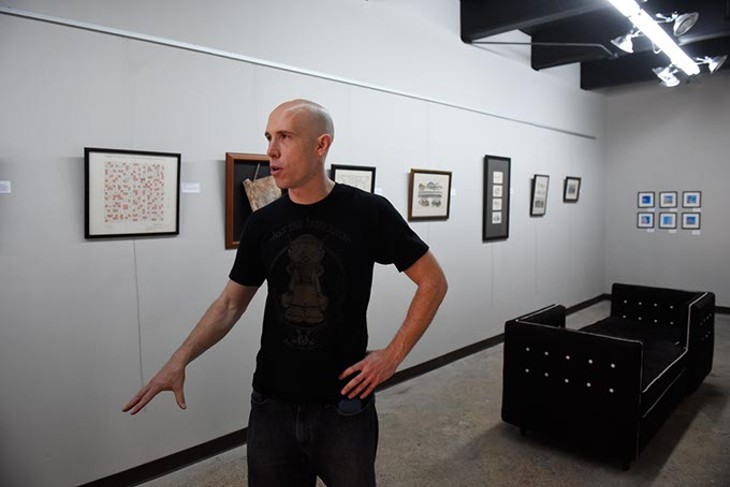 Charles Martin led a tour through the work-in-process innards of The Paseo Plunge, which opened in 1933 as Oklahoma’s first community pool.

Martin manages the 28,000-square-foot building, located at 3010 Paseo Drive. He’s on a long list of people excited about the building’s potential in the neighborhood, and seeing the cavernous layers of space unavailable to the public at this time makes it easy to see why.

The tenant walked down a dark, concrete hall guided only by the light of an iPhone. He said as much time as he spends here, he still finds unexplainable surprises all the time in the building that once sat unused for more than 30 years.

Martin pointed to a wall with the graffiti-emblazoned words “HELLO HOTDOG.” In one room, he found an enormous devil costume. He can’t explain any of it, but random surprises like that have endeared the place to him.

“Whenever I have a moment, I always try to go through the building and through all those little corners, take a picture, put it on Instagram and create a little false story about where it came from,” he said. “There’s just so many little treasures around this place.”

Only a fraction of Plunge’s vast space is open to the public at this time, separated from the rest of the venue by a temporary wall. Three temporary rooms have been developed and will transform as the project progresses. The building also provides studio space for local visual artists like Rick Sinnett and George Oswalt.

The short-term goal, Martin explained, is to introduce the public to the project now so they can watch it evolve.

“A lot of projects like this, the owner fills up the building and the public outside just has to wait until the whole thing is finished,” he said. “Then there’s a grand reveal.”

One of those temporary spaces houses Transient Gallery, in which each month, a local artist runs a storefront before it rotates to another artist. It is open through at least September.

“They can hang their art, they can have the doors open as much as they want and they’re able to sell to the public,” Martin said.

Plunge’s main Exchange Gallery now occupies the venue’s largest space. A series of guest-curated shows and traveling exhibits showcase a variety of art typically on display one to two months. Martin said the intent is to ensure guests always have new and fresh things to see at Plunge as it continues to grow.

Then there’s a tiny nook near the main entrance. It holds Martin’s Literati Press Bookshop, which is curated by local writers and will expand as renovations continue.

He said he also hopes a coffee shop will eventually move in on the first floor. However, he’s wary of setting firm timetables as owners and occupants juggle major renovations, zoning ordinances and other legal requirements.

The good thing, Martin said, is there is time to get it all done right.

“I’m used to working on very small levels, so whenever I decide to do something, it’s just execute,” he said. “This is a chance where I’m like, ‘OK; patience is an incredible virtue right now.’”

It is impossible to talk about Plunge’s history without discussing John Belt, the attorney who dedicated his life to revitalizing the bohemian arts district. Belt purchased nearly every building on Paseo Drive, his last and biggest purchase being Plunge.

Belt labored to acquire the structure even as it sat unused. Its former owner was ill, and property rights were tied up in his estate.

In 2009, Belt finally closed on the last piece to the Paseo puzzle. His vision was to transform the venue into a multidisciplinary art space and district hub. His wife, Joy Reed Belt, picked up where her husband left off after his 2013 death from cancer.

“[Plunge] has a lot of potential, and it’s the biggest structure on Paseo,” she said. “We have a goal, and we’re moving very slowly toward it.”

Joy Belt described the structure as compelling but eccentric. Its almost entirely concrete frame does not make for easy renovations.

She enlisted Martin’s management help after he became entranced with the couple’s dream for the space. Earlier, Martin, who already knew of the Belts’ grand vision for the building, shot a short film and hosted an artist talk in the building. He immediately fell in love with it and wanted to see those goals come to fruition.

“[John Belt] saw it as a very long-term investment but something that would eventually build a vibrant community,” Martin said.

“We have some artists in there now on a temporary basis, pop-up galleries and things,” she said. “That seems to be something that’s very needed in the community, and we certainly have infinitely more inquiries than we can handle.”

Plunge will be an important piece in efforts to transform Paseo Arts District from an area that comes alive each First Friday Gallery Art Walk into a district that always buzzes with activity.

Martin said foot traffic throughout the district should increase once a facility like this is complete.

“We’re trying to make it into a place where you just come,” he said. “It’s always a happening place.”

Martin is thankful the building’s owner is dedicated to enriching the community. In the long run, he said, Plunge will offer the area much more than additional cash flow.

“You could sell this whole thing to Red Robin or a restaurant chain and make life so much simpler,” he said. “Instead of doing that, we’re trying to build something significant that’s going to help enrich the Paseo community for the sake of this legacy that we’re lucky enough to be involved in.”

Print headline: Dive in, The Paseo Plunge makes a splash as it transforms from a disused community pool into a creative oasis.