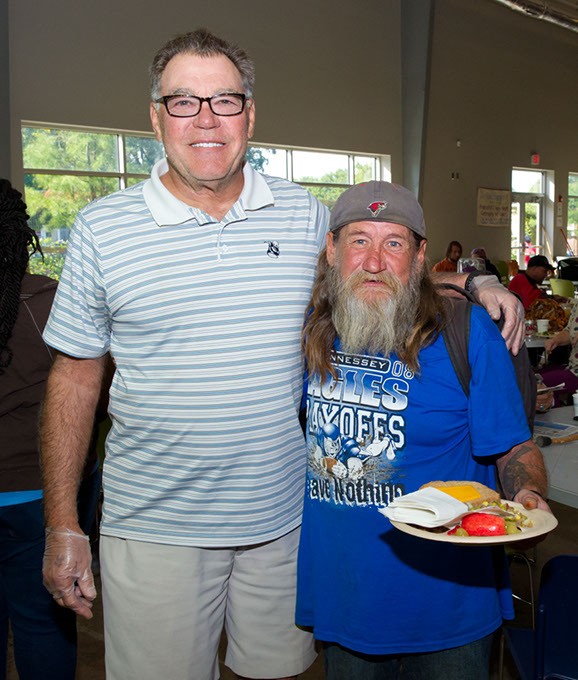 Ask Steve Zabel about one of his fondest memory in football. Go on. Ask him.

Despite a successful career with college football and in the NFL, it wasn’t until about 14 years after he quit playing football altogether that he found his life’s work. And even then, it was only because he had a friend holding him to his New Year’s resolution.

Zabel told Sooner teammate and buddy Larry Bross at a Christmas party that his resolution was to serve breakfast. That was all. Then he got a call from Bross on the last day of 1992 asking him if he knew what the next day was. Bross told Zabel that he would see him bright and early at the church, and that was that.

For the next couple of weeks, Zabel woke up every day around 4 a.m. and showed up at the church to serve breakfast to the homeless in Oklahoma City. Three years later, Zabel and Bross established City Care, a nonprofit organization devoted to providing for the homeless and hungry.

Over the last two decades, City Care has grown into a vehicle for helping people. Broadly, the outfit provides the necessaries for the city’s homeless.

Specifically, the organization helps finds housing for low-income families and helps tutor and teach children how to function, how to thrive.

City Care’s Whiz Kids tutoring program served nearly 750 children during the 2012-13 academic year. Thanks to City Care, more than 1,000 volunteers and 60 metro churches have come together to help children in the Whiz Kids program flourish.

And to think all that started with a couple former Sooner football players who wanted to make good. Now ask Zabel, who is now 66 years old, about one of his fondest memories in life. Go on. Ask him.

“That first morning at the church, when I cracked and cooked 36 dozen eggs and we fed about 200 people, and I just thought that that was an unbelievable opportunity,” Zabel will answer. “That’s a fond memory.”

Then, Zabel rounds back to those early football memories, the ones he felt set the pace for his career and his mindset. “It would have for sure had to have been catching the winning touchdown pass against Kansas in Norman in 1967,” Zabel answered.

That was a game the Sooners had to win. They were ranked seventh in the nation with their only loss against Texas in a state fair affair that saw the University of Oklahoma on the wrong side of a 7-9 score. OU bounced back though, molly-whopping its next four opponents with a combined total of 128-21 points in Chuck Fairbanks’ first year as the head man in Norman. The Jayhawks weren’t terribly good that year, but they were doing a fine job of scaring the national title contenders that Saturday.

They were leading the Sooners 10-7 heading into final minutes of the game when Zabel found himself on the business end of a 30-yard pass from quarterback Bobby Warmack that went for six.

OU finished out the season undefeated and untied in Big 8 Conference play to win the league title. That earned the Sooners a berth to the Miami Orange Bowl to take on No. 2-ranked Tennessee. As fate — and offensive coordinator Barry Switzer — would have it, Zabel caught another memorable touchdown pass in the Sooners’ 26-24 win against the Volunteers.

“When I caught the pass, about 100,000 oranges came flying out on the field from every direction,” Zabel said. “It was a spectacle.”

The Sooners finished the season ranked No. 3 in the country in every poll that mattered, and Zabel became known as one of the most dependable players among those teams in the late 1960s. When his college career was over, he was taken sixth overall in the 1970 NFL Draft by the Philadelphia Eagles.

Zabel ended up playing on both sides of the ball in the NFL just like he did in college. The 6-foot-4-inch 235-pound ball player distinguished himself as a pass-catching tight end and a light ’em up linebacker for the Eagles, New England Patriots and Baltimore Colts over a 10-year career.

Print Headline: After the game, A former NFL football player relishes in his work off the field helping the homeless and tutoring children.