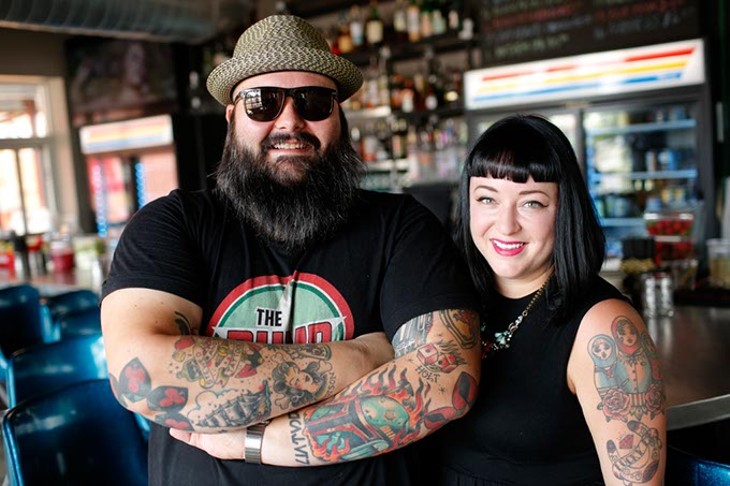 “It’s like Lord of the Flies, but without the terrible stuff,” said Hailey McDermid, who owns The Pump Bar with her husband Ian. “To work here, people need to be able to work on their own.”

As the early afternoon crowd at The Pump Bar, 2425 N. Walker Ave., grows into a boisterous mob of hedonists each night, the McDermids are behind the scenes (and behind the bar), keeping the order necessary to make everything feel like anarchy.

The sense that anything can happen is one reason The Pump has become a go-to watering hole for Oklahoma City’s discerning lushes in just eight short months.

“That’s part of what makes it fun,” Ian said. “You have to let things go a bit.”

They feel comfortable easing off because of Caram’s steady hand and the team-first attitude coming from chef Brady Clark (lately of Saints) and the rest of the kitchen staff. 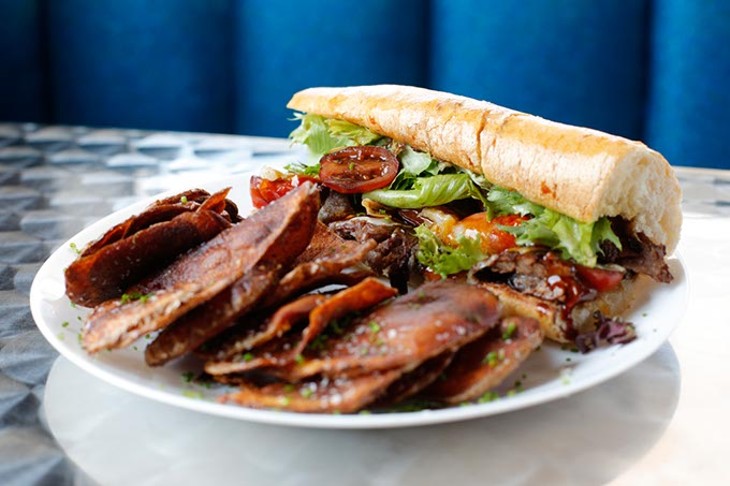 The Pump’s kitchen has changed quite a bit from the initial concept, but the McDermids are proud of the true sense of community that has grown there.

“I’ve worked in the service industry for 10 years, and Hailey’s been doing it even longer, like 15 years,” he said. “We’ve never been somewhere with a true team approach like this.”

That keeps them from being boxed in by any one cuisine, Caram said. Instead, they focus on a theme: comfort-kitsch.

It’s a not-so-serious approach to food that fits perfectly with their alcohol and atmosphere.

Fun dishes can be satisfying and leave room for drinks, Ian said. In recent weeks, that has included meals with a touch of New American, Indian, German, Korean flavors and more.

“This is what we’d eat when we’re really drunk,” Hailey said.

There’s an effort not to go too messy or too big. So while the Green Demon Burger ($11) looks like a food bomb about to go off, it’s a relatively clean and self-contained dish. The jalapeño burger, covered in roasted poblano peppers, salsa verde, melted havarti cheese and crispy onion strings, is gooey and luscious and begs diners to take another bite. But for a burger with so many parts, it’s a surprisingly clean eat.

Take a bite of the “Soy-f and Turf” Sandwich — a one-off special, like many on The Pump’s daily menu board — and prepare for a rush of salty-sweet bulgogi beef on a crunchy, crispy, buttery baguette. There might be a few crumbs, but there won’t be any leftovers.

The McDermids aim for fresh, scratch cooking that doesn’t skimp on ingredients or labor, which might account for the slightly higher-than-average bar fare prices. But customers are clearly enjoying the cuisine, as food sales continue to rise.

The Pump not only has food, Caram said, but it has finally quashed the eternal beef between kitchen and front-of-house staff that plagues restaurants everywhere. In order for the rambling, partylike atmosphere to continue for patrons, Caram said there has to be cohesion among the staff.

“We can only be enemies with thirst and hunger,” he said.

Hailey said that requires everyone to toughen up and create a sense of camaraderie. With a server corps of 50 women, she said it requires some mediation and setting everybody up to succeed.

“It takes a certain kind of person to do this job,” she said. “It’s organized chaos in 14-hour shifts.”

And while it does serve food, she said it is first and foremost a bar. People need to know who they’re waiting on, pay attention to moods, understand what’s going on in their lives. What makes a great bartender is also what makes The Pump a great bar: the personal touch.

That extends to the friendly atmosphere that keeps workers coming in early (and staying late) to hang out and lend a hand.

A bar so fun even the employees can’t wait to show up for their shifts? It’s little wonder, then, that the wide-open patio, the clean vinyl booths and the bathrooms where they’re always playing Harry Potter audio books packs in crowds every night.

Learn more about the venue at pumpbar.net.