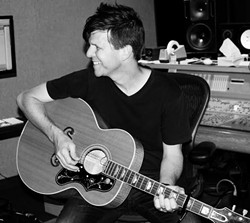 He made his name smashing instruments in the mid-’90s as singer and guitarist for The Nixons, but Zac Maloy now enjoys his role as a successful songwriter in Nashville.

The former Oklahoma alternative rock act’s frontman did not scorn his home state for Tennessee. Instead, he now hopes to bring Nashville’s best into Oklahoma City.

Maloy, who helped write “Temporary Home” for Carrie Underwood and “Words Are Medicine” for Tim McGraw, is a mastermind behind the first Oklahoma Songwriter’s Festival held at multiple Oklahoma City venues April 28-30.

In addition to live performances, local musicians can attend free panel discussions led by leading industry songwriters and insiders at the Academy of Contemporary Music at the University of Central Oklahoma (ACM@UCO), 25 S. Oklahoma Ave., Suite 400.

Maloy recently spoke with Oklahoma Gazette about the art of songwriting and why the festival is important to him.

Oklahoma Gazette: Why was it important for you to bring an event like this into Oklahoma, where you’re from?

Zac Maloy: Part of it was to bring some of my guys from Nashville in to see the city. It’s vibrant and as booming, culturally, as I’ve ever seen it.

The other thing was my sister (Tava Maloy Sofsky, Oklahoma Film & Music Office director) and I talked about creating almost a conduit, an artery, from Oklahoma City to Nashville.

OG: What’s your advice to the aspiring songwriters attending the festival?

ZM: Write all the time. Write with other writers. Cowriting is a very, very healthy exercise — something I resisted. I was in a rock band, and they said they were going to send me to Los Angeles to cowrite. “I don’t want to do that. What are you talking about? I can write my own songs.” But it was incredibly healthy.

Push yourself to write every day. Billie Joe Armstrong has a mantra that goes, “Write something every day” — a melody, a lyric, a title, something.

OG: Do you step into someone else’s perspective when you’re writing for them, or do you always approach songwriting from your own perspective?

ZM: That’s a great question and one, to be honest with you, I’m sort of asking almost every day. It’s easy to sit down and think, “I’m going to try and write a song for Tim McGraw.” The truth is, the song that I actually had on Tim McGraw’s last album, we didn’t sit down and try to write it for anybody. We just tried to write a great song.

I will admit I do think about it sometimes, like, “Oh, this would be great for Blake Shelton,” but to me, a great song is a great song. I’ve been surprised over the course of my career when I get the call that so-and-so wants to cut this song I’m like, “What? I wouldn’t have expected that at all.”

OG: Do you write things other than music?

ZM: It’s funny you should mention it. Of course I have a script idea and a book idea like everyone probably in this room. We don’t have to be just songwriters, but I will tell you that my focus is songwriting.