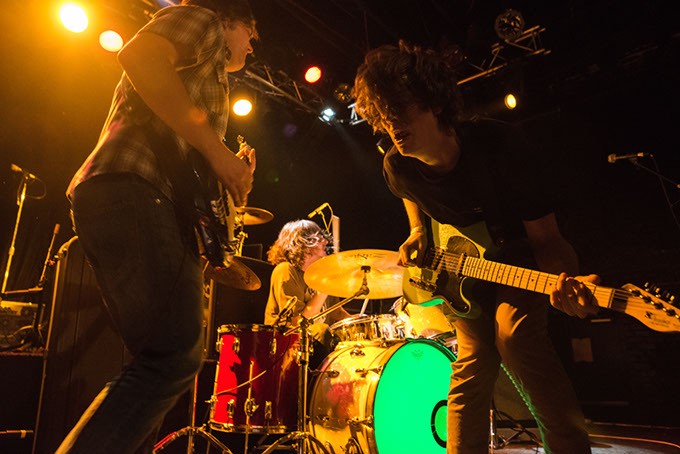 Jacking into an amp, stomping on a Superfuzz pedal and screaming into the night in two-minute blasts can be perfect medicine. For Fort Worth’s Mean Motor Scooter, getting loud and fast changed everything.

“It’s opened up a lot of doors for us as far as places that we can play,” said MMS bassist Joe Tacke, who performs with the group at 8 p.m. Feb. 25 at Your Mom’s Place, 3201 N. May Ave. “But there’s also the freedom of the music. Three chords strung together always sounds good.”

Before Mean Motor Scooter, Tacke, singer-guitarist Sammy Kidd and drummer Jeffrey Chase Friedman had a lot more restraint in their lives. Friedman and Kidd were in an acoustic pop group called Endless Sky, and Tacke played in the Dallas indie-pop group Spookeasy, which released its album Faux Show in 2012.

When those groups ran their course, Tacke said he and his bandmates bonded over their love of heavy, blasted-out garage rock.

“We listen to a lot of Ty Segall and Thee Oh Sees and Eagles of Death Metal, Husker Du, those kind of bands, so we have a lot of varying influences,” he said. “But we definitely set out to be a grungier, ’60s-and-’70s garage-rock band.”

True to that vision, Mean Motor Scooter’s self-titled 2015 EP provides the perfect soundtrack to flooring it in a T-top Trans Am reeking to the headliner with skunk weed.

Following an intro that crunches like a long-lost Deep Purple instrumental, the group immediately engages with their scuzz-rock spirits on “Monsters,” sounding a little like Kurt Cobain taking a fast “Slow Ride” with Foghat.

The group downshifts for “Son, I’m an Alien” before revving back to top speed for the grand finale, “Put Me Down Like a Dog.”

Mean Motor Scooter’s commitment to loud and fast rules quickly resulted in a large and loyal DFW following. The trio’s unending onstage energy resulted in the group winning Fort Worth Weekly Music Awards’ Rock Band of the Year trophy in 2016.

For their next trick, Mean Motor Scooter will release a full-length album in March. Titled Hindu Flying Machines, it takes the band’s garage barrage and sends it about 10 years farther into the past.

A concept album about the Sumerians, Hindu Flying Machines is filled with Kidd’s lyrics about airborne cities and lizards descending to Earth to impregnate humans.

“I think you’re going to hear a lot more ’60s sounds to it,” Tacke said. “Our drummer knows everything about every punk band that’s ever been, but I’ve been listening to a lot of T. Rex lately, too, so that’s coming through a little bit now.”

Before taking off with Mean Motor Scooter, Kidd and Friedman sang more sensitive songs like “Alprazolam,” their ode to Xanax, and Spookeasy recorded a trippy psych-rock track titled “I’m Tired.” But with their new group, Tacke, Friedman and Kidd have no time for exhaustion or ennui as Mean Motor Scooter burns rubber.

“In our previous bands, we never had crowd surfers,” Tacke said. “That’s been a welcome change, for sure.”