Atop Founders Tower, 3Sixty introduces a new menu to balance the old and the new. 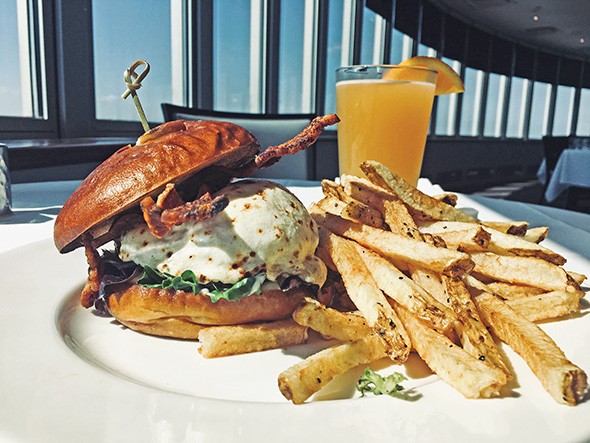 In a space that is one of the most unique and historic in Oklahoma City, the owners of 3Sixty Restaurant & Bar, 5900 Mosteller Drive, want to balance the pull of nostalgia by tapping into market trends of the present.

Owners John Curtis, Johnny Yi and Sean Crowe opened the restaurant atop Founders Tower in 2017, and after two successful years of a concept that is more relaxed than previous iterations, debut a new menu this week.

“We’re building on what we’ve established,” said Curtis, who has a background at Hal Smith Restaurant Group and is the operating partner of 3Sixty. “We wanted an upscale, casual vibe. It’s a place where you can relive old memories of proms, graduations and proposals but do it in a more relaxed atmosphere. You can come in and feel great in jeans and a T-shirt, but you can still wear a suit and tie for a celebration. I think the new menu is going to make it more appealing.”

Curtis and Yi think the addition of confit-fried chicken thighs might challenge the pork chop for best-selling item. The thighs are confit-ed in olive oil — a process that is similar to deep-frying but done at a much lower temperature for a longer time to increase its moisture level and ability to be preserved for long periods of time. After the thighs are cooked in olive oil, they get a tempura batter with spices and rosemary for a quick deep-fry for crunchiness and are finished with a sweet and savory tomato jam.

The thighs are stacked like a tower over a bed of mashed potatoes, a move that ownership hopes makes a memorable impression for diners as well as being tasty. 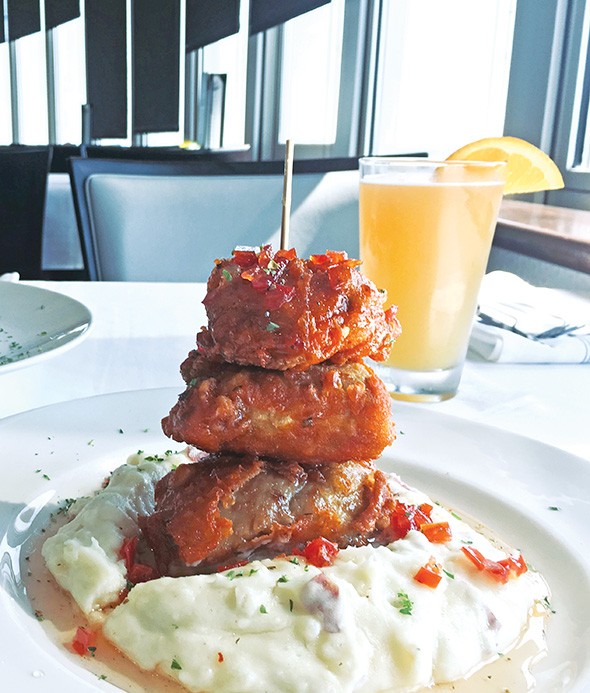 “It allowed us to broaden our base and appeal to new people. I think we were missing some things with the younger crowd,” Yi said. “The younger crowd, they like the interesting dishes, stuff that you can’t find elsewhere.”

3Sixty hopes the addition of a burrata melon salad that pairs fruit, prosciutto and cheese with orange blossom vinaigrette ($15).

Many restaurants serve ahi tuna just as the way 3Sixty used to — seared tuna steaks with miso and sesame — but ownership is hoping the new tempura ahi fishsticks ($14) with miso honey and jalapeño offer something that generates an Instagram post and word-of-mouth recommendations.

Wild boar makes two appearances on the menu, which ownership said is hard to find at other restaurants in the city. The boar makes up the restaurant’s only burger ($15), and its gaminess mingles with an herby pesto, melted mozzarella, greens and crispy bacon. It also makes an appearance in a pasta dish as a wild boar ragu with onion, garlic and basil ($20).

“I never would’ve dreamed to serve wild boar,” Yi said. “I was skeptical at first, but both dishes are home-runs, and it’s something unique.”

The turmeric-crust on the mahi-mahi imbues a unique yellow hue that is served over Kalamata olives and sun-dried tomato orzo pasta ($24), which is also a new addition as a side dish.

According to a 2018 study issued by SevenRooms, a restaurant reservation and guest management platform, customers are enticed to try a restaurant for the first time through word-of-mouth. The study showed that 53 percent of consumers dine at a new restaurant after a recommendation from friends and family. Social media posts to Facebook (23 percent) and Instagram (10 percent) represent a growing number of referrals.

"Younger people are looking for an experience and not just good food."
—John Curtis tweet this

“Younger people are looking for an experience and not just good food, which is important, but they’re looking for something unique,” Curtis said. “Everyone is into something they can document on social media or talk about with a friend. I think we do that with the food and the views and unique location.”

When Founders Tower opened in 1964, it was Oklahoma City’s first skyscraper outside downtown and the area around it was largely undeveloped.

As the building has gone through numerous changes over the decades, its location that once represented a landmark of developmental sprawl north of downtown now stands in the middle of Oklahoma City’s northward expansion.

The restaurant atop Founders Tower, perched 20 stories above the city, has long been a site for celebration and high-end steak dinners, regardless of the concept. Chandelle Club existed when the building opened, and it became the second restaurant in the country to offer a rotating view, after Seattle’s Space Needle. The space operated as Eagle’s Nest and Nikz at the Top before it sat empty until the opening of The George Prime Steakhouse in 2013, which installed pillars in the restaurant that impeded its ability to rotate.

“We thought it could be something really neat, so we took the plunge,” Curtis said. “Hopefully [the new menu] opens it up to a larger demographic that hasn’t come into contact with us and builds on the momentum we’ve already established. We want to open it up to the people that might get engaged here in the future, not just the ones who already did.”

Curtis said the menu will be overhauled twice per year to include more seasonal ingredients with heavier fare set for the fall.