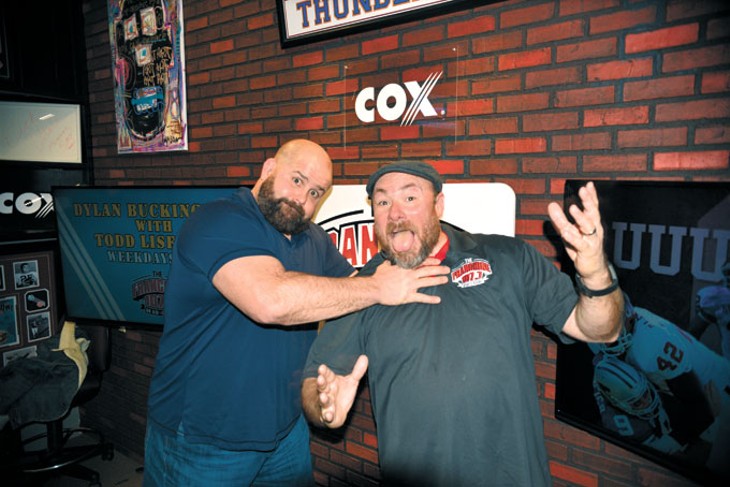 It’s a few minutes before Franchise Players is about to go on the air for the first of its weekday 12-3 p.m. show on 107.7 FM following the University of Oklahoma’s dramatic loss to the University of Georgia in the National Semi-Final Rose Bowl, and its hosts are more focused on having fun than dwelling on the loss.

The show featuring host Jerry Ramsey and former OU football players and National Football League (NFL) players Kelly Gregg and Gabe Ikard — the latter of whom currently calls in from New Orleans, where he is a member of the Saints — has become one of the most entertaining Oklahoma City sports talk shows, pairing Ikard and Gregg’s player insight with Ramsey’s fan perspective.

About 20 minutes before the Tuesday show is scheduled to air, Ramsey is trying to locate the Paqui brand Carolina Reaper Madness chip that he must eat following losing a bet with Gregg over the Rose Bowl. Someone has moved the chip whose challenge has become so popular, especially on local television segments, that it is sold out of its online store and costs $60 on eBay.

“How do you even know it’s hot, Jerry?” Gregg asks him sarcastically.

“Because it says ‘world’s hottest chip.’ It got sent to us in a coffin,” he replies.

“Do you remember when Subway said their sandwiches were a foot long and they weren’t really a foot long?” Gregg asks.

A producer walks into the room and asks if he should send someone out to buy milk to help Ramsey’s dare.

“‘Trust me; I eat spicy stuff all the time. I have the answer. Milk is a bad choice,’” Ramsey retorts with the famous Anchorman line.

After Ramsey accuses Gregg of stealing the chip, producer Colby Powell reveals that he is the one who hid the chip.

“It’s a plot twist,” Powell says as he walks out of the office toward the studio. “I knew you would blame the prankster (Gregg).”

That kind of banter has lead to the trio’s rapport that balances lighthearted moments with sports analysis.

Minutes after the noon show begins, Gregg and Ikard are breaking down the game, which saw Oklahoma blow a 17-point first half lead and miss a berth in the National Championship game.

“Every time I fake that tennis ball trick with my dog, that’s what I saw out of those Oklahoma linebackers last night,” Gregg says as he discusses effort and misreads by the OU defense.

“Normal fans like me don’t see the lack of effort on the second stage of the defense,” Ramsey says.

Franchise Players debuted on The Franchise 107.7 in late summer 2013 as KRXO, already the flagship station for OU football, as Tyler Media made the transition from classic rock to sports radio full-time.

“I just dance around while the two football minds go at it,” Ramsey said. 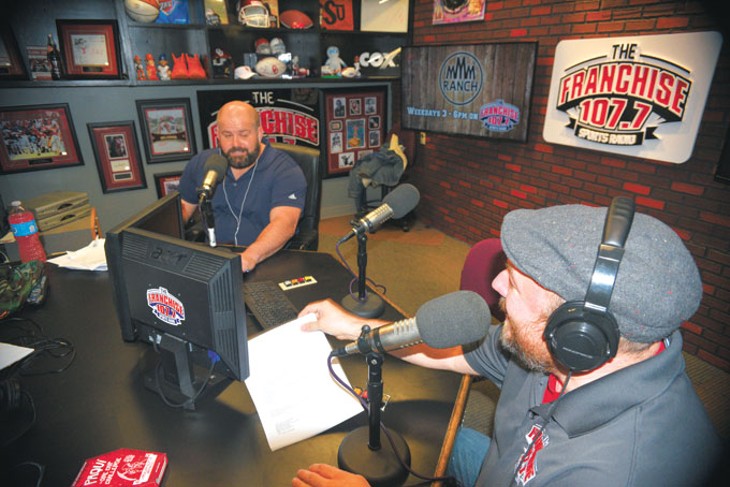 Gregg is a 13-year NFL veteran. Eleven of those years were with the Baltimore Ravens, where he was a defensive tackle anchor for the winning defense of Super Bowl XXXV that is considered one of the greatest of all time.

“The insight like the Ray Lewis stories or the Ravens on the plane stories are amazing; he is so forthcoming,” Ramsey said of Gregg’s playing career.

Ikard played center for OU and joined the station after what he thought was the end of a four-year NFL career, but surprisingly, he was signed to the Denver Broncos practice squad and is currently an active member of the New Orleans Saints as their season continues into the postseason. Ikard calls in every Tuesday from a studio near the Saints’ practice facility and checks in multiple times a week.

Ramsey puts together a map of the show at least an hour before air, and the crew is careful not to talk too much about upcoming topics before they go on air.

“Don’t get it twisted; Kelly Gregg has a steel-trap mind, and he’s constantly doing research,” Ramsey said. “He has stuff ready to go, not just football. He’s been ready for everything from football to hunting and fishing to Bitcoin.”

Gregg said the transition from his playing days into a media role has been challenging in ways he didn’t expect. On one hand, he said that he was hired to talk about sports just like he would at a bar or in the locker room with teammates, but it has taken some adaptation to get comfortable on the other side of a microphone.

“It’s harder to do this job than it is to play football,” Gregg said. “I’d rather be wearing a helmet, trying to fight a reach block, than trying to interview somebody.”