Frankie Valli & The Four Seasons ring in the new year 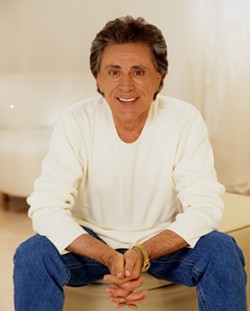 After nearly 65 years at the mic, the man with the magic falsetto, Frankie Valli, shows no sign of slowing down. Valli, 81, together with The Four Seasons, performs 8 p.m. New Year’s Eve at WinStar World Casino and Resort in Thackerville.

Valli, born Francesco Stephen Castellucio, scored dozens of Top 40 hits — including “Big Girls Don’t Cry,” “Walk Like a Man” and “Rag Doll” — both as a solo artist and with The Four Seasons in the 1960s. Valli also recorded the Barry Gibb-penned theme to the musical Grease in 1978. He also acted in multiple projects over the years, including appearances as Rusty Millio in seasons five and six of The Sopranos.

Interest in his life and music has seen a resurgence in the last decade due to the popularity of the Tony Award-winning musical and feature film Jersey Boys. Both chronicle the success and breakup of The Four Seasons.

It’s his smooth falsetto that sets Valli apart in the history of American popular music. In a 2012 interview on the NPR program Weekend Edition Saturday with host Scott Simon, Valli spoke about his voice.

“You know, I thought everyone had falsetto,” he said. “And since I wasn’t a schooled singer who studied with anybody, I just thought anybody who had a voice could do anything they wanted with their voice. Not until much later on in life did I realize I had been blessed with an incredible range, and then I saw it from a different perspective.”

Valli also credits doing impressions of popular singers he heard on the radio during the development of his singing voice. In the same interview, Valli said he began to realize what the vocal mechanism was capable of by singing like other vocalists. He also likened vocalists to bodybuilders and said good health and practice every day is a must.

Oklahoma Gazette requested to speak with the singer about his history and current tour, but his publicist declined, saying he wasn’t doing press interviews at this time.

The beginnings of what would become The Four Seasons took root in 1954 as The Variatones, later changed to The Four Lovers. After six years with no real success, lineup changes ensued and Valli, Bob Gaudio, Tommy DeVito and Nick Massi became The Four Seasons in 1960. The group took the name from a cocktail bar in a bowling alley.

Maybe it was the new lineup or the name, but success soon followed. The group’s first No. 1 song was “Sherry,” followed by “Big Girls Don’t Cry,” “Walk Like a Man” and “Candy Girl.” The group did what many other acts could not — it survived and thrived during the onslaught of Beatlemania and the British Invasion.

Though hit songs slowed during the 1970s and 1980s, with the exception of “Grease,” Frankie Valli & The Four Seasons — either apart or together due to separation during the time period — was still a strong live act.

Since the debut of the Jersey Boys musical in 2005 and the film in 2014, the spotlight again shines on Valli. Even at age 81, he can and loves to entertain and still tours regularly. After his Dec. 31 concert in Thackerville, he has over half a dozen shows scheduled in Louisiana, Texas, Florida and California. Print headline: Start believin’, ‘Hitmaker’ is the word, and Frankie Valli & The Four Seasons’ songs still have the groove and the meaning they had half a century ago.