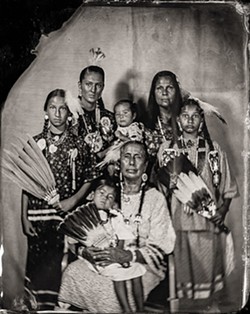 The Native American images taken by Edward S. Curtis between the years of 1906 and 1930 are iconic. In over 20 volumes of black-and-white images, Native individuals throughout the United States are shown in their tribal regalia with a spiritual aura about them. Yet these images are seen by some in the Native community as romanticized and problematic.

But the Curtis images also are shrouded in the troubling theme of the “vanishing race,” one that conveyed Native Americans and their culture would disappear entirely if non-Native photographers such as Curtis weren’t there to capture them on film.

“I think there’s great value in those images in that they’re beautiful,” said Navajo photographer Will Wilson. “But then I also think that this notion that Native Americans are vanishing is dangerous. … We haven’t vanished. If anything, there’s been a kind of resurgence of Native Americans since Curtis finished his project.”

However, Wilson’s work — PHOTO/SYNTHESIS — differs from Curtis significantly. Rather than the photographer acting as sole artist, Wilson’s work is done in a spirit of collaboration. This includes Wilson, the seven tribal governments and the University of Oklahoma’s Fred Jones Jr. Museum of Art (FJJMA).

While Wilson is the photographer, he gives a great degree of credit to Chickasaw and Choctaw artist heather ahtone, FJJMA’s James T. Bialac Associate Curator of Native American and Non-Western Art.

“The central question that [Wilson] and I arrived at was ‘How could images be created that have their starting point in the beautiful images of these tribal community ancestors? How can we make [Native communities] involved and make them full partners in the creation of these images?’” ahtone said about collaborating with the tribes. 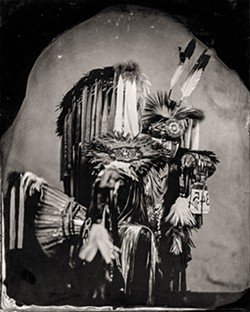 The initial concept became a two-year process of approval through the museum’s internal committees and gaining trust with tribes’ political and cultural representatives.

Originally, the goal was to photograph direct descendants from those in the Curtis works. However, this wasn’t always an easy task.

In some cases, identification wasn’t possible. When this happened, tribal leaders designated those who would represent the tribe for the exhibit, with many choosing to wear traditional regalia for their portraiture.

By the time they took the photos, summer 2016, more challenges arose. In order to keep with the authenticity of Curtis’ technical approach, Wilson went to great lengths to use both authentic equipment and the development process.

This included a Civil War-era lens, a “wet-plate collodian” onsite processing of metal plates, people within the portraits having to be still for a minimum of seven seconds and the challenge of using chemicals with a 95-degree boiling point in the post-100 temperature of Oklahoma summers. Some of the solutions included a portable ice-fishing tent as a darkroom and keeping the chemicals on ice in a cooler.

“The emulsion has to stay wet throughout the process,” Wilson explained. “If it dries, you won’t get an image.”

Wilson also combined the techniques of another time with the digital age, giving participants digitally scanned images of their portraits in addition to the developed image through wet plate development. However, some aspects of the older technologies were left intact, such as lettering on T-shirts remaining backwards. 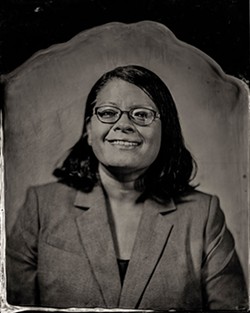 More than 400 guests attended the Jan. 26 opening, including over 50 of the 123 portrait participants, some driving from as far as Pawnee and Pawhuska.

The final exhibit includes 53 new Wilson photographs and 33 of Curtis’ images shown for comparison. The sizes include both the original plate size and enlarged images. Selected video images of Wilson’s portraits are additional treats in the exhibit.

Called “talking tintypes,” these video images can be viewed on either a smartphone or tablet through the Layar app.

“I believe that what [Wilson] does in creating those images is he gives authorship, which is a very generous act for an artist to do for the people who are being represented by those images,” ahtone said. “The energy from those people is a sense of positive ownership and engagement directly with the viewer. In that sense, the role is shifting the energy between what’s resolved in the image and the people sitting in the chair through an alchemy that’s executed through that lens and through the human engagement that happens through the process of creation of that image.” 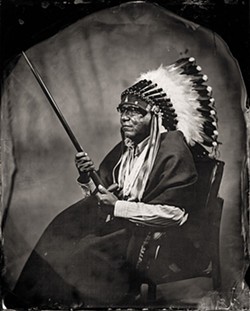 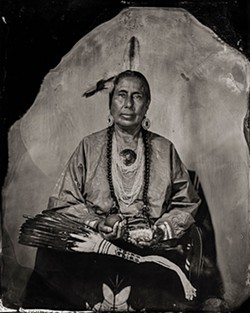