After one of its best years, Freedom Oklahoma readies to ramp up its advocacy for the state’s LGBTQ+ community. 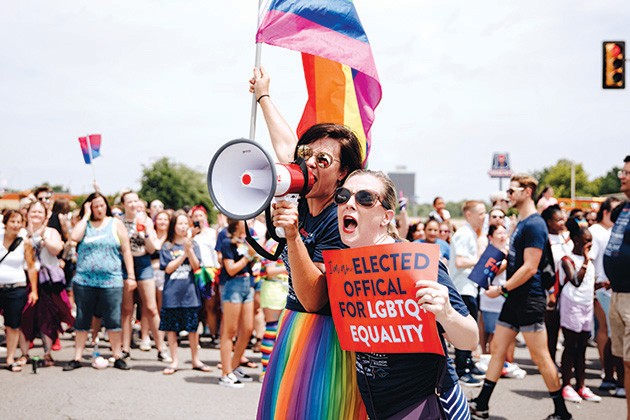 Freedom Oklahoma aims to build off a successful year for Oklahoma’s LGBTQ+ community by focusing more on diverse sects of the community and advocating for more issues. With October being LGBT History Month, Allie Shinn, Freedom Oklahoma executive director, said the organization is reflecting on recent history to inform what is next to come.

The community had several major victories in 2019, with Norman modernizing its nondiscrimination ordinance to include LGBTQ+ people, the election of Oklahoma City’s first openly gay city councilmember and the state’s largest Pride ever.

“It’s been a huge year for LGBTQ people in Oklahoma,” Shinn said. “Not only did Norman just become the first city in Oklahoma to adopt comprehensive nondiscrimination protections for LGBTQ people, but we also saw Oklahoma City elect its first openly gay council member, James Cooper. … We saw our community really rally together in the last minute to throw a Pride that maybe wouldn’t have event happened at all and then became the largest Pride in Oklahoma City history.

“On top of that, for the first year in recent memory, the Legislature did not file a single apparently anti-LGBTQ bill this year, and that’s huge. For a population that’s used to holding their breath every single February through May to see what sort of attacks the Legislature might throw, to know that we have so convincingly made our case that the Legislature was willing to take a step back and really focus on policy elsewhere was a huge sigh of relief and a huge victory and a sign of what all we’ve done.”

“We’re calling it cocktail or costume attire, and the costumes are definitely encouraged because we are celebrating 50 years of the Stonewall Riots. Our theme is ‘through the decades,’” Shinn said. “It’s an opportunity to look back on where we’ve been and celebrate how far we’ve come. And to talk about what’s next for our future. … As we grow Freedom Oklahoma, it’s an opportunity to make sure we are fully representative of the LGBTQ community.”

“If we all work together, we believe that we can create an Oklahoma in which LGBTQ people can fully thrive.”
— Allie Shinn tweet this

Several individuals will be recognized at the gala for their local contributions, including Ward 2 councilman Cooper and Rep. Chelsey Branham, who are receiving the Lawmaker of the Year award.

“Both of these people are people who have represented the LGBTQ community in ways that I wish I would’ve had when I was growing up. There have been some incredible trailblazers in this community,” Shinn said. “What is really so impactful about seeing [LGBTQ+] people … in government is that our government can look like us. Representation is so important, and we can’t be it if we can’t see it. So simply by being there and being strong and out advocates for their communities, these lawmakers are giving young people across Oklahoma permission to be exactly who they are and to reach for the stars while they’re being themselves.”

While the past year has been positive for LGBTQ+ Oklahomans, Shinn said the work is far from done in the local community and through all levels of government.

“Something that a lot of people might not know is that right now in Oklahoma and many other places in this country, it is perfectly legal to be fired or denied a job based on who you are,” she said. “We think of this post-marriage equality world where we really have a lot more acceptance about LGBTQ people. We’re more likely to see LGBTQ people on TV and in government. But here’s the truth: I could get married today and be fired tomorrow simply for being who I am.

“What Norman did is say, ‘No matter how the court rules on this, we are a community that does not believe you should be discriminated against based on who you are, and we’re going to put our money where our mouth is and enshrine that into our laws here in Norman, Oklahoma.’ And we’d love to see that happen statewide and in cities like Oklahoma City and Tulsa and Lawton, and ultimately, we need to see that at the federal level.”

While there was no anti-LGBTQ+ legislation at the state level during the last legislative session, a bill introduced by Rep. Jason Dunnington that would’ve outlawed conversion therapy for minors failed to pass.

However, a bipartisan interim study was approved for Oct. 15.

The study, requested by Dunnington and Rep. Randy Randleman, will analyze the short- and long-term effects of practices intended to change a minor’s sexual orientation, gender identity or gender expression.

“Rep. Randleman has joined Rep. Dunnington in asking for this study, and that’s so important for us because we know that protecting our youth is not a bipartisan issue,” Shinn said. “We know that good, kind-hearted Americans and Oklahomans don’t support child abuse, but we also know that so many people just don’t have enough information about what’s going on. This is an opportunity to bring experts to the table to get more information out there and to start building a coalition of support.”

To better serve local communities, Freedom Oklahoma is shifting slightly as an organization and making stronger efforts to represent all facets of the LGBTQ+ community through its board and staff as well as through the issues it tackles.

Freedom Oklahoma’s political advocacy takes off when the Legislature is in session. To get involved in advocating for equal rights, Shinn encourages people to sign up for the organization’s emails or to volunteer.

“LGBTQ people live in every single corner of Oklahoma,” she said, “and if we all work together, we believe that we can create an Oklahoma in which LGBTQ people can fully thrive.”