In many ways, Soko couldn’t have asked for a better introduction to the world than First Kiss, a short film featuring 20 total strangers asked to share a first kiss on camera. 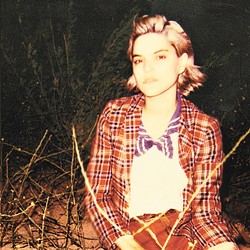 In many ways, Soko couldn’t have asked for a better introduction to the world than First Kiss, a short film featuring 20 total strangers asked to share a first kiss on camera that has amassed over 90 million views since premiering earlier this year. It was a beautiful, soul-baring three minutes that saw the French transplant sharing a lip-lock with a girl she had met just five minutes before, soundtracked by her similarly tender and heartfelt song “We Might Be Dead by Tomorrow.” A match made in heaven.

“That’s just how I am. I don’t know any other way,” Soko said. “I have no filters, so everything is always too raw, too sensitive, too emotional, too high, too low, and that translates into my music, obviously.”

But really, First Kiss was just the perfect accumulation of her disposition and a lifetime’s worth of creative work — work that has bubbled just below that sort of true, international breakout moment the video proved to be.

The song came from her 2012 debut, I Thought I Was an Alien, a work that was already proving influential, albeit in smaller circles. The album came just years after acting in a number of French films, a tour in support of M.I.A., a song on a Spike Jonze short film and so much more.

All those bright spots were born out of a dark moment: the sudden death of Soko’s father when she was just 5 years old. It was a colossal experience, entrenching itself into every thought, word and action and demanding the sort of release that creative endeavors like acting and songwriting provide.

“It made me aware that the end could be anytime, anywhere, all when you are supposed to be this carefree kid playing freely,” Soko said. “I had barely any friends, and I think that’s what made me have a crazy imagination. It cultivated this part of me, because it was important for me to feel understood.”

Honesty — with yourself, others and your mortality — was so quintessential to I Thought I Was an Alien, inspiring those like Oklahoma City’s own Skating Polly, whom Soko recently met in Los Angeles. The French songstress describes the Oklahoma City duo as “the badass little sisters I’ve always wanted to have,” and they’re finally playing together Sunday at Hillman’s Garage in Tulsa.

And that won’t disappear from My Dreams Dictate My Reality, the follow-up to Alien due sometime next year, but it will be presented in a different way. The soft, acoustic-driven melodies are cranked up with New Wave-divined verve a la The Cure, under the guidance of producer Ross Robinson, who worked with the ’80s new wave group on its eponymous 2004 record as well as At the Drive-In’s Relationship of Command and Glassjaw’s Worship and Tribute.

“I wanted to sound like the illegitimate daughter of Robert Smith,” Soko said of the heavier, “ballsy” sound. “I think I just got sick of writing songs that make me cry each time I sing them. It made me feel safe in the songs, surrounded by so many sounds that I could still be vulnerable in what I talk about but feel a bit less naked somehow.”

With four films booked to shoot in the next year on top of the new album, more touring and self-directed videos to come, 2015 looks to be a busy and important year of reinvention and reaffirmation, but at least introductions are out of the way.

Soko with Skating Polly and The Daddyo's

Soko with Skating Polly and The Daddyo's