An Omaha-based coffee chain expands into the Oklahoma City metro. 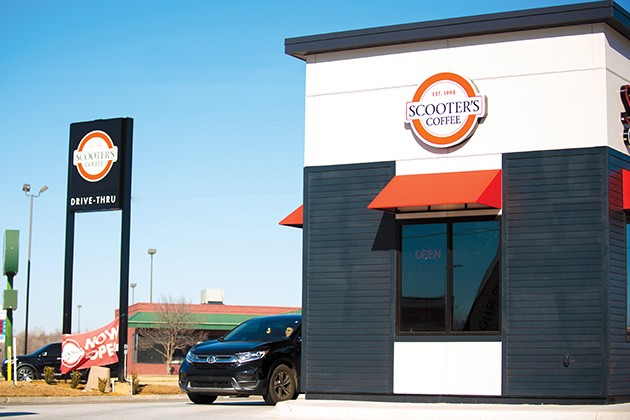 The first Scooter’s Coffee in Oklahoma City opened last month in the far northwest part of the city. Two more are expected to open soon along Route 66, and a total of about 10 will be open by the end of the year.

Scooter’s Coffee was founded in Nebraska in 1998 as a drive-thru coffee house focusing on “high-quality drinks, speed of service and a big smile.” According to a press release, the chain is “at the dawn of a strategic growth phase in the Midwest and nationwide.” Josi Orsi, senior manager of brand execution, said the company is excited to enter the OKC market.

“We opened our first store in December … and that one is off to a great start, so we’re super excited,” Orsi said. “We have another one opening here in January, so we’re getting rocking and rolling. In 2020, we have around eight more stores planned to open. We’re excited to keep growing in the community and getting involved with these communities.”

“But we definitely have our eyes on a few different sites as well, kind of getting everything in the works,” Orsi said. “It’s just going to depend on all the sites and how everything comes together, but I would say we’ll probably have seven to nine stores total in the area by the end of the year. … We definitely want to keep growing. We have about 50-ish stores in Omaha and a total of like 90 in Nebraska, so we want to keep that momentum going and take that kind of market and bring it to OKC.”

Currently, all planned Scooter’s Coffee will be drive-thru-only locations. The chain’s motto is “Amazing people, amazing drinks, amazingly fast,” which Orsi said helps distinguish them from other coffee shops.

“One of the most important things we like to focus on is being fast at the drive-thru, so we don’t want people to have to wait there forever,” she said. “We want to get them through and onto their day and give them a great start to their day. Obviously, the quality in drinks is also important, just serving up the highest quality that we can with our coffee and all of our ingredients that we put in our products.”

“One of the most important things to us is making those connections in the community and getting involved at the local level.”
—Josi Orsi tweet this

A grand opening and ribbon-cutting event is being planned for the store that’s already open, and similar events are expected for most locations that will follow.

Scooter’s Coffee will also be giving back by hosting a Day of Giving toward the end of the year in which a percentage of proceeds will be donated to a top-nominated local nonprofit. People can already nominate their favorite local nonprofit at scooterscoffee.com/nominations.

“As an incentive for showing kindness and helping the community by nominating, participating customers will receive an email back with an exclusive Scooter’s Coffee coupon offering a free small drink or half off a medium or large drink,” according to a press release. “Then, toward the end of 2020, the participating Scooter’s Coffee locations will hold a Day of Giving for the top-nominated nonprofit organization and donate a percent of the proceeds.”

Despite being a chain with nearly 200 locations in more than 15 states, Orsi said Scooter’s Coffee makes an effort to engage with its local communities.

“That’s the biggest thing when we go into new communities and in our existing communities,” she said. “One of the most important things to us is making those connections in the community and getting involved at the local level because our business is all loyalty, and we want to make those connections and build upon that to know what’s important for our customers.”

To that end, Scooter’s already partnered with the Edmond nonprofit The Hugs Project, which sends care packages and various items to troops abroad.

“Right before the holidays, we donated … close to 800 bags of coffee, so they can send them to the troops overseas,” she said. “That was a lot of fun helping them with that, and we just love to make connections in the community. That was something that came up when we were exploring how to make connections, so we’re really excited to have made that donation.”

All of Scooter’s Coffee drinks are available hot, iced or blended, with the Caramelicious as its signature drink. The chain was named after the nickname of a co-founder’s daughter, which its website said fit well with its mission to keep customers happy by having them “scoot in and scoot out” quickly.

“All of our cups have a smiley face sticker on them and we change those out all the time, but it’s kind of a good way to be like, ‘Have a nice day,’ and to bring a smile to our customer’s face,” she said. “It’s just to bring a smile to our customer’s face. It’s always fun to see those on the cups and what different ones are coming out. It just adds to that personal experience with their barista and a really delicious drink.”