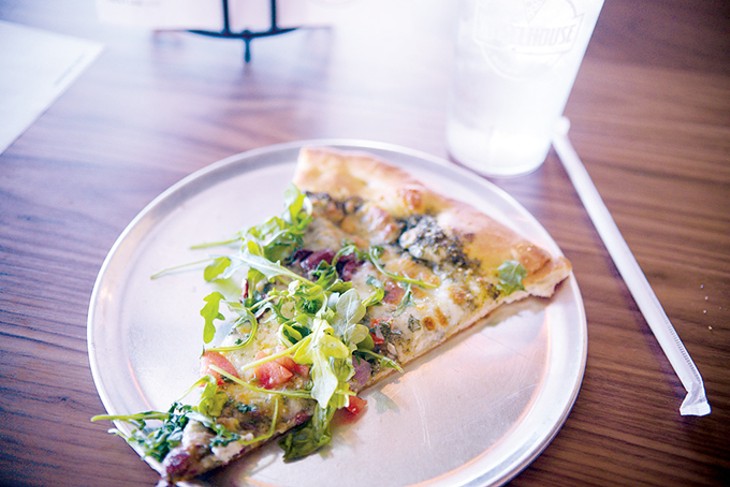 Oklahoma City’s robust independent pizza market received a new addition from some of the city’s most experienced restaurateurs with the opening of Wheelhouse Pizza Kitchen at 11109 N. May Ave. at the end of June.

The by-the-slice and New York-style whole pies with creative toppings are a joint concept from Jimmy’s Egg founder Loc Le and managing partner Michael Jones. Jones was the chef and founder of Lottinvilles Wood Grille and Flatire Burgers.

“We thought that if we could offer really good, quality pizza at a rapid pace with solid customer service and reasonable price points, we felt we could set the market,” Jones said.

Le approached Jones after he closed Lottinvilles in 2017 after 18 successful years in Edmond. Jones said he jumped at the chance to build on his experience at San Francisco Baking Institute to create a signature for Wheelhouse. Jones baked all of the bread at Lottinvilles, including ciabatta from a sourdough starter, and was eager to build on his baking skills.

“After doing bread for so many years, it really helped me out even though pizza dough is a different idea,” Jones said. “We felt there was enough competition that we wanted to veer [from what was already offered].”

After many experiments, Jones settled on a New York-style made with Caputo 00 flour (often referred to as double O), which is finely ground and has a low gluten content, meaning the dough has less elasticity.

The dough for the pizza is made fresh every day and then goes through a 24-hour proofing process — about twice as long as the standard pizza dough proof — and is rolled out, piled with sauce and toppings and cooked in a 1000-degree-Fahrenheit oven. A 10-inch gluten-free pizza is also available for a build-your-own-pizza option (starting at $11.99).

“[The extra proof] gives the outside crisp and the inside chewiness of the crust,” Jones said. “As the yeast starts to heat, it makes the dough rise differently. New York crust is heavier on the water content. I backed off on the sugar; there is not much sugar or salt. It is yeast, olive oil and flour.”

Jones was responsible for creating the conceptual design of the restaurant, recipe, kitchen and menu design. He leaned on his experience at Tony’s Via Roma and his wife Lory, who is Italian.

Jones used his wife’s recipe for a meatball appetizer served on garlic bread topped with red sauce, mozzarella and Parmesan ($7.99). The meatballs are made with two types of Italian sausage and seared before being basted in pomodoro sauce.

The meatballs are also available as an individual topping on a build-your-own pizza or on the specialty pizza Guido’s Speedo ($25.99) Crushed meatballs join Canadian bacon, applewood smoked bacon, fried pepperoni and Italian peppers on Guido’s Speedo.

Jones said that the addition of fried pepperoni is a nod to a tradition started at Nomad II and continues at Sussy’s in Bricktown.

“I saw the fried pepperoni at the Nomad, and I didn’t know how they did it,” Jones said. “The difficulty with it is that the oil in the pepperoni comes out in the frying process, so it’s easy for it to be chewy. When it comes out successful, you get almost a jerky flavor.”

Traditional pepperoni is the top-selling slice and pretty much the No. 1 seller at any pizzeria in the country, Jones said, but he has been happy to see that a few specialty pizzas have earned favor from customers looking for a whole 20-inch pie.

“‘Yaya’ stands for ‘grandmother’ in Italian, and my wife is Italian and a grandmother, so this is a nod to her,” Jones said.

Wheelhouse’s 10 signatures pizzas comprise only a portion of its sales. Large slices sell for $3.79 with six options each day: cheese, fried pepperoni, Italian sausage and three rotating options from its signature pizzas.

The building’s former life as a Taco Cabana comes in handy, as Wheelhouse uses the old drive-thru to serve call-ahead takeout orders and by-the-slice orders.

“A text message is sent when the pie is ready to come out of the oven,” Jones said. “It’s pretty successful; it’s out of the oven and into their hand.”

Jones said that he and Le are happy with the reception from customers at Wheelhouse. A high-traffic location on the border between Oklahoma City and The Village has worked well.

“[At other pizzerias,] sometimes one person at a table has to yield to a type of pizza that they want,” Jones said. “Every time you come in, it is a different slice and it gives you an exotic experience. I need to give a nod to other people in the [OKC pizza] industry because there are a lot of good pizza places. We wanted to give it a shot and come at it in a different angle.”