A new kind of church, with a primary emphasis on cannabis, opened its doors in Oklahoma City on Easter Sunday. 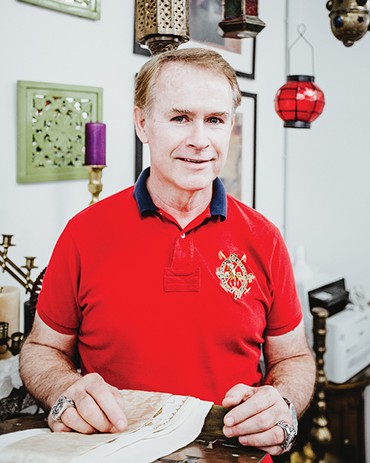 Inside an event center in a strip mall in northwestern Oklahoma City, more than 50 people gathered on Easter Sunday to consecrate a new church.

They have dubbed it Church 4 Twenty.

The mission statement, as outlined on the church’s website, is thus: “A Cannabis Church is one where Religion does NOT rule, Judgement does NOT prevail, Legalistic attitudes are NOT allowed and where PEACE, LOVE and JOY are the Foundational Pillars. These three (3) pillars uphold the Celestial universe displaying the movements of a Higher Design by the Master Designer!”

Mick Patterson headed up the first service at 4:20 p.m. for those gathered at 4604 NW 16th St., preaching not from a religious text but of the spiritual nature inherent in every human being that can be unlocked and catalyzed through various forms of ritual, including cannabis sacraments.

Patterson originally hails from Tulsa and attended Oklahoma Baptist University and Pat Robertson’s Regent University in Virginia. He left the Baptist faith years ago, he said, after disagreements with the church but has returned to help parishioners carry out the sacraments.

These sacraments include the use of a “meditation clip,” an ornamental roach clip crafted specifically for the church by a local artisan, the cannabis baptism (an anointing on the forehead with THC oil) and a communion meal, whereby hemp or cannabis are ingested in the form of infused food and drinks.

All three sacraments were on display during the church’s first gathering. The joint passed around the crowd, however, was not THC-laden cannabis but rather a roll of CBD-rich hemp. Patterson hopes to change that in future services.

Shortly after the sacramental joint was extinguished, Patterson baptized the first two members of the church. Mike and Darcey Sutterfield received the blessing upon their foreheads in the shape of a cannabis leaf in front of the rest of the gathering. The rites end with an updated form of a traditional Hindu greeting: “Cannamaste.”

“That will be another one of the sacraments of the church and one of the cannabis sacraments of the church. We find that many people — especially in Oklahoma, but many people across the United States — come from some kind of religious tradition or background or their family does. And so baptism in various forms, whether it’s a baptismal font, as an infant, whether it is a baptism by immersion underneath water, whether it is by sprinkling at some age as well and confirmation. Baptism is an understood concept by many, and it’s held to be important in people’s lives. And so, we also find that, again, from church origin, from centuries ago, that baptism was important in the church, that Jesus himself was baptized,” Patterson said. “We want to recognize what’s important. We’re not just going to take every trapping of the church and say we’re, you know, cannabis-izing it, not cannibalizing it, but cannabis-izing it — because, in our opinion, quite frankly, not every sacrament in other churches is what we’re about. But baptism as we understand it, and as we are presenting it, as I tried to indicate, but maybe in an inept way, is that is an outward expression of an inward spiritual experience. There, again, not religious, but a spiritual experience. And for us, that spiritual experience is an awakening a time in our life where there’s an epiphany of the light.”

Unlike other churches that require tithing or that pass a collection plate, Church 4 Twenty will not. But it will be accepting voluntary donations to keep the church running and help those in the congregation who wish to get their medical cannabis cards. One of the ways they hope to fundraise is to sell meditation clips for a slight markup. The price has not been set, but Patterson said they will be given for a donation that will not exceed $40.

The church has no settled tenets or dogma, but those will be codified by participants in the church in the upcoming month and then published. Church 4 Twenty is not meant to be a denomination of any particular religion but open to all members who wish to form a community with bonds that are spiritual but not necessarily religious.

“We want it to be the church of the people. And so we want to hear what people have to say, what they believe in. The biggest thing that we hear from people who have grown up in church, and many who have aren’t in churches now, some who were in church on Sunday morning and then came to us at 4 Twenty, is that they are tired of religion, they are tired of stained glass, resonant voices and cloistered elements that are separated from them. And as a result, they cannot do this, they cannot do that and there’s not very much they can do except go to church and tithe, or give money, and pray,” Patterson said. “We have a much larger emphasis on meditation than we do on prayer. That doesn’t mean that people can’t pray, however they choose to or not to. But we believe that the Bible as well as other religious writings, if you will, or faith writings, have a lot to say about meditation and that, again, even those outside of the religious constructs have much to say about meditation and how it can change your life. And so that’s what we want to be as all we can be, to borrow a military term or phrase, but it’s because we are spiritual individuals and we believe in our bodies; our minds are much greater than what we could have ever imagined them to be. And things like cannabis, things like meditation, which are natural, which are elemental from the basics of this earth and galaxies and our own physical being and spiritual being change us, transform us and can indeed change and transform others and the world around us.”

Church 4 Twenty has also invited Roger Christie, who founded the THC Church in 2000 in Hawaii, to attend and give guidance to the newly formed church. He will attend the 4:20 p.m. service on May 19.

The present location might not be the final location of the church, and many have approached Patterson about opening affiliate congregations, which he said they are open to. Those wishing to do so can reach them by phone at 405-422-0015.

The church will also be available to perform religious rites on its own or alongside other religious figures in peoples’ lives for funeral rites and, hopefully, cannabis wedding ceremonies.

“It’ll be significantly different because while that may be what they desire, their biggest desire, if they’re wanting to be involved in cannabis wedding is cannabis first and those are second,” Patterson said. “Not to necessarily minimize or say that they don’t believe in God or they don’t believe in Jesus or they don’t believe in whatever, but the recognition is what brings them together and what brings those people together that are supporting them in their ‘I doobies’ is the understanding that peace, love, acceptance can be found, in their opinion, in a very strong way, perhaps some would even say the best way, but at least at a strong way, through cannabis.”