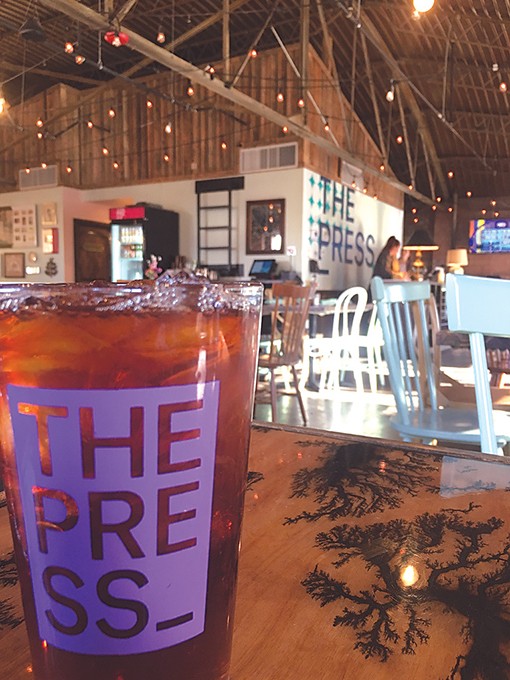 On more than one occasion while walking through 16th Street Plaza District, I’ve either been stopped by someone on the street or overheard someone ask the same question: How do you get to The Press?

Located about a block south of 16th Street at 1610 N. Gatewood Ave., The Press is a highly popular restaurant from Hungry Town Concepts (The Mule, Anchor Down) that opened last fall to much excitement, and for good reason.

Related The Press is the latest restaurant from Mule, Anchor Down owners

The Press is the latest restaurant from Mule, Anchor Down owners
Opening in early October, The Press is the latest restaurant from Hungry Town Concepts.
By Jacob Threadgill
Food Features
Billed as Southwestern comfort food, the menu was devised by consulting chef Beth Ann Lyon — who is a champion of mindfully sourced products — and it is the perfect blend of comforting heavy meals and nutritious clean eating.

The 4,400-square-foot building — a former printing press and garage — has been expertly renovated with beautiful wood, lights and an inviting atmosphere that includes two bars and an outdoor patio currently under construction that will be open in May.

“The reception has been great so far,” Morris said. “I still think we can grow business quite a bit, and there is room for us to grow with the space that we have.”

With dishes like Lyon’s chicken-fried rib-eye steak, which she used to advance out of the first round on Food Network’s Guy’s Grocery Games, The Press’ menu is a reflection of Oklahoma food in the 21st century.

So much so that The Press offers the official state dinner every Tuesday after 4 p.m. for $40. The meal consisting of barbecued pork, chicken-fried steak, fried okra, squash, corn, sausage gravy, strawberries, black-eyed peas and pecan pie was adopted by the state Legislature in 1988. Morris said the kitchen prepares enough to serve about 10 meals every Tuesday.

“Some people finish with two people, and I’m always impressed,” Morris said. “Some people will come as a big group, like 10 or 15 people, and they will get it to start, so it’s almost like Oklahoman antipasto or a sampler platter.”

My first visit to The Press resulted in a severe case of plate envy. I had trouble deciding what to get. Should I go with the popular chicken-fried steak? What about the mashed potato bowl, which is essentially a high-end version of the KFC Famous Bowl?

After I put in my order for a veggie burger, I saw a customer order the bone-in fried chicken that utilized a honey Buffalo dunk, and it reminded me of my favorite fried chicken restaurant in Memphis: Uncle Lou’s, which finishes the bird in a sweet and spicy sauce.

Envious as I might be, I was pleasantly surprised to find The Press’ veggie burger uses the much-hyped Beyond Burger patty. I followed Beyond Meat’s journey to create a replica beef burger using soy and pea protein for years. It was released to Whole Foods last year, but I have yet to try it.

The Press tops the burger with avocado, feta cheese, caramelized onions, pickles, red bell peppers, arugula and vegan mayonnaise. The patty really does mimic the texture of a beef burger, and especially after getting grilled on the flattop, it possesses the smokiness that a traditional black bean or chickpea patty can’t provide.

At $10, I’m not sure The Press is turning much of a profit with each sale. Morris said the Beyond Burger costs about $3 per patty.

“It would be cheaper to make our own,” he said. “It’s part of our company motto. We don’t want to be the place that you splurge on; we want to be a place that you can eat at five days a week and not break the bank.”

The most expensive item on the menu is the chicken-fried rib-eye ($15), but The Press is using a much higher quality cut of meat than you normally see for that dish. 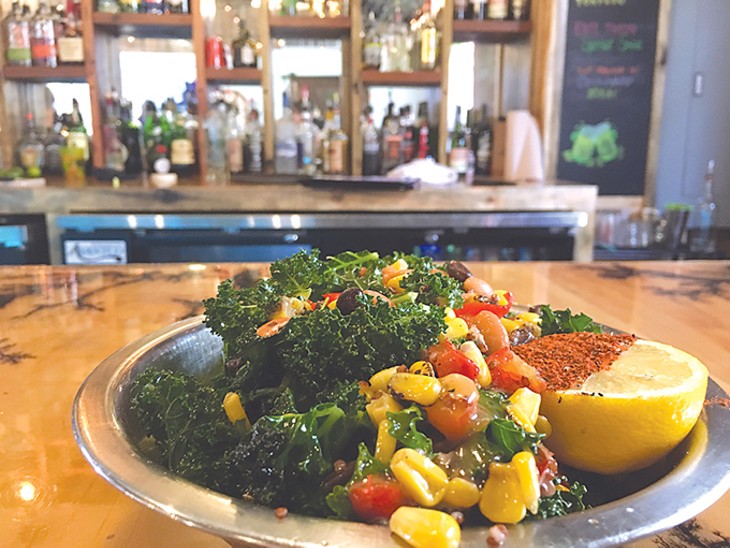 A second visit to The Press did little to ease my indecisiveness because everything on the menu is appealing. I ordered the beans and greens ($8) and the barbecue version of its popular Buffalo chicken mac ($11) to get a taste of each end of the spectrum.

Coming out first was the massaged kale salad. If you’ve been burned by a tough, bitter and chewy kale salad in the past, give this one a chance. By hand-massaging the kale, you can break down its fibers while still retaining all of its nutrition. It’s joined by quinoa, black and pinot beans and its house dressing, and the salad is sweet and savory. I kept returning to finish it even as the macaroni and cheese came out.

Morris said the Buffalo macaroni and cheese has rivaled the chicken-fried rib-eye for most popular items. Radiatori pasta is covered in a creamy cheese sauce and topped with chicken strips topped in either Buffalo or barbecue sauce with green onions, blue cheese and ranch.

It was perfectly comforting, although I was hoping for a more intense cheddar flavor in the mac. I think the Buffalo sauce complements the cheese a little better than the sweet barbecue sauce, but it was plenty tasty in its own right.

After much anticipation, I was pleased to see that The Press is deftly offering contemporary spins on Oklahoma classics with plenty of nutritious options sprinkled in between. The Press only helps strengthen the 16th Street Plaza District’s healthy restaurant scene.