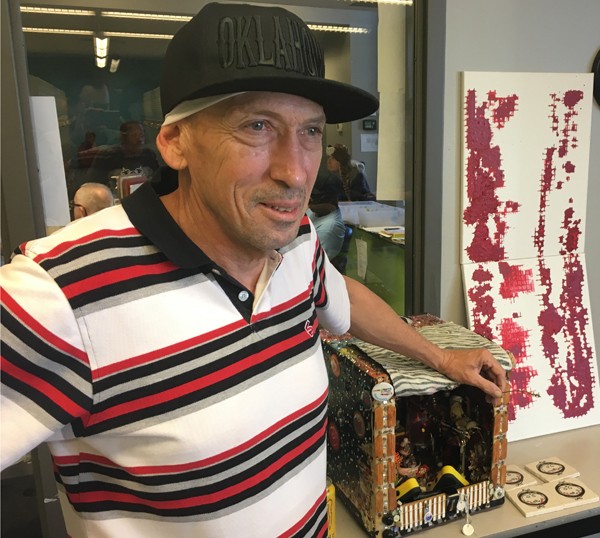 After her mother died, Oklahoma City native Lee Jones’ life spiraled out of control. She lost her best friend and confidant, and with nowhere left to turn, she eventually found herself homeless.

Curled up outside in the winter, surrounded by a few heaters that did little to stave off the oncoming cold, Jones clenched a piece of lace that belonged to her mother and hoped things would get better.

Her lifeline came through Homeless Alliance, a nonprofit organization that partners with agencies to aid the homeless population, which the organization estimates affects 5,400-6,800 people annually in Oklahoma City.

Homeless Alliance provided Jones with essentials like blankets, shampoo and access to warm meals, but it also gave her a creative escape.

Twice a week, the alliance opens the doors of its WestTown Day Shelter for the Fresh stART program. The program is modeled after Austin’s Art from the Street and invites volunteer artists to act as guides for homeless individuals who can use art as an escape but also a means to improve their lives.

In 2017, Fresh stART artists will have their work on display for sale at seven public galleries. Their works will be available at The Underground, a coffee shop in Midwest City, the entire month of November.

One of the works on display is a blue-and-gold acrylic piece inspired by the pattern of Jones’ mother’s lace that kept her company at rock bottom.

“Art class brings me peace and joy,” Jones said, noting that her mother paid for a few art classes when she was a teenager. “I had to stop painting because I had to take care of my kids and my mom, but then [my boyfriend] Rocky brought me to art class. I can talk to anyone here, and there are so many happy moments.”

Two years into the program, Jones said that she has sold six pieces of art, including her very first one created in the studio. She’s now living in a house with her boyfriend Rocky Sumter and has a job.

“I’m doing so much better personally,” Jones said as she put the finishing touches on a bright red dragon. “I love it here and all of the people I’ve met. I originally learned to paint using oil; now I’m learning with acrylics.” 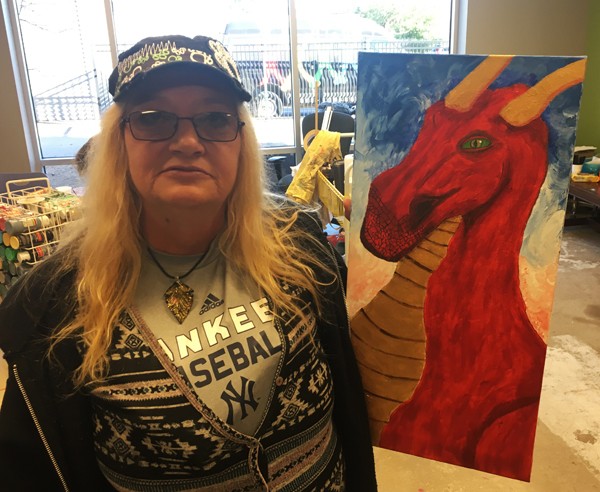 The volunteers don’t teach classes; they make their own art and serve as guides for the program participants. The alliance provides starter essentials for the program, collected through donations. After they begin to make sales, they can buy more supplies.

Unlike his girlfriend, Sumter had no background in art. He found the alliance and began sweeping the room that houses Fresh stART when he was invited to join.

Last year, Sumter said he sold over $1500 worth of his art at three shows.

“I thought it was pretty cool when I sold my first piece, but it didn’t really sink in until an art teacher told me that all I had to do was to sell one piece to consider myself a known artist,” Sumter said.

Sumter has used the funds from his art as a supplement with another job to find housing for he and his girlfriend. A house means he has his own studio and a jolt of creativity.

“I started doing art that I couldn’t do on the streets,” Sumter said. “I get a lot more done. The hardest part is keeping it clean. It’s clean right now, but I can’t wait to sling some paint around.”

Homeless Alliance deputy director Kim Woods said Sumter is one of the program’s most talented painters but he has begun to work with mixed media, like a shimmering jewel box, which he said was inspired by God to create art with found materials.

The box is filled with donated earrings, springs and watch pieces and transforms when he turns on lights and pumps in music from Bluetooth speakers that he installed into the box.

“My name is Rocky, and we’ve decorated our house in a rock ’n’ roll style,” Sumter said. “I’m not too much into country music. It’s too depressing; I like my life to be upbeat.”

The Fresh stART program began in 2012 and hosted approximately 150 people last year. At an art show in June, 52 pieces of artwork were sold. The artists get to keep 80 percent of the proceeds while the remainder goes back to the program to fund supplies.

The Homeless Alliance day shelter serves an average of 300 people per day where they have access to breakfast and lunch, warm showers and computers.

The alliance also houses a shelter for pets, which often serve as vital protection for the homeless, Woods said. In addition to operating the 35,000-square-foot campus, which includes apartments for the chronically homeless and veterans, the alliance publishes The Curbside Chronicle.

Woods said the Fresh stART program stands out from the variety of services provided at the alliance because it is therapeutic while providing a creative outlet and a new source of income.

“All these people are in here doing art; that’s a few hours two days a week where they’re not doing something else on the streets,” Sumter said. “You’re in an environment where you’re not tempted to do wrong.”