After an extensive renovation, a hotel on Northwest Expressway reopens under new ownership. 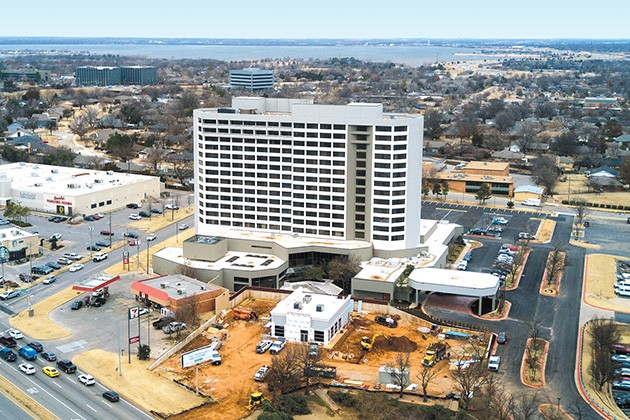 After taking the building down to steel and concrete and undergoing a massive renovation, a former Marriott hotel is reopening as Embassy Suites. New signage went up last week, and the hotel is set to open Thursday or Friday at 3233 Northwest Expressway.

“Oklahoma City’s growing economy provides the perfect opportunity to expand our already-strong brand footprint in the market,” said Alan Roberts, global head of Embassy Suites by Hilton, in a statement. “Business and leisure travelers will find all the core attributes they know and love at this new location, from our spacious suites to the free made-to-order breakfast, and everything in between.”

The former Marriott Northwest opened in 1985 and remained highly active through the ’90s until a hotel surge in central Oklahoma led to a decline in occupancy.

“You won’t really recognize any of that when you walk into the building,” Tammy McDaniel, director of sales and marketing, told Oklahoma Gazette. “There’s a lot excitement about the building coming back online.”

Now with $20 million in renovations for an extensive remodel inside and out, Embassy Suites hopes to meet a niche in the market.

“This was an iconic hotel on the northwest corridor when it was a Marriott, and the location is great because of the accessibility and convenience. It’s easy to get to from all points in Oklahoma City,” she said. “To have a facility that has the banquet space that we offer — there are very few hotels in Oklahoma City that can do a sit-down dinner for 500-plus, and in our ballroom, we can do over 800.”

The former Russell’s Lounge, one of the city’s longest running bars and clubs, which closed permanently in 2018, was demolished.

“Of course the famous Russell’s that everyone talks about from the Marriott days is gone, and part of it is now a fireside patio, which is about 4,100 square feet,” McDaniel said. “On the other side of the patio wall, that land that belonged to us was sold to McAlister’s, and a McAlister’s Deli is being built in front of the hotel.”

McAlister’s Deli will face Northwest Expressway and is expected to open early next year.

The hotel’s former step-down lobby has been opened up and leveled out with new marble flooring, new woodwork, furniture and lighting, creating what McDaniel calls an inviting atmosphere.

The Marriott had an indoor/outdoor pool, but Embassy Suites only kept the indoor pool, which will have heating capabilities. The outdoor pool was taken out and made into a sundeck.

The hotel has roughly 23,000 square feet of meeting space on the first and second floors as boardrooms, breakout rooms, private dining and a hospitality suite. The grand ballroom can hold up to 1,200 people. An array of catering options will also be available.

The hotel will also have a bar and a restaurant.

“The bar is an expansive build-out and very modern,” McDaniel said. “[The restaurant] will be open in the evenings from 5 to 11. It’s called The Local Kitchen and Tap, and it will have a classic menu with kind of a modern twist.”

Other amenities include 24-hour Pavilion Pantry Market, a business center and a fitness center. Each of the 216 suites, which are available as traditional upscale studios and two-room suites, is equipped with complimentary Wi-Fi, a living area, coffeemaker, microwave, mini refrigerator and 55-inch HDTVs with movies for guests to stay entertained.

“Embassy is known for its three pillars … which are two-room suites, free made-to-order breakfast and complimentary appetizers and drinks in the evening,” McDaniel said. “The breakfast is very extensive. There’s a large space dedicated to the breakfast area on the third floor." 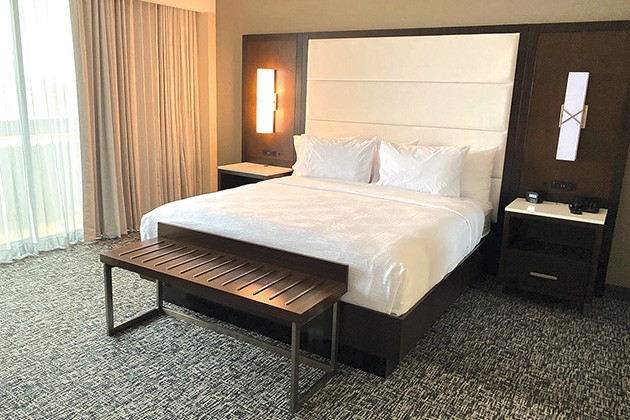 The building’s facade has a fresh coat of paint with a white-and-gray scheme and a large parking area that has been repaved. The property also had new landscaping installed.

“The Northwest Expressway Business District is flourishing economically, and it has more to offer than ever before,” Patrick Whyatt, general manager, said in a statement. “Whether guests are coming for business or to explore leisure attractions like the Lake Hefner Recreation Area, our hotel provides versatile offerings to accommodate every traveler.”

The hotel’s website is live, and guests can already make reservations. Rates start at around $100 per night.

“The other thing about the hotel is we have rooms with balconies, and so it’s a nice feature. The views are amazing because you either have the view of downtown and the Capitol and you can see really as far away, on a clear day, as Norman. Then on the north side, you have the Lake Hefner view. Every room has a view,” McDaniel said. “Hopefully some people will take advantage of booking New Year’s Eve just to come and experience the hotel and see for themselves what the hotel is about and just the detail that has been put into the hotel.”