Jane Austen’s Christmas Cracker encourages the audience to step into Austen’s world and celebrate the season with friends. 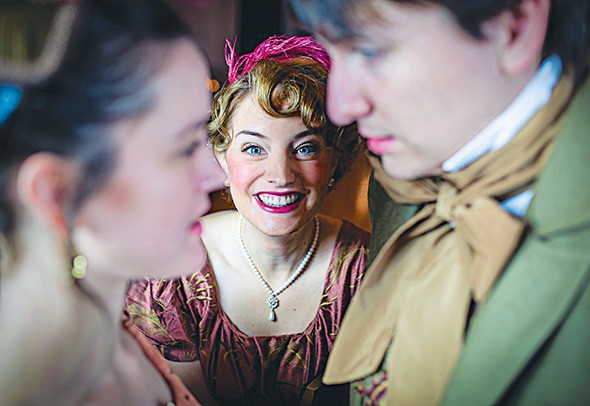 According to BBC America, “a cracker is a three-chambered cardboard tube wrapped in brightly colored paper that is twisted to connect the two outer chambers to the middle. Running through the middle is a cardboard strip with a tiny (and I mean really tiny) explosive charge on it so that if you take one of the outer chambers in your hand and someone else takes the other outer chamber, you can have a small tug-of-war until the cracker breaks and the explosive makes a mild bang. But that’s not the end of the fun, oh no sirree Bob. Inside the center chamber is a world of delights.”

Jane Austen’s Christmas Cracker — running Dec. 5-21 at Shakespeare on the Paseo, 2920 Paseo St. — is similarly designed to combine a number of holiday-themed delights into a single pleasing package. Director Tyler Woods calls the production — which combines elements of traditional theater with interactive improv, holiday music, dancing and snacks — “a Christmas treat,” which Oklahoma Shakespeare hopes will become a holiday tradition in OKC alongside Oklahoma City Ballet’s The Nutcracker and Lyric Theatre’s A Christmas Carol.

“It’s hilarious; it’s a hoot; it’s a different play in so many ways,” Tyler Woods said.

Playwright Erin Woods, seeking inspiration from someone not named Charles Dickens or Pyotr Ilyich Tchaikovsky, based the play on Austen’s novels and letters.

“We wanted something that would fit into the mix of those traditional holiday events,” Erin Woods said, “but it would be something that no one had ever seen or participated in before, meaning that it didn’t have to do with Dickens or A Christmas Carol and it didn’t have to do with the ballet and The Nutcracker. It was a completely new type of story, but it still had that old-world feel.”

The play was last staged in 2016, but Erin Woods said she rewrites the script every year it’s performed.

“It’s the same overall premise,” Erin Woods said. “Jane Austen and her sister Cassandra Austen are giving a ball, and the guests are both the audience and some of Jane Austen’s beloved fictitious characters — but we change who those characters are and the storylines that we sort of play out throughout the night. … People who have seen the show before may recognize that we do a little bit of Pride and Prejudice every time, just because that’s an audience favorite and universally known, but this time … some of the characters from Emma show up and some of the characters from Northanger Abbey. Those are the three novels that we are concentrating on. Now, we don’t tell the whole story because there isn’t time, but we do have some scenes directly from those books and stories.”

Christmas is mentioned in all six of Austen’s novels, but the holiday during the author’s lifetime (1775-1817) wasn’t celebrated in quite the same way. Christmas trees didn’t become popular until after Queen Victoria’s husband Prince Albert brought the tradition from his native Germany to Windsor Castle in 1841, and Dickens’ A Christmas Carol, published in 1843, helped codify the “Christmas that we know today as the jolliest, most sentimental time of the year,” Erin Woods said.

“I recognized there’s a lot of
humanity in her writing.”
—Erin Woods tweet this

“It would be a time to have friends over and play parlor games, to sing songs, to have a dance,” Erin Woods said, “but … obviously there’s no great shopping that’s done. This is pre-Scrooge, -Dickens era, so there’s not that idea of redemption and the idea of Christmas as this hugely holy holiday. It’s more of a social time for the Austens to get together with friends. … We’re throwing a party, and we’re dancing and we’re snapping crackers and doing all the fun stuff.”

Holiday celebrations may have been low-key during Austen’s lifetime, but Jane Austen’s Christmas Cracker requires its actors to learn Regency-era dances, Christmas carols and parlor games well enough to teach them to audience members and know Austen’s characters well enough to “converse very fluidly” outside of the script or even the scope of the books they star in.

“If you go up to Mr. Darcy and you ask him a question about Emma Woodhouse, then he’ll be able to answer you intelligently,” said Tyler Woods, referencing characters from Pride and Prejudice and Emma, respectively. “Some actors are used to doing improv, but they’re used to doing either an improv play or a scripted play, but to do both kind of all of it at once presents some unique challenges.”

Though actors have to be familiar with Austen’s works, audience members don’t necessarily need to be. For Austen fans, who often come in costume, the production can be something like a comic book convention offering a chance to meet and take photos with favorite characters, but Erin Woods said the sometimes skeptical “tagalongs” that these fans bring with them are often pleasantly surprised by the “super likeable and super accessible” experience. The playwright was similarly surprised by Austen’s work, which Erin Woods didn’t begin reading until her mid-20s because she’d been convinced in high school that “Jane Austen was pretty frivolous and pretty much rolling-of-the-eyes romantic-comedy kind of stuff.”

“When I actually sat down and read Pride and Prejudice and Northanger Abbey,” Erin Woods said, “what I found was that the writing was something really special because it was very recognizable. It was the drama of everyday life and everyday living. Even though it was at a time period far removed from myself, I recognized my friends; I recognized my family; I recognized there’s a lot of humanity in her writing. It’s pretty terrific. … Ever since then, I’ve been sort of a huge Jane Austen fanatic.”

Her husband Tyler Woods — who was originally introduced to Austen’s work when he played Mr. Darcy in his wife’s adaptation of Pride and Prejudice — said that men sometimes approach the author reluctantly. 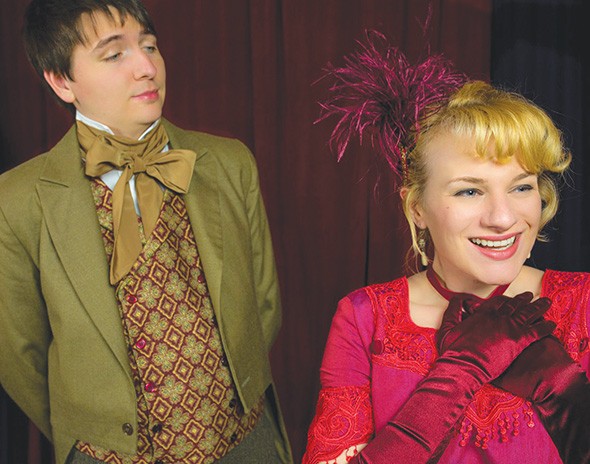 “At first glance, men don’t think that they’re going to be interested in Jane Austen,” Tyler Woods said. “And then they’re exposed to it, whether it’s by a movie or a play or reading a novel, and they figure out that Jane Austen wrote incredible love stories with compelling characters, both male and female. Her men are really full of depth and intricacy. … You have these compelling stories that are just told in such a way that they’re timeless. In many ways, it’s like Shakespeare. Shakespeare is 400 years old; Jane Austen is 200 years old, but they both hold such relevance to today with their stories.”

Jane Austen’s Christmas Cracker can serve as “a lighthearted and fun introduction” to these stories.

“You get to learn a new dance — and the dances are really fun, and you don’t have to dance if you don’t want to,” Tyler Woods said. “You sing Christmas carols; there’s food; we have ice cream and treats and so forth. … There’s things to eat; there’s things to do, so it’s sort of like you can’t lose. There’s something for everyone, really.”