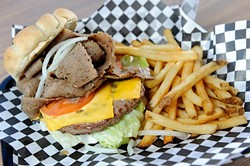 Hedonism, thy name is Gyro Burger. If you look hard enough, there are a few things on the menu at Cal’s Chicago Style Eatery, 7202 W. Hefner Road, that are probably healthy — salads, perhaps, or the grilled chicken sandwich.

Whatever you call it, Chicago is definitely a city. And like several cities, it has a cuisine all its own.

Specifically, Chicago likes meat. Lots and lots of meat. Which is why the gyro burger ($8) makes so much sense. See, it’s a third-pound cheeseburger topped with gyro meat and tzatziki sauce.

It’s the same reason you climb Mount Everest: Because it tastes good. Another “thing on top of a thing” burger is the Philly burger ($10), which puts thinly shaved beef, Swiss cheese, onions, peppers and mushrooms on top of a burger. It’s more than you need and just what you want, which should probably be the motto at Cal’s.

Bigger isn’t always better, but bigger and better is better. And bigger. (Is it possible English is my second language?) Cal’s does good food big because you’re supposed to walk out stuffed.

Few dishes make me happier than the Italian beef sandwich ($8), which is the first dish I sought out when I went to Chicago. It’s simple and amazing: a soft hoagie roll stuffed full of shaved roast beef topped with peppers (hot or sweet, but you should get the hot) and dipped whole into a vat of flavorful broth called gravy. It’s a big, messy, wet, delicious beast, and I want one right now.

(For $1 more, you can get the Italian beef and sausage, which — you guessed it — includes Italian sausage.)

One of the best deals on the menu is the Chicago dog ($4), which is a big beef frank with neon green relish, sport peppers, a dill pickle and mustard on a poppy seed bun. Sport peppers will not make you good at sports, but they are crunchy and a little spicy and utterly wonderful. Hot dogs without sport peppers live lives of quiet desperation because they will never truly be loved.

Have you ever eaten french fries and thought, “I wish these were pickles”? Lucky you; Cal’s sells pickle fries ($4). They’re shaped like fries. They crunch like fries. They taste like pickles and fries that moved to a more progressive state, opened an antique store, let their passions run wild and raised a family together. You can taste that passion in every bite, unless you dip them in ranch dressing, which is also a valid life choice.

Fun fact: In order to get my son to eat anything, for about a year, we had to tell him it was meatballs — cut-up chicken breast, hamburgers, vegetables; all meatballs.

So it was kind of a relief that he liked actual meatballs from the meatball sub ($7). Not quite as messy as the Italian beef or the gyro burgers, this is still not a great sandwich to eat while wearing a wedding dress. It’s covered in marinara made from the All-American Pizza recipe (the owner of AAP is Cal’s father-in-law) and mozzarella and Parmesan cheese, so it’s hot and delicious and I might still have a little of it in my beard ... ladies.

Aside from the food (and the soundtrack, which featured a lot of Taylor Swift and Katy Perry), the best reason to visit Cal’s Eatery is Cal. His accent alone would be wonderful, but he’s also ridiculously friendly. The dining room is an upgrade from Steve’s Rib, which previously occupied the space, with big, cushioned booths and a clean, well-lit atmosphere.

There’s no deep-dish pizza at Cal’s. There are, however, giant portions of delicious meats and cheeses and peppers forced against their will into bread products. And for that, I am thankful.

What works: Italian beef sandwiches, pickle fries and Chicago dogs. What needs work: You will need a new belt. Tips: Pickle fries are big enough to share, but you won’t want to.