The one constant throughout Murphy’s career has been his faith. Murphy and his wife Linda founded the nonprofit Mission OKC 25 years ago, but its efforts went on the backburner as Enviro Clean grew from bedroom operation into the Southwest’s largest oil remediation company.

After the 2013 sale of Enviro Clean, Murphy transitioned into something completely different: coffee. 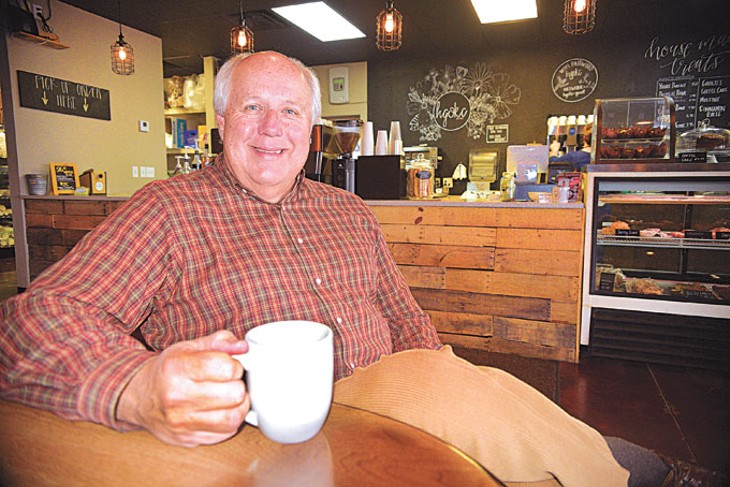 “Coffee is the unifying thing,” Murphy said seated in the warm retail space surrounded by wood and a roaring fireplace. “I’ve attended church in the community for 30-plus years, and as a church, you’re always trying to reach out into the community, but it rarely happens that way. There are a lot of reasons in a person’s life that they will not respond to a church, but our goal as a business is to show the love of Christ to the community. We’re not trying to be a church or push people to a church.”

Higher Grounds orders coffee beans from all over the world, and they arrive green to Hoboken Coffee Roasters in Guthrie, where they are roasted every Wednesday and packaged for delivery. Higher Grounds’ blends are available in the store and distributed to businesses and churches on the for-profit side of the business.

Higher Grounds Coffee Shoppe is the headquarters of Mission OKC’s local projects, which in the past few years have included building a basketball court and numerous fundraisers for Rollingwood Elementary.

The shop’s event space and reading room are free to rent, and serve as a meeting place for Bible study groups, games of Bunco and even a group that dances to traditional Jewish music every few weeks.

“We want to be a place where people are comfortable,” Murphy said. “Some people feel so much so that they come in and try to turn the fireplace on by themselves.”

The food service at Higher Grounds Coffee Shoppe has taken different iterations since opening. Originally, it served full breakfast and lunch menus and worked with a program to employ women out of prison in the kitchen, to teach them a trade.

“The recidivism rate for women in Oklahoma to return to prison is something like 85 percent, but we had seven ladies who did a great job for us, and not a single woman has gone back [to prison],” Murphy said.

The program that sponsored the women ran out of money following a downturn in the oil market, Murphy said, and in the meantime, the coffee shop has ended full breakfast and lunch menus.

Head baker Dawn Kellogg and the staff churn out a variety of pies, turnovers, cookies and other sweet treats, all of which can be topped with Roxy’s Ice Cream.

Mission OKC uses proceeds generated from Higher Grounds to fund missionary efforts in Haiti, Peru and Nepal, in addition to its local projects.

When it was founded, Mission OKC established an outreach for Section 8 housing, opening a church inside Lakeside Village Apartments, which ran for 10 years.

Murphy said that the staff doesn’t go out of its way to discuss their Christian faith with customers unless they feel compelled to do so. He was reminded of a time when head barista Tori Goben was working the drive-thru window when a woman asked to pay for the order of the person behind her.

Goben told the lady that she sensed it was more than an altruistic expression and asked the woman if she was O.K.

“The woman said that she was on her way to her first chemotherapy treatment and that if she couldn’t have a good day, then the next person should. The next thing you know, Tori is leaning out the window, praying with the lady,” Murphy said. “Little things are happening like that all time.”

After decades working with geologists, lawyers and rig workers, Murphy said he is enjoying working and listening to the staff at the Higher Grounds.

“I have found myself sitting at tables I wouldn’t have been sitting with in the past. I’ve met some really good people,” he said. “We might view life from different sides, but our desire to love life is the same.”