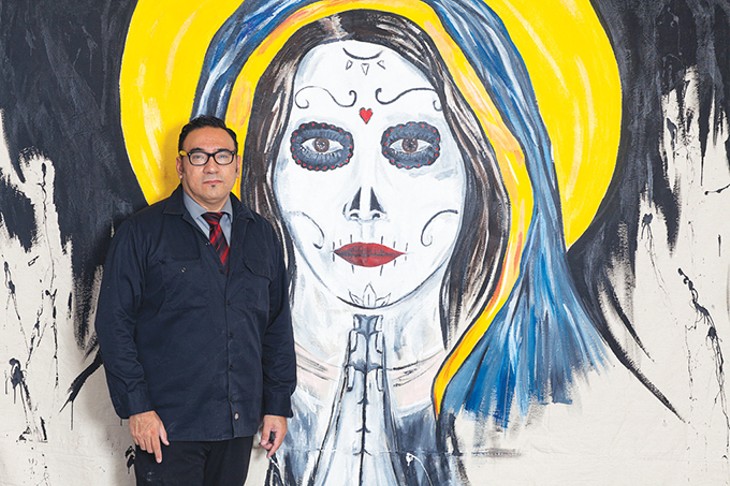 After a brief period of relative inactivity, Inclusion in Art reemerged earlier this year with CHROMA: Artists of Color, an art exhibition exclusively featuring local artists of color.

Narciso Argüelles, executive director of the nonprofit that advocates for diverse rational and cultural representation in Oklahoma’s art scene, believes the January and February CHK|Central Boathouse-held art exhibit was a first of its kind in the state.

“I can’t think of another show that was specifically beginning, mid-career and professional artists that was all-inclusive like that and that was also edgy artists,” he said in a recent Oklahoma Gazette interview.

CHROMA was a joint venture with the newly formed Oklahoma Latino Cultural Center. The exhibit, now closed, was intended as the reverse of racial tokenism, which, intentionally done or not, is a problem in the state arts scene that some minority artists have occasionally pointed out.

“There is a perception that a token artist would be selected in exhibits to give an appearance of diversity,” Argüelles said. “And artists have fought against it.”

The exhibit fit nicely into Inclusion in Art’s overarching goal, which is to provide opportunities for artists of color in the state. Inclusion in Art’s next planned exhibition is ¡Viva Sabor!, a collaboration with the Hispanic Chamber of Commerce that, in addition to art, features wines, tequilas, cocktails and signature foods from a variety of restaurants in the metro area. The event is June 15 at Tower Theatre, 425 NW 23rd St. Admission is $45-$100.

Argüelles said it is not that the local art community is actively working against black, Latino and other minority artists, but that it is often not consciously promoting diversity.

“The lack of diversity is very apparent if you go to any art show anywhere in Oklahoma,” he said.

Growing up in Mexico near its border with California, Argüelles was constantly surrounded by the vibrant colors of traditional Chicano art.

“Go down to any rural town or big city like Tijuana,” he said. “Arts and crafts are evident, but also just folk art in general.”

The innovative nature of these works was apparent to Argüelles, even at a young age. These indigenous artists were untrained but able to create such beautiful works.

“I was really struck by the ingenuity of people with not a whole lot of funds,” he said. “It’s like, ‘OK, what can we do? How can we construct this?’ They figure stuff out.”

Argüelles, a current art teacher at Deer Creek High School, started his art career when he began attending University of California San Diego for undergraduate studies. The school had several highly regarded artists in its faculty, including world-renowned fiber artist Faith Ringgold. Argüelles made it a point to take every class Ringgold offered, soaking in as much knowledge as he could.

Through the school, Argüelles was introduced to the Border Art Workshop, an international organization that had a large impact on his life. The cooperative artist collective between neighboring cities San Diego and Tijuana snagged major headlines and was invited to some of the biggest international shows, including the prestigious Art Biennale in Venice, Italy. With the group, he got to travel the world displaying his art while still in his 20s.

About 10 years ago, Argüelles left his teaching jobs in California and moved to Oklahoma through a service opportunity with his church. During his first few months in the state, he was taken aback by how little cultural representation there was, not only in the art community but in all facets of life.

“Living in San Diego and Los Angeles, Chicano and Latino cultural centers were just the norm,” he said. “There were plenty of Latino artists, very political Chicano groups fighting against anti-immigration policy and racism. When I moved here, I didn’t see anyone really being a leader in that area.”

When Argüelles told people in Oklahoma that he was Chicano, they frequently asked him to explain what that meant — something he was not used to explaining growing up in close proximity to the border. At first, the lack of cultural familiarity was uncomfortable, but soon, Argüelles saw an opportunity to make an impact and decided to set roots in the state.

“One of the reasons I decided to stay,” Argüelles said, “was that I was like, ‘You know what? There’s a chance for me to do something here that’s really important culturally. What if I’m that guy that starts people taking that part of the community seriously?’”

Argüelles said the city’s cultural sensitivity has improved greatly in the last 10 years, but he still gets subtle and sometimes not so subtle racial barbs thrown his way from time to time. Inclusion in Art is the way he chooses to combat those attitudes.

Inclusion in Art will occasionally reach out to art events and exhibitions in which the group believes racial inclusion could have been better. The problem, Argüelles said, often stems from a show’s open-call or application process.

Argüelles believes many art shows are not advertised or promoted as thoroughly as galleries and curators feel they are. Something might be plastered all over Facebook and Snapchat, but are the flyers also made in Spanish-language versions? Inclusion in Art would like to see more active attempts to reach minority communities on platforms more catered to them.

Even art exhibits with a blind selection process can be inadvertently exclusive through their deadlines and digital application requirements.

“The access for the dominant culture to things, historically, is greater,” he said. “Even something as simple as electronics.”

While Argüelles would like it if organizations took the initiative to come to Inclusion in Art and ask about how to promote diversity in art representation, the reality is that few ever do. The organization has to be proactive in its avocation because the problem is not one that will fix itself.

“We can wait for them to get that lightbulb moment,” he said.

While there is still room for improvement, Argüelles said the city’s art community has become much more accepting within the last decade. There are also a lot more local art opportunities in general.

“People talk about how open it is to do stuff now, but think about how it was 10 years ago,” Argüelles said. “There was, like, nothing.”

There are many art galleries, organizations and power players in OKC that believe in diverse representation. Argüelles said the challenge is pushing the issue of representation to the forefront of people’s minds and getting them to think about race in areas where they might not even know to consider it.

“I understand that they have an organization to run or an exhibit to plan,” he said. “They’re doing that and they don’t see it as their responsibility, which I completely understand. This is why Inclusion in Art exits.”

Argüelles and Inclusion in Art want to be seen as an asset for the local art community to call upon at any time. Sometimes well-intended efforts for inclusion can come across as tone-deaf when a minority voice is not involved in the planning efforts. Argüelles said this can be avoided with just a simple call.

“Include [people] rather than market to them,” he said. “We’re begging for people to ask us stuff.”