After the sixth sample Fusion Kitchen owner Rupal Patel handed us to try, I whispered to my friend that we might not have enough room left for dinner.

This is how Rupal and his wife Ruhi Patel welcome every new guest.

Fusion Kitchen, 1100 S. Air Depot Blvd., in Midwest City feels like home, even though my home never had Indian food in it when I was growing up. There are touches of the Patels’ life everywhere in the eatery, from Hindu prayer flags on the door to a chess set (like the one their son Advait, Oklahoma Scholastic Chess Organization’s ninth-grade champion, plays on) by the window.

The Patels, like parents everywhere, have their playful schtick. It’s banter that comes from years of working, living and growing a family together. The way they care for each other is reflected in the way they care for customers. Everyone is treated like an old friend.

The best way to treat old friends and make new ones is with great food. The concept at Fusion Kitchen is an interesting one. A large portion of the menu is homestyle Indian food, but there are also sandwiches, tacos and vegetarian sloppy Joes, plus whatever specials Ruhi creates for the day.

But her greatest feat is coming up with four new curries daily from a variety of ingredients. Generally, there are a couple with meat and a couple of vegetarian options. Choosing among them would likely be torture, except Fusion Kitchen gladly serves up mixed plates ($5.99 small, $8.99 large) with rice and naan.

Ruhi takes special pride in the restaurant’s healthy food. The curries all have a vibrant color, but they’re missing a bit of the sheen that comes with using too much cooking oil. Not only are they lower in calories, but the curries sit easier in the stomach. Fusion Kitchen is ideal for those who fear Indian food will be too spicy or give them indigestion.

A chicken curry is almost always on the menu, which is a great choice for beginners. The slow-cooked chicken pieces have a lovely texture with just a little chew, and the sauce keeps everything moist. 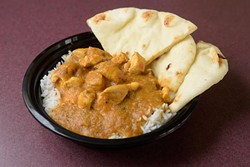 Every restaurant uses a different blend of spices for its curry, but you can generally count on cumin, coriander, chili powder and turmeric. Because Ruhi is constantly creating new combinations, Fusion Kitchen’s stews are always a welcome surprise.

Another newcomer-friendly dish is a tikka sandwich ($5.99 small, $8.99 large). Tikka is a Hindi word for spice-marinated pieces of meat or vegetables. The sandwich includes chunks of baked, marinated chicken mixed with spices, cilantro and mayonnaise under melted cheese in a house-made hoagie bread. If you’re looking for heat, look elsewhere. Instead, enjoy how the mellow flavors blend together and the delightfully squishy texture of the sandwich.

Looking for something small? I enjoyed the vegetarian house special slider ($1.75) but wished it had a little more flavor. The little sandwich features a quasi-samosa — a ball of seasoned potato dipped in chickpea flour and fried — in the middle. Perhaps it was just in comparison to the spice-heavy curries, but the special slider seemed a little bland, even with a bit of chutney on top. If I get it again, the sandwich might be better with some hot sauce.

Speaking of samosas (two for $3.99), Fusion Kitchen makes a lovely version with a nice heat spike that starts poking your nerves a few bites in. The fried puff pastry shell is stuffed with potatoes and peas and comes to the table with a pale golden shell that needs a minute to cool down before it’s ready to be devoured.

Once it hits the right temperature, a samosa is the perfect handheld snack, like a spicy, starchy Fuji apple. It’s wonderful dipped in chutney, an Indian condiment. Fusion Kitchen has two on the menu. One is a green chutney with a lot of fresh, cooling flavors, and the other is sweet and sour, which is more spicy. Both are 99 cents.

As the father of two young children, I am keenly aware of how difficult it is to get them to try new foods. So if your little ones aren’t terribly adventurous eaters but you still want Indian food, consider Fusion Kitchen’s mac-and-cheese melt. A ham sandwich with creamy macaroni and cheese inside is just novel and messy enough to intrigue them, but familiar enough that they’ll eat the whole thing.

While it’s generally smart get tacos from Mexican restaurants, make an exception for a very different kind of taco at Fusion Kitchen. Wrapped in naan and paired with a curry-flavored slaw, the fish taco ($7.99) is stuffed with a giant piece of baked tilapia. The crunch of the slaw juxtaposes nicely against the moist fish and the chewy naan. It won’t replace fajitas in your heart, but it’s a tasty dish nonetheless.

Do not leave without trying the lassi ($2.49). The cool yogurt drink is the best antidote if a spicy dish overwhelms the taste buds. Mango is the best, but the rose-flavored lassi is a nice change of pace.

The food at Fusion Kitchen is enough to draw anybody back for more, but it’s the welcoming nature of the Patels that really puts the restaurant over the top. At this time of year, it’s always nice to find another place that feels like home.