“We can keep our creativity here, and so that’s what I was pushing with them to let them know that can happen,” he said. “That’s what this show represents.” 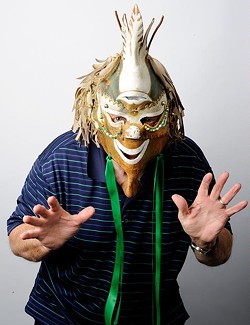 His works reside in the collections of Lady Gaga, the state capitol and Oklahoma Supreme Court. His masks have been used in productions at the John F. Kennedy Center for the Performing Arts in Washington, D.C.

Riley wasn’t always a maskmaker. He earned his master’s degree in art education from the University of Oklahoma in 1971, graduating as a silversmith and painter. As his career advanced, it became obvious that he would not become well-known as a painter. There was too much competition.

He worked on a few leather masks in the 1960s before getting caught up in the back-to-the-land movement. Riley created sculptures using animal shells and bones, and his work became popular within that counterculture. Captivated by the psychology of human expression, he began making sculptures that resembled faces.

“A face is fascinating to study,” he said. “If you look at the face, you can usually tell what somebody is about.”

The study soon brought him back to his mask work, and his early pieces were well-received. Riley’s reputation as a maskmaker flourished after he was invited to exhibit his creations at Fairtree Gallery in New York City.

In the late ’80s, the Kennedy Center asked to display his work. While there, he collaborated with an African dance company to develop masks for a production at the venue.

“It changed my career,” he said. “When I came back to Oklahoma, everyone wanted me to make masks.”

Another notable moment in Riley’s career came in 2010, when the Ford Center (now Chesapeake Energy Arena) commissioned one as a gift for pop icon Lady Gaga. Ford Center management asked Riley to create something Gaga could wear onstage, so he designed several concepts for them to choose from.

He said it was unfortunate that she could not be involved in the creative process.

“I would have loved to hang out with her, but they gave it to her,” he said. “My job was to build it.”

Riley worked as an art educator at John Marshall High School before he developed his maskmaking skills.

“In Oklahoma, most schools didn’t teach the arts in 1964, just the urban areas,” he said.

Arts education and leadership blossomed after Oklahoma Arts Council was founded in 1965. It was an exciting time. In 1975, Riley became a full-time artist. His career eventually took him through Europe and to India, where he lived for a while before returning to Oklahoma to teach again.

He taught at Northeast High School before joining the SWOSU faculty, where he served several years as department chairman. The Patrick Riley Art Exhibition is a homecoming.

“Southwestern has always been very supportive of the arts, so I felt like I was having a good time going back to show my show there,” he said.

Through the exhibit, Riley has connected with many SWOSU art students. Many of them, he said, will likely go on to teach.

Riley hopes to convince students to stay in Oklahoma. Many assume it’s necessary to move away to further their careers. Riley said his story is proof that artists can find success at home.

“We can keep our creativity here, and so that’s what I was pushing with them to let them know that can happen,” he said. “That’s what this show represents.”

Teacher attrition, especially in the arts, has long been a problem in the state, Riley said.

“People are always looking for, ‘Why have the arts?,’” he said. “This is one of those programs where you can really measure the difference, when an artist comes and talks to the kids that are going to stay in Oklahoma and teach about successful teaching methods and successful art methods right here in the state.”

The Patrick Riley Art Exhibition is funded by an Oklahoma Arts Council grant. Riley belongs to the council’s roster of teaching artists and participates in school residencies across the state.