Gallery owner's exhibit is culmination of her artistic endeavors 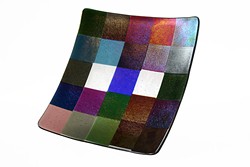 When Jann Jeffrey was young, she was already manipulating her environment to suit her sense of aesthetic, grounded in reality or not.

“One of my first memories, I was quite young, and I had a set of watercolors. And on the fence in the yard, I had painted a redbud tree and chrysanthemums,” Jeffrey said.

Her mother’s response was to shake her head and inform Jeffrey that the two did not bloom at the same time. When Jeffrey boldly decided to pursue a degree in fine art, her parents were less than enthusiastic.

“It’s not so much that they disapproved; I just think they didn’t understand,” she said.

She has worked with glass since she was in college, and she immediately fell in love with it. She has a bachelor’s degree in fine art from the University of Oklahoma and a Master of Fine

Art from Stephen F. Austin State University in Nacogdoches, Texas. She has continued her studies throughout her career, including a stint at Savannah College of Art and Design, where she studied printmaking. She works with various media, but etchings and glasswork are the two she gravitates toward.

“I still work in printmaking when I can, but it can be difficult,” she said. “I don’t have my own equipment, and sometimes the printmaker’s schedule doesn’t work with mine.”

She doesn’t have the same issue with making glass. About a year ago, she traveled to Santa Fe, New Mexico, and came back with a kiln. Bullseye Glass Company had recently opened a location in Santa Fe.

Jeffrey spent about seven months experimenting on her own. Much like working with ceramics, she said that something she particularly enjoys is that you never know what will come of your project until you open the kiln.

“Some of my first projects I was quite pleased with,” she said. “Some were disasters, but that’s how it goes. That’s how you learn.”

Her current show, Glass II, is a continuation of the November show, Glass, and features more mounted, framed and loose plates along with multimedia featuring glass elements. Each is a demonstration in color and texture.

Jeffrey moved back to Oklahoma with her husband when he retired. Up until she saw her current gallery space, she had been renting a studio apartment and participating in group shows.

Jeffrey said she spent the following months with her nose practically pressed to the window. She claimed she didn’t have the experience to run a gallery of her own, but property owner and Paseo legend John Belt assured her it wasn’t a big deal.

The night of Jeffrey’s opening, Belt was in the hospital. Still confident in her abilities, Belt sent his wife, Joy Reed Belt, to photograph the event. He passed away that week, but his spirit remains in the Historic Paseo Arts District.

Glass II runs through the end of the year, and Jeffrey plans to add more pieces as the mood strikes.