A proposed roundtable session to discuss the ballot initiative petition became an anti-State Question 807 session when authors and proponents of that initiative failed to show and the writer of State Question 808 walked out after reading his proposed constitutional amendment. 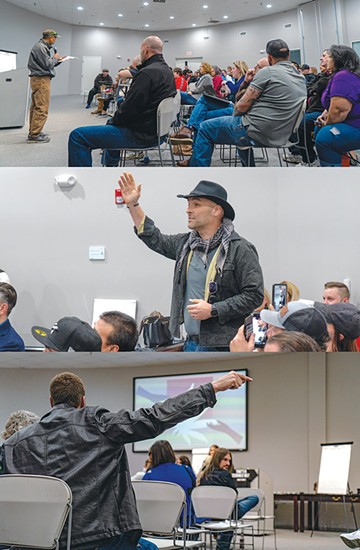 About 100 people showed up for the discussion, held at the CBD Plus headquarters, 4001 SW 119th St., on Friday evening. It was also livestreamed through Facebook for the duration. Video of the session, which lasted about two and a half hours, is still available online.

Leigh Ann Bryson acted as the facilitator for the event. She led the group through an introductory discussion. She opened the discussion by requesting input from the audience on the current state of the Oklahoma medical cannabis program and opinions about these adult-use, or recreational, petitions. The crowd was almost universally opposed to SQ807.

“I feel like corporations are trying to take advantage of patients. I think we’ve got corporate PACs coming in from out of state that have screwed other states over and we need to come together as patients and fight the hell out of this,” Chelsea Marlett-Kennedy said.

Marlett-Kennedy is a grassroots cannabis activist who was involved in getting State Question 788 on the ballot and passed.

“[State Question]788 was written by committee. There were meetings across the state. We all came together; we wrote [SQ]788. I don’t think the Oklahoma cannabis community is going to want anything less. That’s just my opinion,” she said.

“For the first time you’re in Oklahoma, you see a small business school that is taking families and putting money in their pockets. You’re starting to see generational changes and people being able to afford education. This is a big deal. It’s an opportunity of a lifetime and it is one of the best medical states I’ve ever been to,” Jeremy Cooper said.

Cooper is a chef and research scientist who spent years in Washington before coming to Oklahoma to work in its cannabis industry. He successfully used cannabis to fight stage four cancer.

After gathering initial input, some attendees started getting impatient. Many mistakenly assumed that Bryson was a proponent or author of SQ807. When she revealed that she was not and had only assumed the role based on her previous arbitration experience, a small revolt ensued.

Many people who were in attendance, like Paul Tay, who wrote SQ808, were under the impression that those behind SQ807 would be appearing to defend and explain their ballot initiative.

“I don’t know if you guys realize that there’s actually two state questions. I filed State Question 808 right after, 15 minutes after they got in. [SQ]808 is a reaction to 807. I’m not pushing anything. I’m just reacting to what they’re doing. My understanding of why I’m here tonight is I was led to believe that we were going to have [SQ]807 people here and the [SQ]808 people here, me, to debate and pitch our particular bills and go from there,” Tay said.

“There’s a lot of miscommunication because we all have different interests and why we’re here, as you can already hear. Some came to hear [SQ]807; some came to hear the people who wrote the bill. Some people came to have their voice heard. A lot of different people came for different reasons. What I’m trying to do is find out, Is there a common ground for most people here that want to accomplish something tonight while you’re here in an hour, two hours? Do you want to talk about the bills? Do you want to dissect the bills?” Bryson said.

“There’s a lot of miscommunication
because we all have different
interests and why we’re here,
as you can already hear.”—
Leigh Ann Bryson tweet this

Some who had driven up to three hours to attend and taken time off from their cannabis businesses became irate and expressed that they felt they had been misled about the nature of the event. A number stormed out at that point.

Tay then read his proposed ballot initiative in full. Afterward, the crowd made arguments against it.

“One of the reasons I wrote the way I wrote it on tape, I’m taking cues from the US Constitution, the Federal Federalist Papers. … I’ve taken a cue from Ron Durbin, who told me, ‘Keep it brief; keep it flexible,’” Tay said.

Durbin is a Tulsa-based cannabis attorney. He was not in attendance.

“I was not going to come, but I’m here and now here, and what I’m hearing and what I’m seeing is exactly what I thought it was going to be,” Greg Wilson said.

Wilson, AKA Chilly Mack, is one of the owners of Mr. Mack’s Cannabis Co., a popular brand that started as an edibles line.

“It’s us trying to figure it out, right? But everything that I’m hearing is not figuring it out,” Wilson said. “We’re talking about [SQ]788 and how to improve [SQ]788 and the state of our industry here right now, and I see a bunch of influencers in this building. I see a bunch of key players in this building. So the people that can move the needle are here, but what we’re talking about isn’t moving the needle. We need to be talking about, What are we going to do about [SQ]807? Are we going to come together and vote no and educate the people? Are we going to create a competing initiative that’s just gonna waste time and then before we know it, they’re already getting their signatures, it’s going to be on the ballot anyway. We need to focus on beating [SQ]807 and not what the state of the industry is right now.”

At that point, Tay jumped in again, hinting at a challenge during the 10-day period after the proposed ballot initiative is published. He referred to it as “the cannabis nuclear option” but did not elaborate.

Soon after, there was a break in the discussion during which a few dozen people left. The second half of the session was largely spent drafting ideas for a path forward along with a discussion directed by Shelley Free, former executive director of Oklahomans for Health, an organization that had a large role in the passage of SQ788. The discussion was abruptly ended at about 8:30 p.m. with about two dozen still participating.