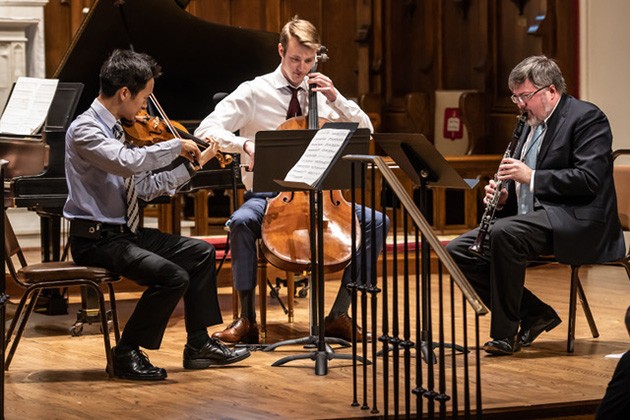 The works selected for Brightmusic Chamber Ensemble’s upcoming concert all sound significantly different, co-artistic director and clarinetist Chad Burrow said, but he recommends you listen to them in the same way.

“Essentially, you can think of each of the four pieces like you’re walking through a garden,” Burrow said. “Each of them has different aspects, different beautiful things to look at and peculiarities. The name is not so much reflective of the pieces themselves; it’s just the idea of each of them having something very different to say artistically. … If someone goes into an art gallery or a garden, as they go from one idea or one painting or one plant, they’re viewing one thing at a time, and it has its own world that you can look at and you can enjoy and then you move on to the next thing. Each of the four pieces are very distinct in that way. … Sometimes there are pieces that you think the audience should hear that fall neatly into a program, and other times they don’t.”

Brightmusic plays Rustic Gardens 7 p.m. Tuesday at Saint Paul’s Cathedral, 127 NW Seventh St. Burrow said the concert features “everything from modern all the way back to Mozart with a couple of major signposts in between,” but the title’s “rustic” descriptor was actually inspired by its most recent work — American composer Libby Larsen’s Barn Dances, which premiered in Dallas in 2001.

According to the composer’s note on Larsen’s website, “Barn Dances is a set of four abstract pieces for flute, clarinet and piano. Each piece draws its title from the name of a particular dance step used in cowboy dances. Taking the name of the step as the point of departure, my idea was to take a flight of fancy in each movement and to create the musical equivalent of a character drawing.”

Barn Dances’ four pieces are named after square dance terms such as “Forward Six and Fall Back Eight” and “Rattlesnake Twist.” The second piece, titled “Divide the Ring (Homage for Gene Autry),” is inspired by the “cowboy swing” of songs such as “Don’t Fence Me In,” a 1934 song by Cole Porter and Robert Fletcher popularized by Autry, Roy Rogers and Ella Fitzgerald.

“Embedded within each piece is a rhythmic feature that comes from a particular dance step,” Burrow said. “Not being an expert in square dancing and what [Larsen] calls ‘cowboy dances,’ I can’t tell you what those are, but you’ll hear things in the first movement like open fifths that sound like fiddling in between the instruments, in the piano, the clarinet and the flute. So there are notes, you might say, of the cowboy element throughout, and some of them will be overt and obvious, and others are more hidden. I don’t think there’s any fear of anyone standing up and square dancing. … The rest of the music is fairly highbrow in relation to that piece.”

Each of the concerts in Brightmusic’s current season features a work by a female composer, Burrow said, and Larsen is “one of the most brilliant composers still writing.”

“I think her music is just fantastic,” Burrow said. “It’s always interesting and creative; sometimes there’s an element of Americana. … Her style is very relevant and contemporary and quite wonderful, in my opinion.”

Barn Dances will be followed by German composer Carl Maria von Weber’s “Clarinet Quintet in B flat major.” Burrow said the piece, written between 1811 and 1815 for clarinetist Heinrich Baermann, “exploits the clarinet for its full virtuosic potential.”

“Weber himself was an opera composer, and the work is operatic,” Burrow said. “It features the clarinet prominently. The strings have more of an accompanimental role in this particular work, although it’s a vital role, but again, it’s one of the most brilliant works for the clarinet in the 19th-century chamber repertoire. It’s a work that I play regularly; it’s a big, audience-friendly piece; it’s enjoyable; it’s tuneful. It shows off the clarinet, frankly. … It’s a wonderful example of what composers were doing at the beginning of the 19th century. … They were really exploring the potential, artistically and technically, of the instruments.”

In contrast, Austrian composer Wolfgang Amadeus Mozart’s “Quartet No. 1 for Flute and Strings in D major,” which will follow Weber’s quintet, was written on commission in 1777 for amateur flutist Willem Britten de Jong.

“Only three or for decades separate the composition of the two pieces, but they’re really in quite different universes,” Burrow said. “Mozart never sounds, in my opinion at least, as if he’s merely showing off. There’s always an integrity to what he’s doing. Weber is unashamedly showing off the clarinet.”

In a letter to his father, Mozart complained that he had difficulty writing for an instrument that he “cannot bear,” but nevertheless, German musicologist Alfred Einstein wrote that the quartet features “perhaps the most beautiful accompanied solo ever written for the flute.”

“Sometimes there are pieces that you think the audience should hear that fall neatly into a program, and other times they don’t.”
—Chad Burrow tweet this

“The work is incredibly tuneful,” Burrow said. “It has a beautiful, slow movement with pizzicato strings where the flute just sustains this gorgeous melody. It’s classic early Mozart. There’s some brilliance, certainly for the flute, but its overwhelming tunefulness is something that I think the audience will take away from this. Mozart wrote a great deal for the flute. ... He knew the instrument well and knew how to make the flute sound particularly good.” 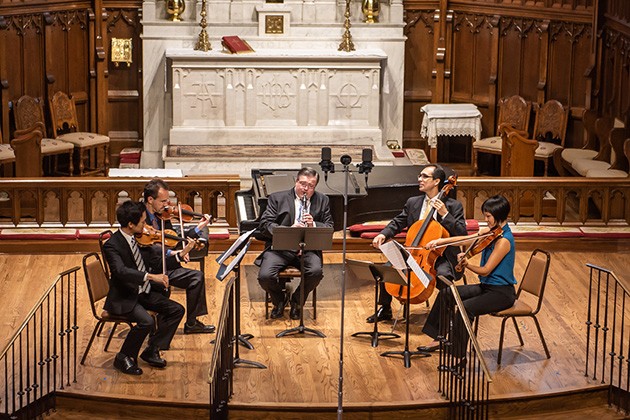 Flutist Amy Porter, winner of Japan’s Third Kobe International Flute Competition and professor at University of Michigan, and pianist Stephen Buck, professor at Purchase College, State University of New York will be featured guest artists. The concert will conclude with Austrian-American composer Arnold Schoenberg’s “Chamber Symphony No. 1 in E major,” arranged by Anton Webern for violin, cello, flute, clarinet and piano. Composed in 1906, the piece is a bridge between Schoenberg’s early Romantic-influenced work and the atonal pieces that would follow.

“It’s kind of the final vestiges of late 19th-century German Romanticism,” Burrow said. “‘Emancipation of dissonance’ is the phrase that’s used oftentimes to describe what is about to come. This is the last piece he’s going to write that falls within this more tonal, romantic framework, literally before the 20th century and modernism come to the fore. … It is progressive in that it takes the 19th-century harmony and form to the breaking point and it is also very much looking backward in that it hasn’t quite broken free.”